50 arrested for attack on Hindu temple in Pakistan 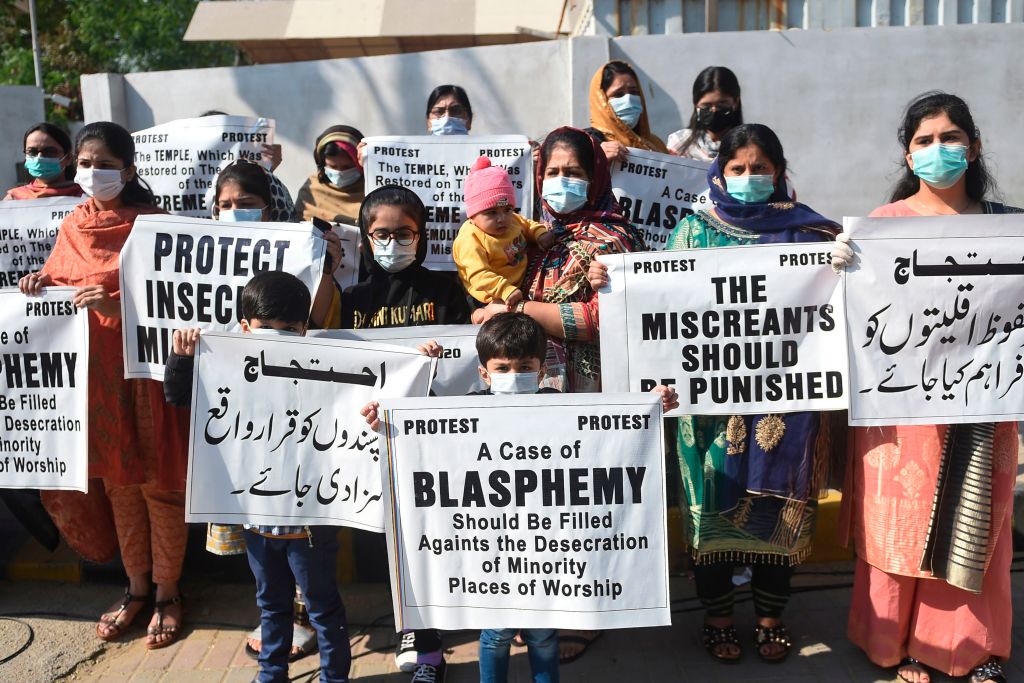 A file photo of Pakistan Hindu Council members holding a protest against a mob attack on a Hindu temple in a remote village in Karak district, in Karachi on December 31, 2020.(Photo by RIZWAN TABASSUM/AFP via Getty Images)

PAKISTAN’S law enforcement agencies have arrested more than 50 people, including the main suspects, allegedly involved in an attack on a Hindu temple in a remote town of the country’s Punjab province.

The arrests were made a day after the Supreme Court admonished the authorities for their failure to protect the temple.

Some 150 people were booked in connection with the attack which took place on Wednesday (4).

A mob attacked the temple at Bhong town of Rahim Yar Khan district of the province, some 590 km from Lahore, in protest against the release of an eight-year-old Hindu boy, who was arrested for allegedly urinating in a local seminary.

“More than 50 suspects have been arrested so far through analysis of video footage in a shameful ransacking incident at a temple in Rahim Yar Khan,” Punjab chief minister Usman Buzdar tweeted on Saturday (7).

“We will make sure that no such incident happens (in the future). Besides, the restoration work of the temple has been underway at full speed,” he said.

He also shared the photographs of some of the arrested people on his social media account.

An FIR has been registered under terrorism and other sections of the Pakistan Penal Code against more than 150 people for their involvement in attacking the temple, he said.

Pakistan’s Supreme Court on Friday (6) pulled up the law enforcement authorities for failing to stop the attack and ordered the arrest of the culprits, observing that the incident tarnished the image of the country abroad.

Chief Justice of Pakistan Gulzar Ahmed said the vandalism at the temple had brought shame to the country as police acted like silent spectators.

The chief justice wondered at the arrest of the eight-year-old boy and asked whether the police were incapable of understanding the mental capacity of minors.

Pakistan’s parliament on Friday (6) condemned the temple attack by adopting a resolution.

India on Thursday (5) summoned the Pakistani charge d’affaires in New Delhi and lodged a firm protest, expressing concerns at the incident and the continued “attacks on the freedom of religion” of the minority communities and their places of religious worship in Pakistan.

The majority of Pakistan’s Hindu population is settled in Sindh province where they share culture, traditions and language with Muslim residents. They often complain of harassment by extremists.