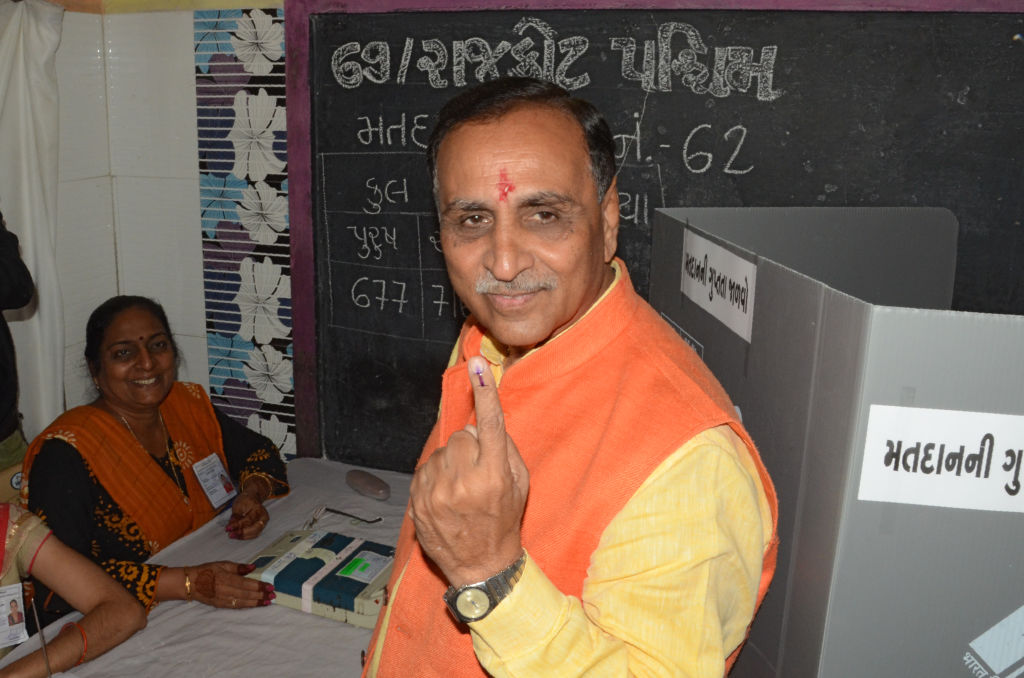 Vijay Rupani shows his inked finger after casting his ballot during the first phase of assembly elections of Gujarat state at Rajkot on December 9, 2017. (Photo by AFP via Getty Images)

AS Bhupendra Patel took charge as the chief minister of Gujarat from Vijay Rupani, there was speculation as to what led to the change of guard in the western Indian state.

The perceived “mismanagement” of Covid-19 by the Rupani government and his differences with other leaders of the ruling Bharatiya Janata Party (BJP) at the state level are rumoured to be possible reasons for his “sudden” resignation. But those who follow Gujarat politics felt the development was “not unexpected” and “neither was it due to the virus”.

Senior BJP leaders in charge of prime minister Narendra Modi’s home state are believed to have held discussions for quite some time in the lead-up to Rupani’s resignation. The party brought in Patel, a leader from the numerically significant agrarian Patidar community, to consolidate its “social base”, according to observers.

Softly-spoken Rupani is a Jain, a community that makes up for just two per cent of the state’s total population of 64.7 million, while Patidas account for 12.3 per cent. Patidars have been rallying behind the BJP for more than two decades, helping the party secure a clear mandate in election after election.

Some believe that the BJP could suffer from possible anti-incumbency sentiment when Gujarat goes to the polls next year and that the state needs a fresh face to avert defeat.

Political analyst and veteran journalist K Subrahmanya said the party’s move to replace Rupani with Patel is driven by its strategy to blunt the rival Indian National Congress Party’s attempt to woo Patidars.

Some members of the community have held protests since 2015 that often turned violent, but their demand for reservation in government jobs and education has not been met.

Meanwhile, the Congress is trying to win over Patidars who, it feels, have felt alienated from the ruling party, Subrahmanya told Eastern Eye, adding that the BJP may have believed it could not ignore the aspirations of the community and hence, brought in Patel.

“Patidars are numerically too big to ignore, particularly in the Saurashtra region and the BJP intends to take the community along by making Patel the chief minister”.

“Politics is managed on two major factors – public goodwill leaders enjoy as Modi does, and the backing from main social classes. Rupani has the goodwill of people, but the BJP leadership wants to consolidate its social base too”, he said.

Subrahmanya disagreed that the perceived “mismanagement” of the pandemic could be a reason for Rupani’s exit as the chief minister. His reasoning is that coronavirus has not spared any state and it is not specific to Gujarat.

Despite the BJP’s emphatic win in the last two parliamentary polls, sweeping all the seats in Gujarat in 2014 and 2019, the party’s electoral performance has not been convincing in local elections. In fact, it just managed to win the assembly election last time.

Prof Sandeep Shatry, another noted political analyst, said the charisma of the BJP’s central leadership – Modi – saved the party in the last state election in 2017 when Rupani was the chief minister. It called for a “new, more credible face” at the local level to take over the reins.

The BJP cannot always depend on the prime minister to swing elections in the party’s favour, Prof Shastry told Eastern Eye.

“The party has understood the need to bring in a new leader to beat anti-incumbency. The new chief minister is not very young at 59, but he is a fresh face nevertheless”, he said.

Rupani, who joined the Hindutva outfit Rashtriya Swayamsevak Sangh (RSS) at a young age and has been a member of the BJP since its inception, said after his resignation on Saturday (11), “I was given the opportunity to serve the state for five years. I will further do whatever is asked by my party.”

The BJP also changed its chief ministers in the northern state of Uttarakhand, which will go to the polls next year, and in Karnataka in the south where elections are due in 2023.

But both Subrahmanya and Prof Shastry said the party is unlikely to replace Yogi Adityanath as the chief minister of Uttar Pradesh, the country’s most populous state, before the assembly elections due early next year.