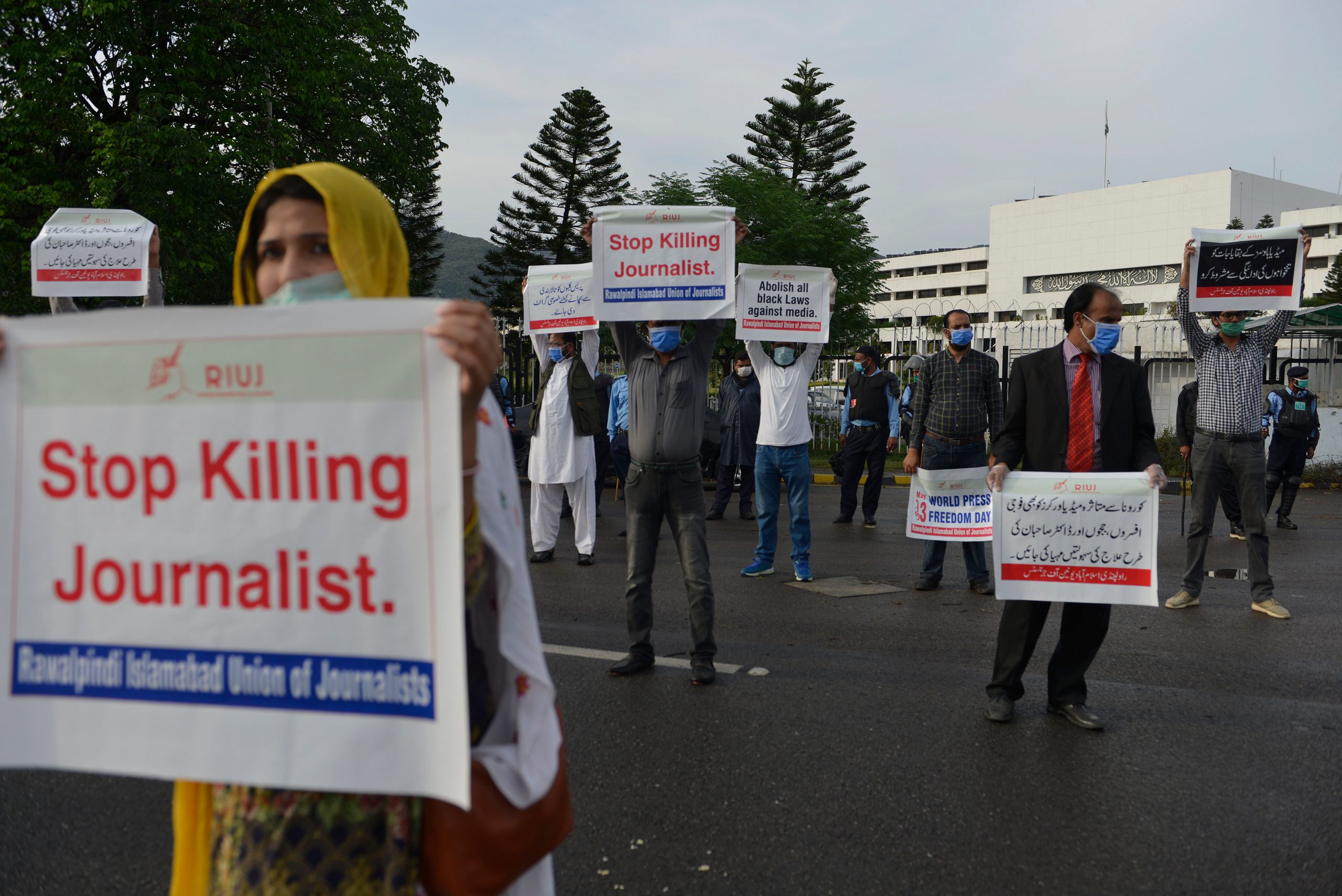 Journalists stand maintaining social distancing in a demonstration to mark the World Press Freedom Day during a government-imposed nationwide lockdown as a preventive measure against the COVID-19 coronavirus, in Islamabad on May 3, 2020. (Photo by Farooq NAEEM / AFP) (Photo by FAROOQ NAEEM/AFP via Getty Images)

THE Amnesty International, Human Rights Watch and the International Commission of Jurists have demanded that Pakistani authorities should ensure all journalists can do their jobs without fear of intimidation or reprisals.

After the suspension of Pakistani journalist Hamid Mir as he spoke of press freedom at a protest in Islamabad, a serious concern has been raised globally.

The organisations are calling on the Pakistan government to conduct prompt, impartial and effective investigations into recent attacks, and ensure those suspected of criminal responsibility are promptly and fairly prosecuted. The government should also rescind official policies that protect the authorities from criticism.

Human Rights Watch Asia director Brad Adams said, “The frequency and audacity with which journalists are being attacked in Pakistan is appalling. The Pakistani authorities should bring those responsible for  these attacks to justice and ensure that all journalists can do their jobs without fear of intimidation or reprisals.”

“If the authorities are committed to upholding their human rights obligations, they must take decisive steps against censorship, harassment and violence against journalists. For that, continued impunity must be dismantled,” said Amnesty International South Asia deputy regional director Dinushika Dissanayake.

On May 25 2021, journalist Asad Ali Toor was assaulted by three unidentified men who forcibly entered his apartment in Islamabad. Toor said they identified themselves as being from a security agency, interrogated him about the “source of his funds,” and took away his mobile phone and other electronic devices. On May 29, the news channel Geo “suspended” Hamid Mir, one of Pakistan’s best-known television talk show hosts, after Mir spoke at a protest in solidarity with Toor.

On April 20, an unidentified assailant shot and wounded Absar Alam, a television journalist, outside his house in Islamabad. Alam has been a prominent critic of the government. On July 21 2020, an unidentified assailant abducted journalist Matiullah Jan in Islamabad the day before he was to appear before the Supreme Court for allegedly “using derogatory/contemptuous language and maligning the institution of judiciary.” Jan was released after a few hours. He alleged the abduction was an attempt to intimidate him. A criminal case was registered for Jan’s abduction, but no suspects have been arrested.