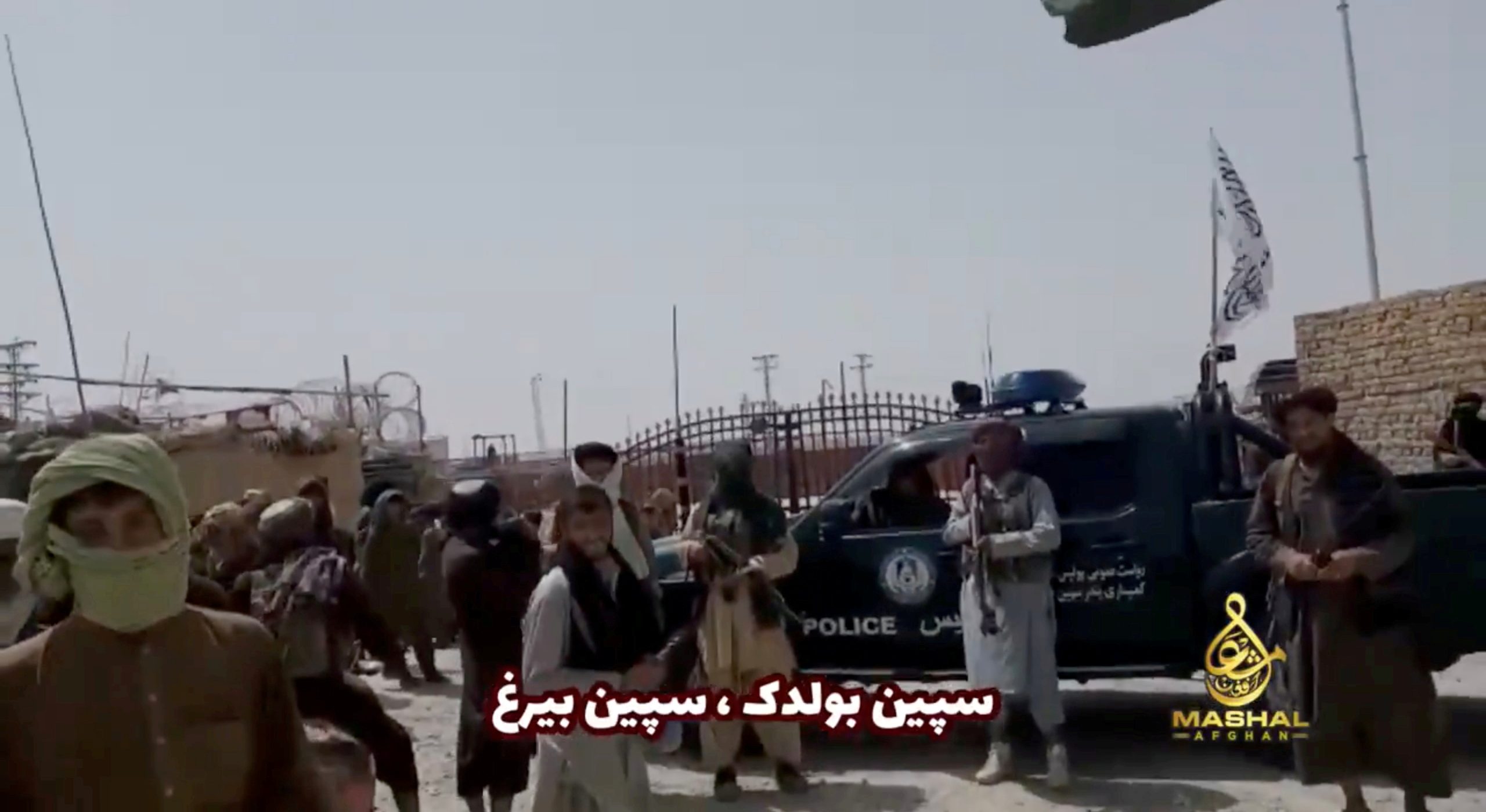 People stand in front of the friendship gate of Afghanistan and Pakistan at the Wesh-Chaman border crossing, Spin Boldak, Afghanistan, on July 14, 2021, in this screen grab obtained from a video. TALIBAN HANDOUT via REUTERS / File Photo

THE Taliban closed a key border crossing with Pakistan on Friday (6), saying no one would be allowed through it until Islamabad dropped or relaxed its visa requirements for Afghans.

The Taliban, wresting control of a large part of Afghanistan in the wake of the withdrawal of US and other foreign troops, last month captured the southeast Chaman-Spin Boldak border crossing from Afghan forces.

Pakistan initially closed its side of the crossing, a landlocked Afghanistan’s second busiest entry point and main commercial artery to the sea, before reopening it last week.

But since the Taliban took control of Chaman-Spin Boldak, Pakistani border officials have begun enforcing visa requirements for Afghans which previously were not as strictly observed.

In a statement on Friday (6), the Taliban called on Pakistan to scrap all visa requirements for Afghans.

“(The crossing) will remain closed for all types of commuting, including transit and trade for both sides and pedestrians, until the Pakistani side leaves the gate open, morning to evening, for Afghans holding [Pakistani issued] migration cards or ID cards,” the insurgent group’s shadow governor for Kandahar province said in the statement.

Since US-led foreign troops began leaving Afghanistan earlier this year, fighting between the Taliban and Afghan forces has escalated significantly. In recent weeks, the Taliban have advanced rapidly on provincial capitals and targeted top government officials inside Kabul.

The hardline Islamist insurgents have also taken control of several border crossings, including with Iran and Central Asian countries, but the crossing with Pakistan provides a significant customs revenue.

Ensuring it is open for visa-free travel would not only curry favour with ordinary Afghans but also shore up a route to parts of Pakistan that have historically housed the insurgent group’s fighters and part of its leadership.

Afghan government data indicates the route was used by 900 trucks a day before the Taliban seized it.

The closure could impact the import of medicines and other essential goods as violence has sharply escalated in Afghanistan amidst a pandemic, with the United Nations saying hundreds of thousands have been displaced internally.

Spokespersons for Pakistan’s foreign and interior ministries did not respond to requests for comments.

Pakistani border officials at Chaman said the Taliban had placed concrete barriers to block the road on their side of the Friendship Gate, the crossing point between the two countries.

Pakistan responded by closing its side of the border on Friday (6), leaving pedestrians, passenger vehicles, and cargo trucks stranded.

Many Afghans living in Pakistan have been issued migration cards by Islamabad allowing them to stay, but those who want to enter Pakistan now need to obtain a visa. Pakistan and the Taliban have long shared close relations – though Islamabad says its support for the Taliban ended after the 2001 US-led invasion of Afghanistan.

Western capitals and Kabul say Pakistan’s support to the Taliban continues and many of its leaders have safe havens in the country – which Islamabad denies.

Pakistan is considered key in convincing the Taliban to participate meaningfully in peace talks with the Afghan government.