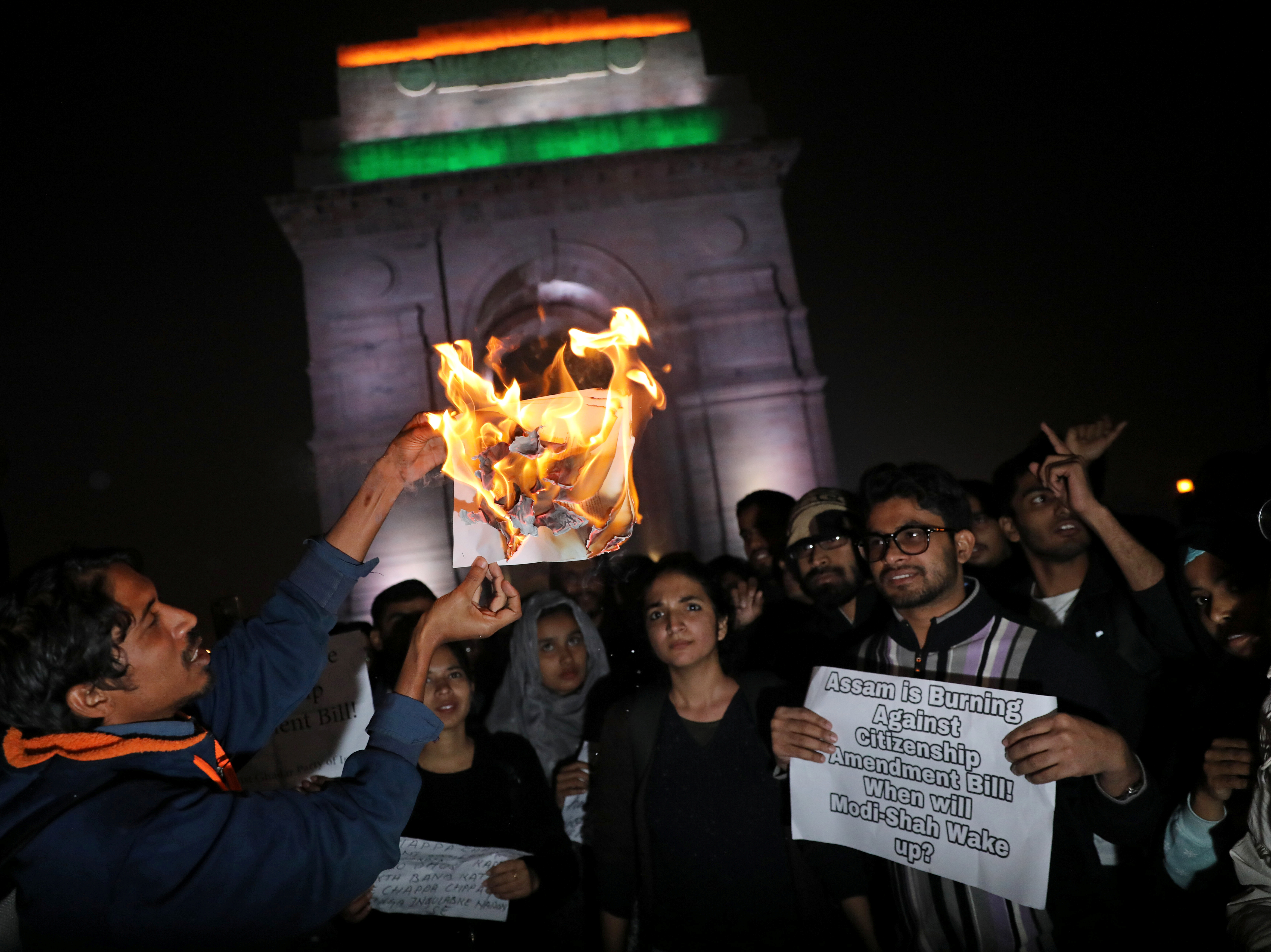 Demonstrators burn a copy of Citizenship Amendment Bill, a bill that seeks to give citizenship to religious minorities persecuted in neighbouring Muslim countries, during a protest in New Delhi, India, December 12, 2019. REUTERS/Anushree Fadnavis
Follow Us

Angry protesters in northeast India vowed on Sunday to keep demonstrating against a contentious citizenship law as the death toll from bloody clashes sparked by the bill rose to six.

Tension remained high at the epicentre of the unrest in Assam state’s biggest city, Guwahati, with troops patrolling the streets.

In Assam, four people died after being shot by police, while another was killed when a shop he was sleeping in was set on fire and a sixth after he was beaten up during a protest, officials said.

Some 5,000 people took part in a fresh demonstration Sunday in Guwahati, with hundreds of police watching as they sang, chanted and carried banners with the words “Long live Assam”.

The legislation, passed by parliament on Wednesday, allows New Delhi to grant citizenship to millions of illegal immigrants who entered India from three neighbouring countries on or before December 31, 2014 — but not if they are Muslim.

Besides stoking concern among Muslims, the proposed changes have also led to protests by residents unhappy about an influx of Hindus from Bangladesh who stand to gain citizenship.

“Assam will continue to protest. India is a democracy and the government has to listen to us,” said Karan Mili, a colleague of one of the victims, 25-year-old Iswor Nayak, who died Sunday.

“We don’t want violence but protests will continue… Assamese will not stop until government revokes the law,” another demonstrator, Pratima Sharma, told AFP.

Officials said oil and gas production in the state were hit by the curfew, although the restrictions were eased during the day Sunday with some shops opening.

In West Bengal state, where protests stretched into a third day, chief minister Mamata Banerjee — who has spoken out against the national government’s push for the law — suspended internet service in several districts.

Demonstrators set fire to tyres, staged sit-ins on highways and railway tracks, and torched trains and buses, with riot police brought in to disperse protesters and train services suspended in some parts of the east.

Some 35 people injured in the clashes were taken to hospital, the Press Trust of India reported, while authorities said schools in the area would be closed on Monday.

Police also entered Delhi’s Jamia Millia Islamia University after the clashes to detain some people, although the institution said its students did not take part in the violence.

“To give respect to those who fled to India and were forced to live as refugees, both houses of parliament passed the Citizenship Amendment Bill,” he said at a rally in eastern Jharkhand state.

“Congress and its allies are stoking fire over the Citizenship Act but the people of the northeast have rejected violence… They (Congress supporters) are resorting to arson because they did not get their way.”

“Culture, language, social identity and political rights of our brothers and sisters from the northeast will remain intact,” Shah added in Jharkhand, News18 television network reported him as saying.

For Islamic groups, the opposition, rights activists and others in India, the new law is seen as part of Modi’s Hindu nationalist agenda to marginalise India’s 200 million Muslims. He denies the allegation.

Rights groups and a Muslim political party are challenging the law in the Supreme Court, arguing that it is against the constitution and India’s secular traditions.

Asom Gana Parishad — an ally of Modi’s Bharatiya Janata Party in Assam which had supported the bill in parliament — told local media it now intended to challenge the law in the Supreme Court.