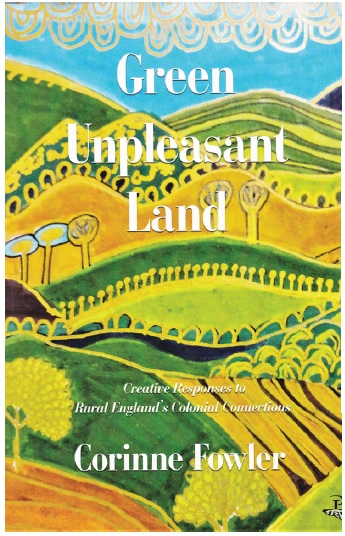 AN ACADEMIC has explored the British countryside’s links to em­pire and slavery in her new book.

“I could have called it Green Un­pleasant Land with a question mark,” acknowledged Fowler. “But I just wanted to signal that the book was disrupting our more traditional views of the countryside.

“‘Green and pleasant land’ is something which gives us a feeling of nostalgia, of love for the country­side. But I wanted to slightly trouble that feeling. Hence the provocative title.

“I’m looking afresh at the English coun­tryside. I’m trying to open up its histories of connection to the British empire, to the East India Company and to transatlantic slavery in particular.”

Fowler was among the academics who last September brought out a National Trust report revealing that 93 of its proper­ties were financed either by the slave trade or colonial loot from empire.

The book does make the point: “Despite Blake’s call to ‘love the human form/ in heathen, turks and jew’, Jerusalem has been enlisted to support racially exclusive visions of rural England as a space of whiteness which supposedly has always been that way.

“Historically, then, the countryside is a terrain of inequalities, so it should not sur­prise us that it should be seen as a place of particular hostility to those seen not to be­long, principally black and Asian Britons.”

Fowler revealed she has come under sustained attacked from right-wing tab­loids, commentators and MPs for suggest­ing that Britain’s empire was anything oth­er than glorious.

“It just seems like every time I speak, they use it as an opportunity to attack me,” she said. “It’s a horrible rehashing of all the accusations that I’m politically motivated, that I’m not qualified to do the work (even though she has a first-class degree), just the same thing over and over again.

“I have had to take my email off my web­site because I get horrible threatening e-mails. Whatever I say seems to get twisted.”

Fowler said the report from the National Trust is “called interim because it’s a work­ing document. So when new information comes to light, it’s added to the document.”

It seems unlikely that her detractors have actually read Green Unpleasant Land, which is an evidence-based and scholarly history of rural Britain and its links to the outside world.

The book recounts how director Danny Boyle’s decision to put black people into the countryside during his evocation of a “green and pleasant land” in the London Olympics opening ceremony on July 27, 2012, irritated a number of people. One Tory MP tweeted: “Thank God the athletes have arrived! Now we can move on from leftie multi-cultural crap. Bring back Red Arrows, Shakespeare and Stones.”

The author notes that “the countryside is widely viewed as having everything to do with whiteness and little to do with empire, and suggestions to the contrary typically encounter strong opposition”.

A “second point of departure is the rela­tionship between empire and rural Britain. Here the book unites discussions by re­searchers of the East India Company and black Atlantic studies. Eighteenth-century paintings testify to this presence, depicting black children as the trophies of aristo­cratic families,” it is disclosed.

In her interview with Eastern Eye, Fowler emphasised that the black presence in Brit­ain did not begin with Windrush.

The book says: “Returnee planters and nabobs sometimes brought or sent back their mixed-race children from the Carib­bean and India, although such children were only rarely acknowledged as legiti­mate heirs.”

Fowler said: “David Dabydeen writes wonderfully about the mistreatment of child servants, enslaved children, in his novels, especially in A Harlot’s Progress. Fundamentally, these were kidnapped children taken from their families, traf­ficked over to Britain and the violence of that alone speaks volumes.”

There is the suggestion that Heathcliff in Emily Brontë’s 1847 classic novel, Wuther­ing Heights, might have been a black man, although his ethnicity was never spelt out.

Fowler said: “The mystery is part of the construction of the novel. But what histori­ans are interested in is the degree to which the area in which the Brontë sisters lived was so engaged with slave ownership.”

She shows how country houses and their gardens – stone pineapples in them re­minded owners of estates in the Caribbean – were financed either by the slave trade or fortunes made in India through the East India Company.

“One chapter adds the awareness that Britain’s black and Asian population has been disproportionately excluded from garden-based pleasures”, though it has to be said that the Royal Horticulture Society has informed Eastern Eye of its decision to become more diverse.

Readers will learn: “A common item in country houses was 18th century mahoga­ny – including much Chippendale furni­ture – which was invariably felled by en­slaved Africans in Jamaica, and Central and South America.”

Also, “tiger hunting – always popular with Indian rulers – escalated under the British Raj and there is a direct link be­tween colonialism and the decimation of tiger populations. By the 1930s, the Van In­gen taxidermy firms were processing 400 big cat skins a year.”

Fowler’s critics will not like her observa­tion that during British rule, it was India that lost so much wealth.

“It’s really important to correct that fal­lacy about the colonisation of India in any way benefiting the Indian economy, be­cause it quite clearly fleeced that economy in a way that was devastating.

“It’s fascinating the connection between, for example, country houses and the East India Company. In the book I write about Basildon Park. That estate and the house were bought and built with East India Company profit by Francis Sykes. And he brought back with him a servant from In­dia. The local records show that he then married a local woman in the village near­by – this was in Berkshire, then known as England’s Hindustan. There are living de­scendants of this servant today.”

She referred to another book: “In Chil­dren of Uncertain Fortune, Daniel Livesay tells the story of the Jamaican plantation owner, John Morse. Three of his mixed-race children – the descendants of an en­slaved mother – moved from Jamaica to London and from there to India, where the son worked for the East India Company in Calcutta. The daughters also travelled from London to India, each marrying East India Company servants (officials), coming back to England and featuring in a painting by Zohann Zoffany called The Morse and Ca­tor Family (1784).”