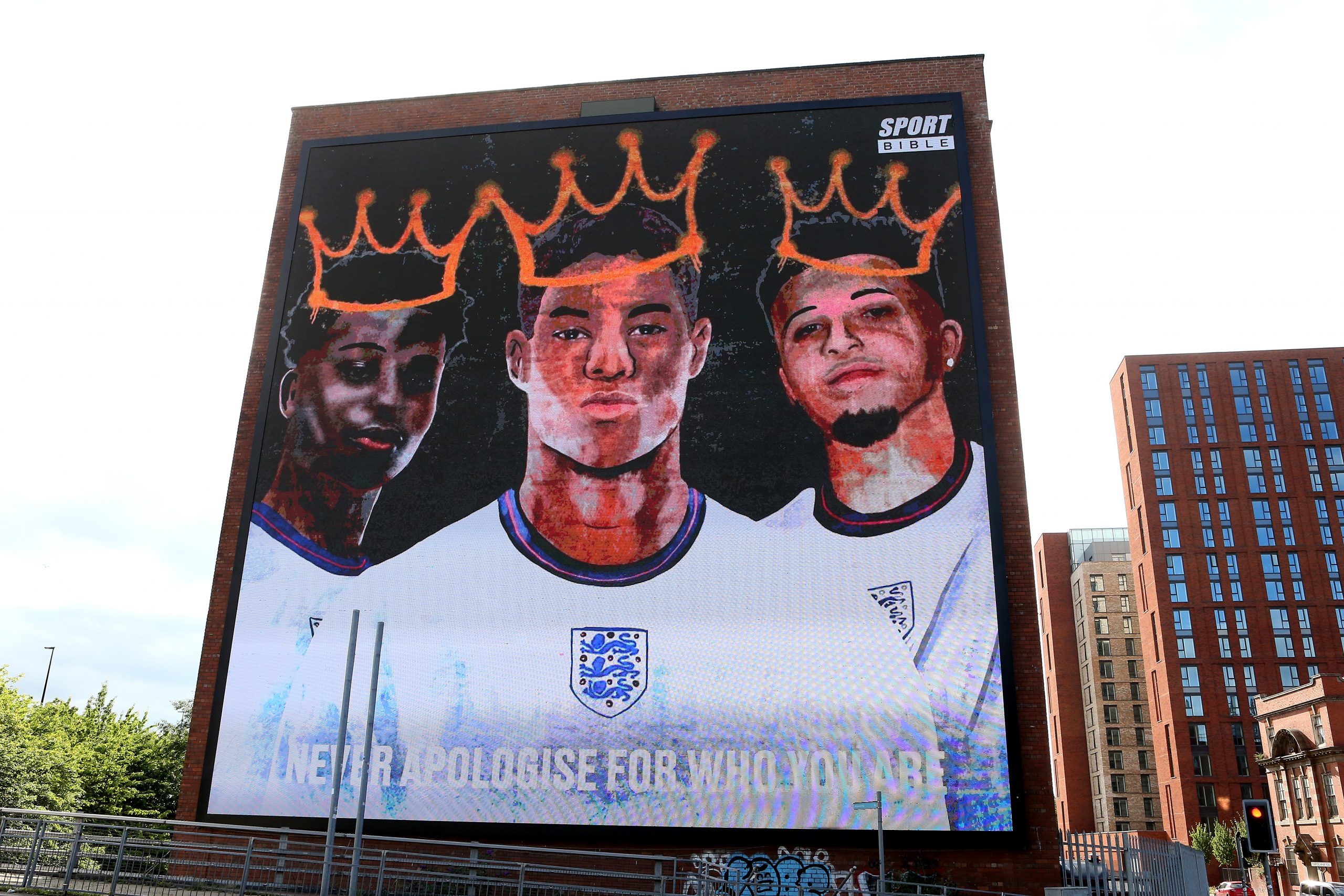 A giant mural in support of Marcus Rashford, Jadon Sancho and Bukayo Saka has been unveiled in Manchester. (Photo by Charlotte Tattersall/Getty Images)

A wave of solidarity swept the nation as England’s multi-racial football team made its way to the Euro 2020 final. While the team just fell short in the final against Italy – losing on penalties – this youthful band of brothers delivered the country’s best showing in a major men’s footballing tournament for 55 years.

Unfortunately, Marcus Rashford, Jadon Sancho, and Bukayo Saka – three incredibly courageous youngsters who missed their penalties – suffered a torrent of racial abuse on social media after the match. While some of this was undoubtedly from England ‘fans’, a notable portion of this abuse originated from foreign-based accounts. This has been overlooked by those who have sought to frame the appalling actions of hardcore-fringe bigots as representative of mainstream English public sentiments.

While it is completely understandable for players to be defensive over their team-mates, Tyrone Mings’ attack on home secretary Priti Patel was ill-conceived and counter-productive. Accusing her of stoking the flames of racism, simply because she labelled ‘taking the knee’ as a form of gesture politics, was far-fetched. The home secretary is well within her right to question political expressions which are closely associated with BLM – a social movement linked to radical objectives such as reducing investment in police forces, along with various kinds of public disorder.

It is also one which is far from unifying from an anti-racism perspective – with a November 2020 poll by Opinium finding that 55 per cent of people (including a plurality of ethnic-minority Britons) believed BLM had increased racial tensions. While she has been accused of emboldening racist bigots, it is worth remembering that Patel has personally created a bespoke immigration route for millions of Hong Kong residents who wish to escape Chinese-state totalitarianism.

For all its flaws, England remains one of the most tolerant, anti-discrimination, pro-equality nations on earth. While equality of opportunity can be strengthened, we can take pride in the socio-economic success and academic excellence which can be found in non-white communities – especially those of Indian and Chinese origin. More can be done to bolster police-community relations – but we should take as a positive the fact that around two-thirds of ethnic-minority people believe that the police for a force for good on the whole. And those who do suffer from discrimination can rely on some of the strongest equality bodies in the world.

Back in 2000, the Runnymede Trust produced a report examining race-related issues. Professor Bhikhu Parekh, the lead author, argued at the time that we had the best race relations in Europe and a “much more relaxed society” than other multi-racial nations such as France, Germany, and the United States. This still rings true today – with mainstream comfort over living in ethnically-mixed neighbourhoods and overwhelmingly tolerant attitudes towards inter-racial relationships demonstrating this very point. According to a 2019 study by British Future, nine in ten people in England reject the view that racial identity is integral to ‘Englishness’ – with a comfortable majority inclusively framing English identity in terms of civic duty and social contribution.

Parekh also said the notion that racism was widespread in our society was a “partisan and skewed” view. The Runnymede Trust – which now believes that racism is “systemic” in

England and that the system is “deliberately rigged against ethnic minorities” – falls into this category. Indeed, it has firmly established itself at the heart of the country’s ‘grievance-industrial complex’ – a social infrastructure where bad-faith actors exaggerate the problem of racism in the name of moral grandstanding and financial benefit. It is a sector-wide operation which seeks to keep the reductive ‘disparities = discrimination’ paradigm alive in the race-relations debate. By opportunistically placing racial identity at the forefront of discussions on complex forms of social and economic disadvantage, these self-interested entities cannot be treated as trusted contributors to the equality debate in England.

Some of the most severe and impactful disparities in our country are associated with family structure and regional location. Recent Office for National Statistics data showed that while six per cent of Indian-origin dependents (up to the age of 15) live in lone-parent households, this rises to 19 per cent for their white British counterparts and an astonishing figure of 63 per cent for their peers of black Caribbean heritage. It may not be politically correct to say so, but England is an international hotspot for family breakdown. It is also one of the most inter-regionally imbalanced nations in the industrialised world – with a swathe of left-behind post-industrial towns in serious need of improved public services and economic regeneration. The evidence suggests that family dynamics during childhood and where one is raised, can be hugely influential in determining one’s life chances.

Genuine advocates of equality in England will continue to be guided by the admittedly sensitive facts on the ground – not what is deemed to be culturally fashionable in some quarters.

Dr Rakib Ehsan is a founding signatory of Don’t Divide Us.