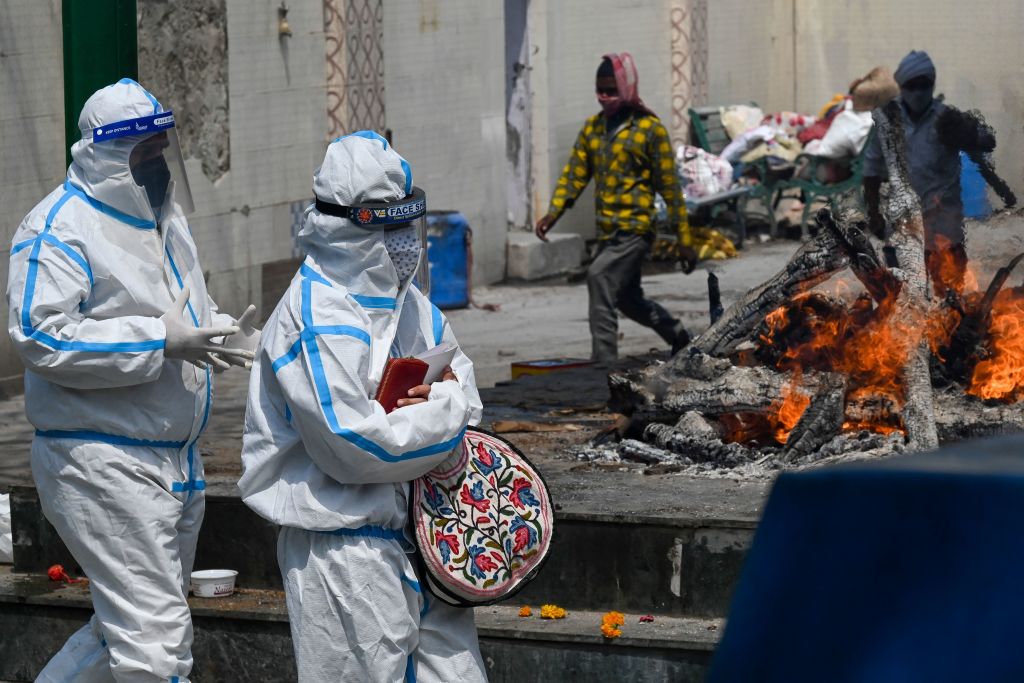 Relatives wearing Personal Protective Equipment (PPE) arrive for the funeral of their relative who died due to Covid 19 coronavirus, at a crematorium in New Delhi on May 11, 2021 (Photo: PRAKASH SINGH/AFP via Getty Images).

THE picture of India struggling to cope with Covid-19 is about as bleak as could be imagined.

This is useful and timely – especially when contrasted with the Australian government’s clumsy decision not only to stop evacuation flights, but also to criminalise any of its citizens in India who might step back onto Aussie soil before Saturday (15).

Cold­shouldering India in this way is myopic. Certainly, India’s crisis is severe, but it will abate eventually. There are three reasons why the West’s relationship with India will endure, and there are traps the West could easily fall into by failing to be on the front foot when it comes to crisis cooperation.

The first is trade – the scale of India’s economic footprint is too large to ignore. Granted, the pandemic will dent Indian GDP by 10 per cent that will be lost forever, but a similar thing is also true of the UK.

Last week the UK government proudly announced an interim trade deal with India – so far, so good. Astonishingly, it was valued at just £1 billion, a tiny figure by any accounts. (It stands at £23bn annually, which is not significant at all by Indian standards). Britain hopes to double that within a decade.

The rub for the UK is that India wants looser immigration and visa rights. Including its people in a deal speaks loudly of India’s centuries’ old tradition of exporting its people. This is an awkward truth that the UK struggles with, in contrast to the US and Canada where, over many decades, the welcome mat has been lavishly displayed.

Stand back and India’s economic scale becomes clear. Most astute forecasts point to an annual trend of a growth rate of six to eight per cent for the next two decades. Unsurprisingly, every country in the world is trying to get a slice of what will be a very big pie. However, notes Peter Varghese (former most senior mandarin in Australian foreign affairs), substantial reforms are needed in India’s financial, university, planning and regulation sectors – all of which will be huge undertakings for the Modi administration.

Second, India lies in the middle of an enormous geo­strategic security agenda. The administration of US president Joe Biden has made it clear that the whole Indo­ Pacific region remains central to its interests. In February, the US’s little known Global Force Posture Review was launched. This will clarify (and the detail will be critical) how far the US global presence can be delivered militarily, should tensions deteriorate with China.

Strategic competition between the US and China is now a reality. The close involvement of Pakistan, Sri Lanka and many others in China’s Belt and Road Initiative is being questioned. In Australia (from where I write), new tensions are being felt – the government has torn up agreements that individual states have made with Beijing to attract investment.

India is also a member of the Quad (with the US, Australia and Japan). This serves to bind together on security matters four mature democracies in a part of the world where there are few such political systems.

Indian leaders want to play a shrewd role in balancing global superpowers. Remember, India has a long tradition of being wary of military alliances. It will not be bullied, even by bigger powers. India understands that others want to constrain China. Some are in favour of pushing back against Beijing – Azeem Ibrahim (at the US Army War College) has proposed that the UK invites Taiwan to next month’s G7 summit. India does not wish to be in the vanguard of such pressure, but it will naturally use the re­emergence of US influence in the Indian Ocean rim to extend its ties and influence in eastern and southern Africa, the Gulf and south­east Asia.

India’s diaspora is the third (and most important) ingredient in assessing the future. This is because its people, perhaps more than anything else from the country itself, are scattered across the world in sizeable numbers. They form a club of many tens of millions, with large concentrations in the rich and emerging economies of all continents.

In recent years, people of Indian heritage in Western countries have arrived at the top of politics, business, the arts and non­profits. Today, a reasonable conversation can begin by asking ‘who will be Britain’s first brown prime minister?’ For sure, there is a lot of indirect discrimination and bias about, so those who have broken through have had to be twice as smart.

This creates opportunities for western countries to appeal to India. But a diaspora is a two­ sided sword. For instance, those who don’t go along with prime minister Narendra Modi’s approach can be ignored or hounded. In addition, non-­Hindu minorities are unlikely to be moved by the kind of Hindu nationalism that India is increasingly projecting.

Nevertheless, people themselves will continue to identify in some way with the country they once came from. This creates ties, associations, ways of being together and feeling secure, and subtle tendencies to want to see India succeed. These are hidden assets – not just for Indians, but also for western countries such as the UK. The trick will be in thinking of diasporas in the right way.

Fifty years ago, the UK’s global ‘kith and kin’ might have been said to have been the old white dominions. If the Covid­19 crisis had happened in 1970, Britons would have been assisted if they were caught out on a trip back to Australia, New Zealand or Canada. Now, younger Brits are more skewed to Asian, African and Caribbean backgrounds. The UK’s pandemic evacuation flights home for its citizens should be offered to both, or neither.

The global pandemic has brought the relationship with India into sharper view. Once there was a vague mumble about how India and the UK held common ties and that these implicitly mattered.

Now, as India is feeling the pandemic heat, it is important to see through the fog to the long ­term – in which global trade, security and people ties will matter. And the bigger such ties, it will matter the most to the UK’s place in the world.

Shamit Saggar is a professor of political science and director, University of Western Australia Public Policy Institute; and a visiting professor at King’s College, London.