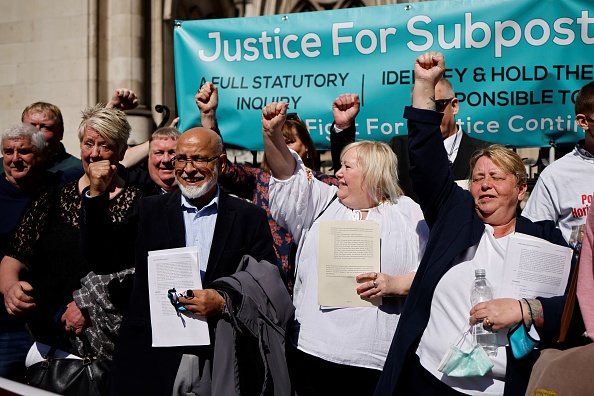 Former subpostmasters celebrate outside the Royal Courts of Justice in London, on April 23, 2021, following a court ruling clearing subpostmasters of convictions for theft and false accounting. (Photo by Tolga Akmen / AFP) (Photo by TOLGA AKMEN/AFP via Getty Images)

POST OFFICE workers, who have had their convictions for theft, fraud and false accounting quashed recently, will each get an interim compensation payment of up to £100,000, ministers said on Thursday (22).

In a written statement to the Commons, the business secretary, Kwasi Kwarteng, said the government was supporting the Post Office to provide the cash before final compensation settlements were agreed, reports said.

Postal affairs minister, Paul Scully, said: “The suffering and distress these postmasters and their families have gone through cannot be overstated. While nothing will make up for the years of pain they faced after this appalling injustice, I hope this initial step provides a measure of comfort.”

The announcement of compensation came three days after the court of appeal quashed the conviction of 12 more post office workers, who had been convicted because of the defective Horizon IT system that falsely suggested there were cash shortfalls.

With the judgement on Monday (19), total 57 former post office workers are now cleared of convictions. As and when more convictions will be quashed, those people reportedly will also be eligible for the compensation payments, the Department for Business, Energy and Industrial Strategy said.

The Post Office is reportedly contacting the post office operators and will aim to make an offer for an interim payment within 28 days of receiving an application from those whose overturned convictions relied on evidence from the Horizon system, supplied by Fujitsu.

It is believed that about 900 operators may have been prosecuted and convicted between 2000 and 2014, in what is deemed as one of the biggest miscarriages of justice in British legal history. While many were convicted and went to jail, many paid the compensation, some went bankrupt and lost livelihood while a few died before their names could be cleared of the false charges.

Welcoming the government announcement, Post Office chief executive Nick Read said “ensuring compensation is made as quickly as possible is a priority for Post Office”.

“Whilst we cannot change the past, this is an important step towards meaningful compensation for victims and we will offer payments as soon as possible,” Read said.