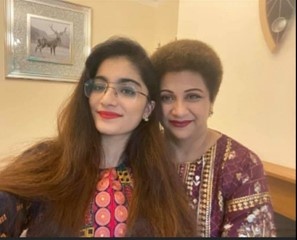 DETECTIVES probing the murders of an NHS doctor and her daughter in Reedley have arrested two men on suspicion of counts of murder, rape and arson with intent to endanger life.

The suspects, aged 51 and 56, were detained in Burnley on Sunday (4) after the Lancashire Police launched an investigation into the deaths of Dr Saman Mir Sacharvi, 49, and Vian Mangrio, 14, a student at Marsden Heights School in Nelson, on Thursday.

Though awaiting verification, officers believed the girl was Dr Sacharvi’s daughter, as the two lived together at an address on Colne Road, Reedley.

According to the post-mortem report on Saturday, Dr Sacharvi died “as a result of pressure to the neck”, and had “suffered an assault”.

A police spokesman said the cause of Mangrio’s death was yet be ascertained, but confirmed that she was “found badly burnt inside the address”.

The Lancashire and South Cumbria NHS Foundation Trust said: “Our thoughts are with Dr Sacharvi’s family and friends at this terribly sad time.

“She was a well-loved and well-liked colleague here at the Trust….”

In a tribute, perinatal lead consultant Gill Strachan said Dr Sacharvi “was approachable, diligent and had formed good working relationships with the team”.

“She was empathic and well-liked by the women and families that she worked with,” she added.

“Her colleagues described her as very kind, brilliant and a joy to work with.

“During lockdown when Covid-19 restrictions were in place, she went out of her way to support the care of women, personally delivering prescriptions to women isolating at home.

“The team are shocked and saddened, and she will be greatly missed.

“Our thoughts are with family and friends at this very sad time.”

Headteacher of Marsden Heights Community College, Alyson Littlewood, said: “We are shocked and heartbroken by the tragic deaths of Vian and her mother and our whole school is mourning the loss of two much-loved members of our community.

“Vian was an outstanding student. She had that wonderful mix of academic ability coupled with an enthusiasm for everything else that school can offer.

“She was very popular and was involved in a whole range of school activities. She was extremely supportive of her friends, was generous to all and had a smile that could fill a room.

“We were all very fortunate to have her in our lives and we will miss her on a daily basis.”

Det Supt Jon Holmes, head of major crime, said the Lancashire Police was “on with a number of lines of enquiry”, and “a team of detectives dedicated to the investigation… will leave no stone unturned”.

“Our thoughts remain with Dr Sacharvi and Miss Mangrio’s family and friends at this awful time and we send them our deepest condolences,” he added.

The officer also urged people with any information pertaining to the case to contact the force.

“Perhaps you have been in the Colne Road area recently and have seen something suspicious,” he said. “Maybe you have CCTV or dashcam footage which could contain something useful. Or perhaps you think you know who is responsible.

“We would urge you to get in touch, even if you think what you know is insignificant.”

People can contact the police through the dedicated Major Incident Portal or on 101, quoting log 0429 of October 3. Alternatively, independent charity Crimestoppers can be reached anonymously on 0800 555 111 or at crimestoppers-uk.org.