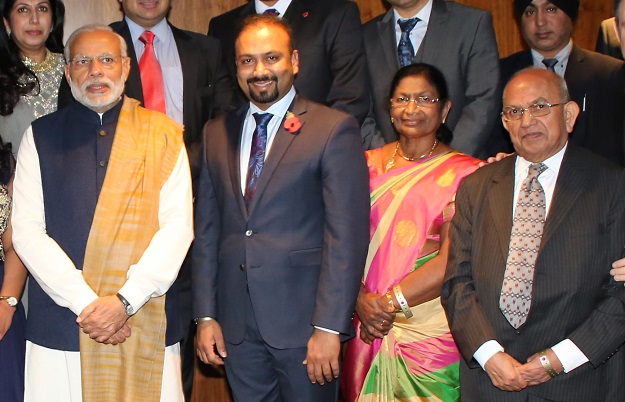 INDIA’S prime minister Narendra Modi has expressed his deep, personal sadness as he paid tribute to Asian Media Group (AMG) founder and editor-in-chief Ramniklal Solan­ki CBE, who passed away after a short illness on March 1.

In a letter to Kalpesh Solanki, Mr Solanki’s elder son and AMG group managing editor, the prime minister said, “Gujarati diaspora journalism will always remember him for his fearless and courageous journalism.”

Modi added: “He served the world of Guja­rati literature, culture and society with great distinction and also kept the community informed with news from around the globe.

“He was an inherently humble, mild mannered and noble person.”

Mr Solanki had interviewed Modi several times when the latter was the chief minister of the state, in both Gandhinagar, the state capi­tal, and London.

They last met when the Indian prime min­ister visited London in November 2015. Modi addressed a huge gathering of the Indian diaspora at Wembley Stadium after which Mr Solanki met him backstage.

Mr Solanki, who lived in London, was in Ahmedabad to spend the winter when he fell ill and passed away earlier this month.

He founded AMG, which is Britain’s largest Asian publishing house, and publishes the Garavi Gujarat newsweekly, Eastern Eye, Asian Trader and Pharmacy Business, among other titles.

Garavi Gujarat, which is published in the UK and the US, marked 50 years since its launch in April 2018.

Several prominent people have also paid tribute to Mr Solanki, describing him as a “gi­ant of Gujarati journalism”.

‘Help us stop hidden crimes against women and girls’