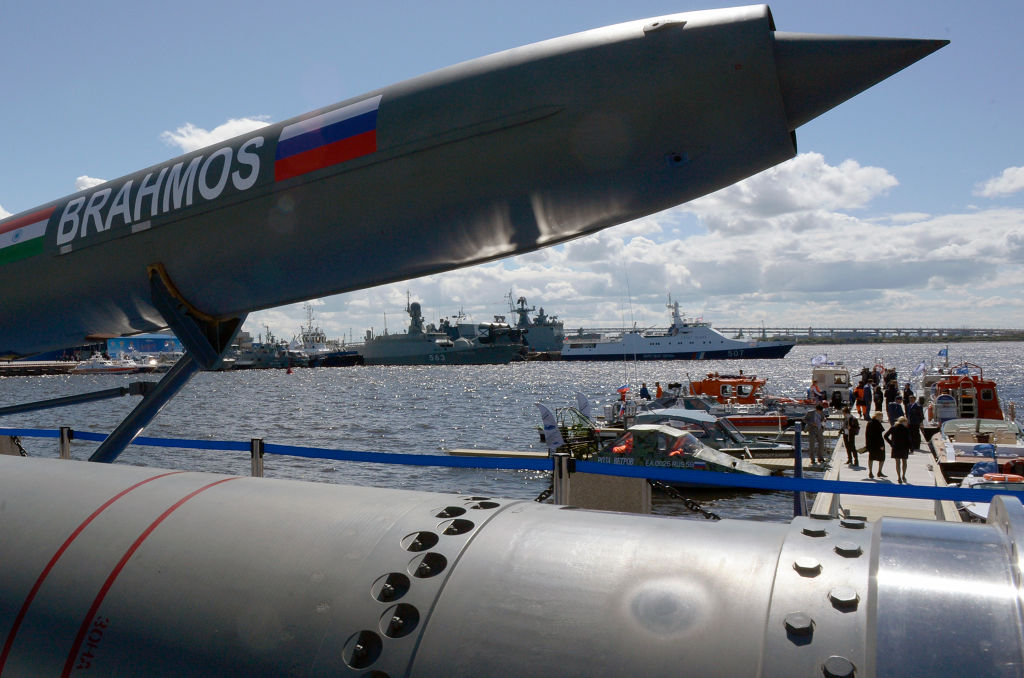 A Brahmos supersonic cruise missile is on display at the International Maritime Defence Show in Saint Petersburg on June 28, 2017. (Photo by OLGA MALTSEVA/AFP via Getty Images)

INDIA is among the select few countries which are developing hypersonic weapons, a US Congressional report has said.

The revelation follows a media report which claimed that China recently tested a nuclear-capable hypersonic missile that circled the globe before missing its target.

The independent Congressional Research Service (CRS), in its latest report this week, said that although the US, Russia and China possess the most advanced hypersonic weapons programmes, other countries, including Australia, India, France, Germany and Japan, are also developing hypersonic weapons technology.

While Australia has collaborated with the US, India has joined hands with Russia on this, the CRS said in its report.

India has collaborated with Russia on the development of BrahMos II, a Mach 7 hypersonic cruise missile, the CRS report said.

“Although BrahMos II was initially intended to be fielded in 2017, news reports indicate that the programme faces significant delays and is now scheduled to achieve initial operational capability between 2025 and 2028.

“Reportedly, India is also developing an indigenous, dual-capable hypersonic cruise missile as part of its Hypersonic Technology Demonstrator Vehicle programme and successfully tested a Mach 6 scramjet in June 2019 and September 2020,” the CRS said.

India operates approximately 12 hypersonic wind tunnels and is capable of testing speeds of up to Mach 13, said the Congressional report which is prepared by independent subject area experts for members of the US Congress.

The Financial Times this week reported that China has tested hypersonic missiles. However, China denied it, saying it tested a hypersonic “vehicle” and not a nuclear-capable hypersonic “missile” as reported by the leading British newspaper which also said that the missile missed its target by about two-dozen miles.

The report said that China tested the nuclear-capable hypersonic missile in August that circled the globe before speeding towards its target, demonstrating an advanced space capability that caught US intelligence by surprise.

According to the CRS, since 2007, the US has collaborated with Australia on the Hypersonic International Flight Research Experimentation (HIFiRE) programme to develop hypersonic technologies.

SCIFiRE demonstration tests are expected by the mid-2020s.

In addition to the Woomera Test Range facilities, one of the largest weapons test facilities in the world, Australia reportedly operates seven hypersonic wind tunnels and is capable of testing speeds of up to Mach 30, the report said.

Like India, France has also collaborated and contracted with Russia on the development of hypersonic technology. And Japan is developing the Hypersonic Cruise Missile (HCM) and the Hyper Velocity Gliding Projectile (HVGP), it said.

The CRS said that in recent years, the US has focused such efforts on developing hypersonic glide vehicles, which are launched from a rocket before gliding to a target, and hypersonic cruise missiles, which are powered by high-speed, air-breathing engines during flight.

The Department of Defence (DOD) is currently developing hypersonic weapons under the Navy’s Conventional Prompt Strike programme, which is intended to provide the US military with the ability to strike hardened or time-sensitive targets with conventional warheads, as well as through several Air Force, Army and DARPA programmes, the CRS said.

According to the CRS, unlike programmes in China and Russia, US hypersonic weapons are to be conventionally armed.

“As a result, US hypersonic weapons will likely require greater accuracy and will be more technically challenging to develop than nuclear-armed Chinese and Russian systems,” it added.