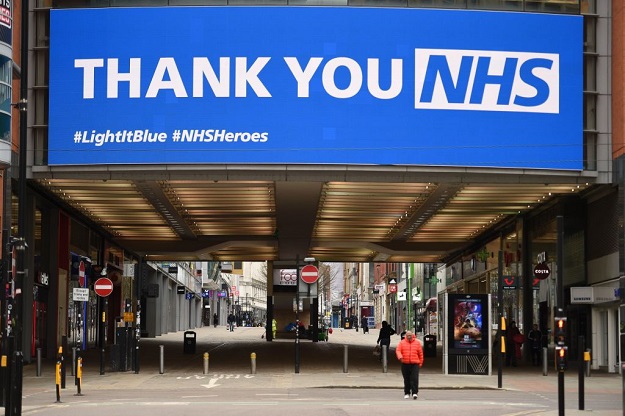 There could be up to 14 million people on NHS waiting lists by next autumn.

I AM a child of the National Health Service. Like so many millions of us, I took my first breath in an NHS hospital – in my case, the Doncaster Royal Infirmary, on a bright April day in 1974.

Marking the birthday of the NHS reminds us how often it has been there for us at times of the greatest joy, anxiety or sadness for our families, from cradle to grave, during many of the most meaningful mo­ments in our lives.

Had it not been for the NHS, I would never have come to exist at all. It was the NHS that bought both of my parents to this country – my father after he had completed his medical training in Gujarat, In­dia; and my mother, from County Cork in Ireland, who took a ferry to England to train as a nurse, be­fore they met in a Surrey hospital in the early 1970s.

So the NHS tells the story of Britain today in so many ways. It is among our most valued symbols of national pride. It was forged in the peace settlement that honoured the service and public sacrifices of the Second World War. The celebration of the NHS in the 2012 London Olympic opening ceremony underlined its status – alongside our sporting teams, our traditions of Remembrance, and the monarchy – as among the great civic symbols that can unite our society. These anxious months of the Covid pandemic, in which the youngest royal princes and princesses have joined millions clapping on our doorsteps, may just have entrenched the status of the NHS as perhaps Britain’s most cherished na­tional institution of them all.

Because the NHS was born just a fortnight after the Empire Windrush docked in Tilbury, it has al­ways had an umbilical link and a symbiotic rela­tionship with the rise of a multi-ethnic Britain across those seven decades. Even health minister Enoch Powell sought nurses from the Caribbean before his infamous second thoughts in the Rivers of Blood speech. However stormy the arguments about immigration became, nurses and doctors who came here to work for the NHS were consist­ently seen as paradigm examples of why immigra­tion can be good for Britain.

More than a symbol of immigration, the NHS is the best example we have of what integration truly means at its best. Those of every ethnicity and faith, and so many nationalities, come together to con­tribute to something that we all benefit from – in a spirit of public service, meeting the needs of our common humanity, not based on our ability to pay.

There is no better model of why social connec­tion matters in our liberal, diverse society. So it is appropriate that, in 2020, the birthday of the NHS is being marked as a bigger national moment too. It coincides with what we all hope may be a turning point in this year of the pandemic. As we move anxiously beyond lockdown, we know how much depends on what we all do for each other to reduce the chances of a second wave of the virus.

It will be a weekend of mixed emotions, with some eager to be among the first to visit a pub again and others rather more wary. Thousands of fami­lies will be remembering those lost to Covid, while the NHS mourns many of its own too. The ethnic disparities of Covid have seen many Asian doctors and a large number of foreign nurses, many from the Philipinnes, lose their lives. On Saturday (4), many public buildings will be lit in NHS blue as an act of commemoration, with the public invited to put a light in their windows too.

The NHS birthday is a day to say #ThankYouTo­gether, with everybody invited to acknowledge those who have helped us through these months. The #ClapForOurCarers applause will return, this time on Sunday (5), at 5pm. On Sunday, we do not clap just for the NHS and key workers, but for everyone who is helping us get through this – shop workers and delivery drivers, refuse collectors, volunteers and good neighbours. The NHS is keen to recipro­cate, and to applaud everybody who supported their efforts to protect us too.

The lesson of the pandemic, across these months of social distancing, has been to remind us of how much social connection matters. So the new #to­gether coalition organising events on Sunday is asking people to stay out and chat with neighbours after the applause has faded.

Many challenges lie ahead beyond Covid – across society and in the NHS itself too. At this time of rising pressure to act on racial inequality, the NHS should be among those institutions best placed to show what leadership means, by ensuring staff have a voice in catalysing the changes that can see the di­versity of the NHS workforce reach the top table.

The commitment to make the 2020s a decade of reconnection is more timely than ever. Now, 72 years on from its birth, it seems natural to look once again to the NHS to help forge a renewed vision of what we can be at our best.