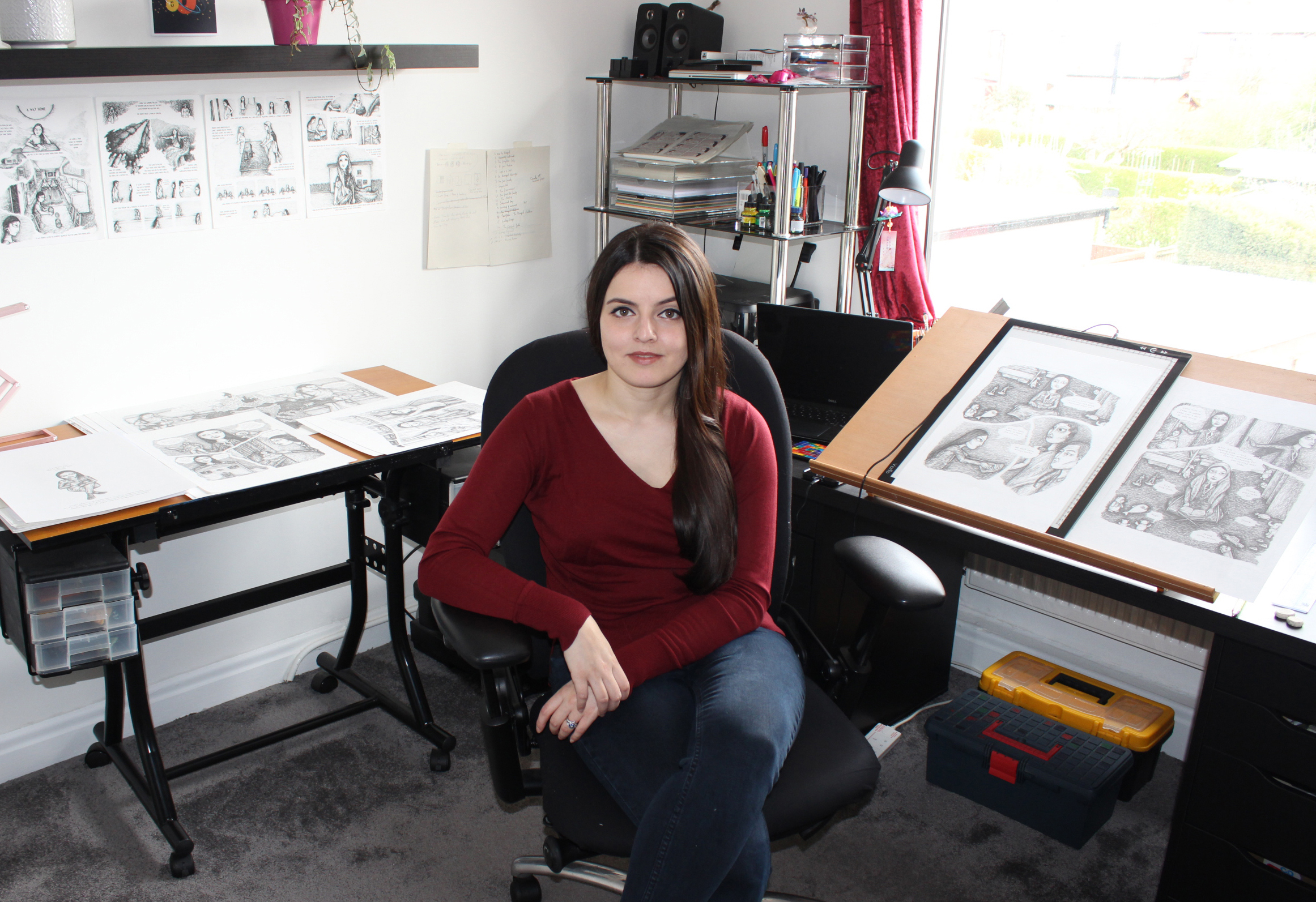 Sayra in her studio

A BRITISH MUSLIM has revealed the inspiration behind her autobiographical debut graphic novel, which explores her multi-cultural upbringing.

Sayra Begum’s Mongrel explores a number of issues, including immigration and racism, from the perspective of the Muslim protagonist, Shuna. The story also centres on mixed heritage relationships and intergenerational experiences.

Of mixed heritage herself, Begum’s mother is from Bangladesh and her father is white British. Her father was a convert to the religion, meaning she didn’t have a typical experience of the faith growing up. Begum said she was sometimes treated as second class because of her background. She deliberately chose ‘Mongrel’ as a derogatory term to describe herself, a detail revealed in the novel early on.

“I have been told I’m not a proper Muslim because I’m white,” the 28 year-old told Eastern Eye. “That was the thinking behind (the title), looking back on my experiences.”

When she considered her background, Begum realised her story was fairly atypical of British Muslims. She wrote Mongrel with a desire to show a female Muslim growing up in a multicultural environment. “I haven’t written it because I want it to become representative of everyone because I know that my experiences aren’t typical and the choices I’ve made are probably seen more on the outside of the culture than on the inside,” she said. “It’s just providing something that isn’t repeating the same sort of personality that we are sometimes exposed to – the idea of a submissive Muslim female.”

Growing up in Dorset, Begum did not enjoy reading. When she did read, it was typically to learn Bengali or read the Qur’an. When she did begin to pick up books for her own enjoyment, Begum leaned towards narratives of women sharing their stories and experiences.

When Begum discovered graphic novels, a new world was unveiled to her. “(My interest) just moved onto another level, when I saw how someone actually depicted their world,” the illustrator said.

Asked how her family had reacted to the release of Mongrel, Begum admitted she was unsure if her parents realised it was autobiographical.

“I kept it guarded for the longest time, I didn’t want anybody influencing the story. If I worried about what anybody would think of the book I would loose my truth that I was trying to capture. My dad wanted to be an artist when he was younger but didn’t have the same opportunities I did, so ever since I can remember he has been encouraging me to pursue the arts.”

Her brothers, on the other hand, are extremely proud and excited by the prospect of the narrative. “My brothers are very supportive and they got quite emotional when they read it,” Begum said.

To help finance the novel, Begum was awarded a grant by Art Council England last year. It meant she was able to work on Mongrel full time, allowing her to work freely without any financial pressure. Prior to the grant, Begum worked part time at the Tate Art Gallery in Cornwall. More recently, she was employed at a Nottingham library. She spent the rest of her time writing and illustrating the novel.

At the time of speaking to Begum last month, she had not seen the final printed version of the novel. Describing herself as “nervous yet excited”, she said she was looking forward to the release. As the idea for the novel had initially begun in 2014 while studying for her master’s degree, Begum admitted it had been a “long journey”.

“I’m really looking forward to getting it out there even though it might be a bit of a strange time with the Covid-19 crisis still going on,” she said. “I just want to get (Mongrel) released into the world.”
Mongrel by Sayra Begum is out now.