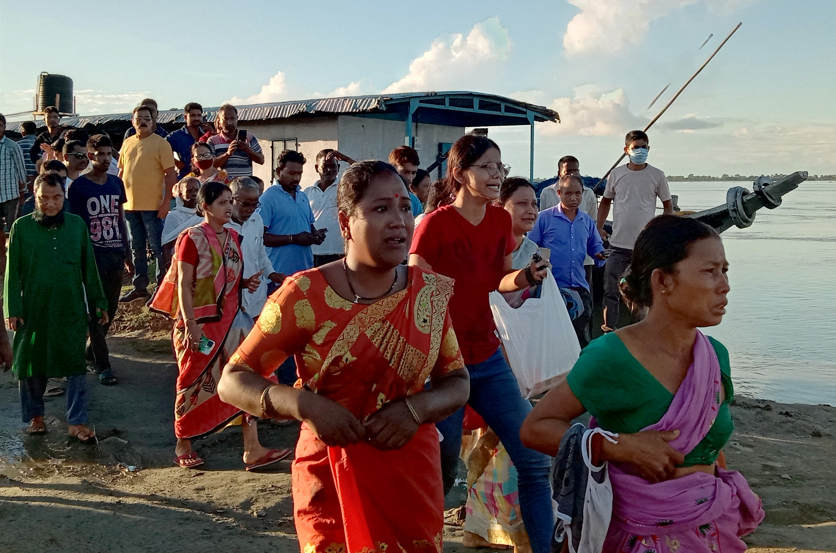 People react as they get off a vessel after a boat carrying dozens of passengers sank in following a collision with another vessel near Nimati Ghat in the northeastern state of Assam, India, September 8, 2021. REUTERS/Stringer

ONE woman is dead and dozens more are feared missing after two ferries, each carrying up to 90 people, collided on the Brahmaputra river in northeastern India on Wednesday (8), causing one vessel to capsize, officials said.

A wooden passenger boat departing from Nimati Ghat in Assam state’s Jorhat district flipped over shortly after the collision with an incoming ferry, authorities said.

“Preliminary investigation has found that there were some 80-90 people on board” the wooden boat that capsized, Jorhat police superintendent Ankur Jain said, adding that divers were scouring the river for survivors.

“The two boats possibly collided due to some communication error.”

Officials said late on Wednesday that 45 people had been rescued but one of them, a 28-year-old teacher, died later.

There were no details immediately available about how many people were injured.

No one on the other ferry was injured, officials added.

Prime minister Narendra Modi tweeted that he was “saddened by the boat accident”, adding that “all possible efforts are being made to rescue the passengers”.

Water levels for the Brahmaputra have been elevated in recent weeks due to the annual monsoon deluge.