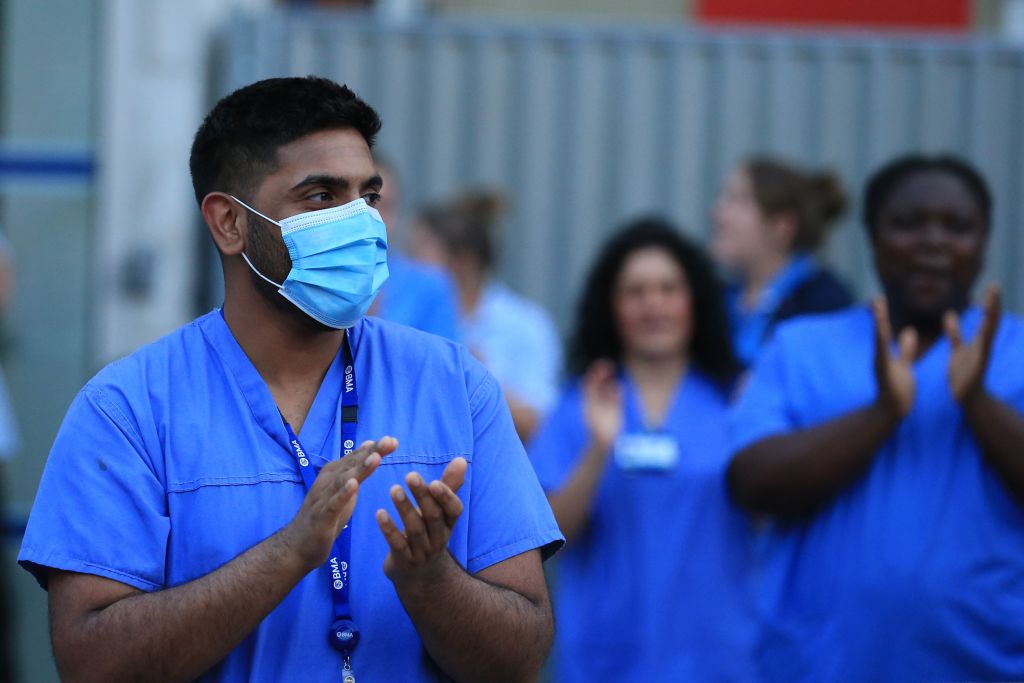 NHS staff members take part in a national “clap for carers” to show thanks for the work of Britain’s National Health Service (NHS) workers and frontline medical staff around the country as they battle with the novel coronavirus pandemic, at Leeds General hospital in Leeds on May 7, 2020. (Photo by LINDSEY PARNABY/AFP via Getty Images)

THE NHS depends on black and minority ethnic staff (BAME) to provide high quality, reliable and safe care to patients – and has done so since its inception in 1948.

They enrich the NHS with their skills, enthusiasm and diverse perspectives, and their continuing contribution has been highlighted by the pandemic and the disproportionate effect that Covid-19 is having on healthcare workers from ethnic minorities.

Reports suggest that the majority of healthcare workers who have died from Covid-19 have been from ethnic minorities, even though they make up about a third of doctors working in the NHS.

On the NHS’s 73rd birthday [next Monday, 5], it’s important to celebrate the contribution of BAME staff, but also to recognise the racism and discrimination they continue to face.

From its inception, the NHS was built with the help of foreign workers and professionals from across the world. Thousands of doctors and nurses emigrated from the Indian subcontinent, Africa and the Caribbean islands, recruited by a British health service afflicted by an acute post-war shortage of medical staff. Once here, many have had to live in deprivation and work in jobs that do not match their skills.

Medics from a BAME background constitute 30 per cent of all those registered with the General Medical Council (GMC), but there is clear evidence they are not treated fairly in awards, career progression and admission to medical schools. They are also over-represented in patient complaints.

The NHS has a poor record on health outcomes for BAME people too. Studies have shown poor satisfaction rates, higher infant mortality rates, inequitable access to hospital services, higher psychiatric detention rates for the black community, higher incidence of diabetes and hypertension – the list is vast. BAME people are more likely to live in areas of high deprivation, in overcrowded houses, and the unemployment rate is far higher than that for white people.

Today, in 2021, racial discrimination remains rife, even if it has taken a different form in creating impossible working conditions for many.

The latest Workforce Race Equality Standard report from NHS England shows an increasing trend of bullying, harassment or abuse from staff, colleagues, patients, relatives or the public, whereas reports fell in number for their white counterparts.

It found BAME doctors and nurses were twice as likely to face disciplinary action. And BAME staff have less faith in their trust giving them equal career progression and promotion opportunities, while discrimination from managers and team leaders had also risen.

Racism starts in medical schools and continues throughout doctors’ careers. A recent BMJ investigation found medical schools and universities turn a blind eye to racial harassment and abuse of minority ethnic students. There have been claims of differential attainment of GP postgraduate trainees by BAPIO (British Association of Physicians of Indian Origin).

BAME doctors feel discriminated against by their regulator, the GMC, because of disproportionate disciplinary actions.

Primary and secondary care across many parts of the UK would have to shut down if a regular supply of foreign doctors was not available.

[Baroness] Dido Harding, who wants to be CEO of the NHS, has proposed, rather foolishly perhaps, that she wants to end the NHS’s reliance on foreign doctors and nurses. She evidently does not understand the situation facing the service (with a shortage of 100,000 health workers) and all those who work in it.

Her recent display of xenophobia isn’t just insulting to the migrant workers who have held up the NHS since its inception and, at the peak of this pandemic, heroically risked their lives to make up for the government’s incompetence, it also undermines the very values that the NHS stands for.

The track record of the NHS on racism is poor. And although the service itself is not racist, its structural and institutional racism have blighted the lives of many BAME people. So far in the NHS, tackling racism has been mere tokenism. We don’t need reviews or more reports.

Empty rhetoric makes no difference. A cultural change in the long run, and mandatory targets and penalties in the short term, are essential. As we celebrate the 73rd anniversary of the NHS, we need to pledge that all arms of the service, and other medical bodies, take a hard look in the mirror and reflect on how transparency, fairness, and equality should frame its future.

It’s time to call time on racism in the NHS, and that would be its best birthday present.