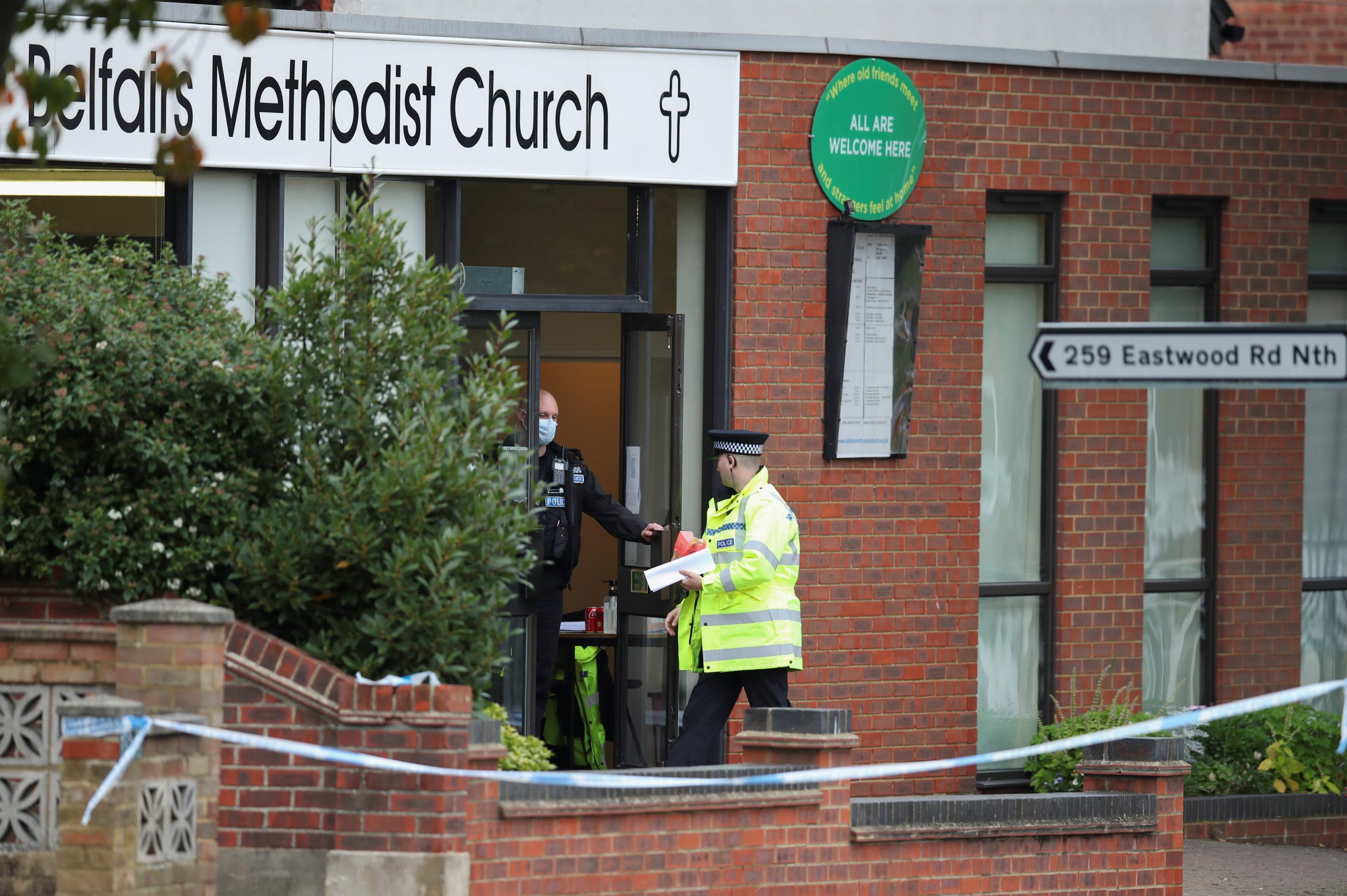 Police officers at the scene where British MP David Amess was stabbed to death. (REUTERS/Chris Radburn)
Follow Us

THE attacker who fatally stabbed British lawmaker David Amess was referred to an official counter-terrorist scheme for those thought to be at risk of radicalisation, according to media reports.

Police said late Saturday (16) that detectives had until Friday, October 22, to question the suspect after he was detained under the Terrorism Act, which allowed them to extend his detention.

Veteran Conservative MP David Amess, 69, was talking with voters at a church in the small town of Leigh-on-Sea east of London when he was stabbed to death on Friday.

Police have said they are investigating “a potential motivation linked to Islamist extremism”. The investigation is being led by Scotland Yard’s Counter Terrorism Command.

The BBC said it had received confirmation from Whitehall officials that the man’s name is Ali Harbi Ali.

Ali, a British citizen of Somali heritage, had been referred to Prevent, the UK’s scheme for those thought at risk of radicalisation a few years ago, the BBC reported.

Ali is believed not have spent long on the programme, which is voluntary, and was never formally a “subject of interest” to MI5, the domestic security agency, said the BBC.

Police and security services believe the attacker acted alone and was “self-radicalised”, The Sunday Times reported, while he may have been inspired by Al-Shabaab, Al-Qaeda-linked Islamists in Somalia.

Ali’s father Harbi Ali Kullane, a former adviser to the prime minister of Somalia, confirmed to The Sunday Times that his son was in custody, adding: “I’m feeling very traumatised”.

Police said they have been carrying out searches at three addresses in the London area in a “fast-paced investigation”.

The Sun tabloid reported that the attacker stabbed Amess multiple times in the presence of two women staff, before sitting down and waiting for police to arrive.

The Daily Mail newspaper reported that he had booked an appointment a week ahead.

On Saturday evening, hundreds of mourners attended a candle-lit vigil at a sports field near the scene of the crime, holding a minute’s silence in the MP’s memory.

Prime minister Boris Johnson earlier visited the crime scene to pay his respects on Saturday, laying floral wreaths outside the church with the leader of the opposition, Labour leader Keir Starmer in a rare show of unity.

Residents, including members of the Muslim community, also heaped bouquets next to the police tape.

Britain’s politicians were stunned by the highly public attack, which recalled the murder of a pro-EU lawmaker ahead of the Brexit referendum.

In June 2016, Labour MP Jo Cox was killed by a far-right extremist, prompting demands for action against what lawmakers said was “a rising tide” of public abuse and threats against elected representatives.

Home secretary Priti Patel on Friday (15) ordered police to review security arrangements for all 650 MPs and The Sunday Times reported that every MP could be granted security protection when meeting the public.

“We will carry on… We live in an open society, a democracy. We cannot be cowed by any individual,” Patel told journalists after laying a wreath for her fellow Essex MP.

Tobias Ellwood, a Conservative MP who tried to save a stabbed police officer during a 2017 terror attack near the Houses of Parliament, on Twitter urged a temporary pause in surgeries, or face-to-face meetings with constituents, until the security review is complete.

House of Commons Speaker Lindsay Hoyle in The Observer wrote that “we need to take stock” and review whether security measures introduced after Cox’s murder are “adequate to safeguard members, staff and constituents, especially during surgeries”.

MPs and their staff have been attacked before, although it is rare.

But their safety was thrown into sharp focus by Brexit, which stoked deep political divisions and has led to outburts of angry, partisan rhetoric.

A specialist police unit set up to investigate threats against MPs in the aftermath of Cox’s murder said 678 crimes against lawmakers were reported between 2016 and 2020.

Amess, a Brexit backer, had written about public harassment and online abuse in his book “Ayes & Ears: A Survivor’s Guide to Westminster”, published last year.

“These increasing attacks have rather spoilt the great British tradition of the people openly meeting their elected politicians,” he said.

MPs have had to install security cameras and only meet constituents by appointment, he added.

Unlike some MPs, Amess publicised meeting times for constituents on Twitter and held them in public places, while asking people to book ahead.