Arch-rivals India and Pakistan are in the same group for the Asia Cup 2023. 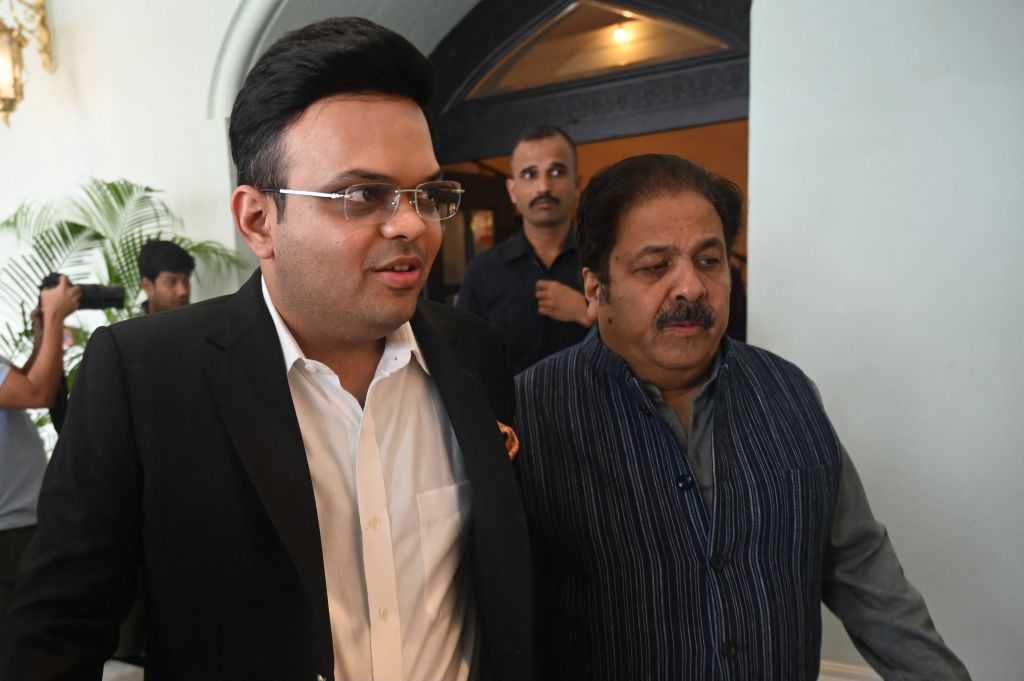 Board of Control for Cricket in India (BCCI) secretary Jay Shah (L) and vice president Rajiv Shukla (R) arrive for the BCCI 91st annual general meeting in Mumbai on October 18, 2022. (Photo by INDRANIL MUKHERJEE/AFP via Getty Images)
Follow Us

PCB chairman’s comment came a day after Jay Shah announced the council’s cricket calendar for 2023 and 2024 and a pathway structure for qualification to the Men’s and Women’s Asia Cup.

“Presenting the @ACCMedia1 pathway structure & cricket calendars for 2023 & 2024! This signals our unparalleled efforts & passion to take this game to new heights. With cricketers across countries gearing up for spectacular performances, it promises to be a good time for cricket,” Jay Shah said in a tweet.

Arch-rivals India and Pakistan are in the same group for the Asia Cup 2023.

Sethi replied to Shah with a sarcastic tweet on Thursday (5) and said, “Thank you Jay Shah for unilaterally presenting ACC structure & calendars 2023-24 especially relating to Asia Cup 2023 for which Pakistan is the event host. While you are at it, you might as well present structure and calendar of our PSL 2023! A swift response will be appreciated.”

Asian Cricket Council issued an official statement, “The Asian Cricket Council (ACC) on Thursday announced the ACC Calendar 2023-24 and the pathway structure. It has come to our knowledge that PCB Chairman Najam Sethi has made a comment on the ACC President unilaterally taking the decision on finalising the calendar and announcing the same.

The ACC wants to clarify that it has followed established due process. The calendar was approved by its Development Committee and Finance and Marketing Committee in a meeting held on December 13, 2022.”

“The calendar was then communicated to all the participating members individually, including Pakistan Cricket Board (PCB), via an email dated December 22, 2022. While responses were received from certain Member Boards, no comments or suggested modifications were received from PCB. In view of the above, Sethi’s comments on a social media platform are baseless and are vehemently denied by the ACC,” it further read.

As per the new calendar, 2023 will start off with Men’s Challengers Cup, a ten-team fifty-over tournament. This tournament will feature 10 teams, out of which eight are Bahrain, Saudi Arabia, Bhutan, China, Myanmar, Maldives, Thailand and Iran. Two teams are yet to be named. There will be two groups of five teams each. A total of 23 matches will be played.