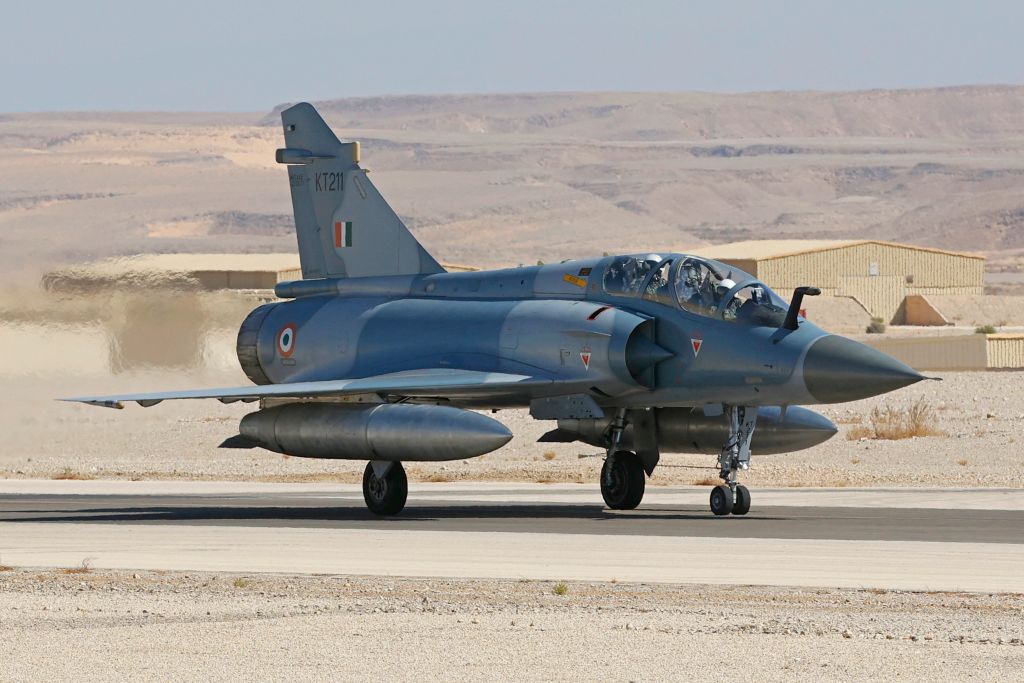 Arms dealer Sanjay Bhandar has filed a case against French defence major Thales Group demanding he be paid his full “consultancy fee” for his role as an intermediary in winning the company contract to modernise the Mirage 2000 fleet of fighter jets for the Indian Air Force. (Photo by JACK GUEZ/AFP via Getty Images)

AN arms dealer wanted in India on money laundering and tax evasion charges is pursuing a separate legal battle of his own in France over an alleged unpaid cut from a large Indian defence contract dating back more than 10 years, according to a report.

Sanjay Bhandari, 59, has filed a case against French defence major Thales Group demanding he be paid his full “consultancy fee” of €20 million for his role as an intermediary in winning the company an estimated €2.4 billion contract to modernise the Mirage 2000 fleet of fighter jets for the Indian Air Force (IAF), The Daily Telegraph said.

Thales denied any such agreement or contract with the Indian businessman, who described himself as a “well-known commercial intermediary involved in arms and defence in India” in court papers filed at the Tribunal de Commerce in Nanterre, near Paris, seen by the newspaper.

Bhandari is currently on conditional bail in Britain ahead of an extradition hearing expected to begin in London on February 21. He is also said to have applied for political asylum claiming persecution by the Bharatiya Janata Party (BJP)-led government due to his links to the opposition Congress Party.

The case comes at a time when Thales, as part of a French consortium, are negotiating with the Indian government to sell more Rafale military jets, with a deal for the supply of 36 Rafale-B and Rafale-C jets for the Indian Air Force nearing completion.

According to the report, Bhandari alleged that from 2008 he helped Thales sell the upgrade of the Mirage jets by facilitating a meeting with an Indian defence ministry official.

He claimed to have helped the company clinch the deal to modernise the Mirage 2000 fleet of fighter jets that India had bought from France in 1982, but claimed he was paid only €9 million of the €20 million agreed.

In court papers, Bhandari claimed he had “a longstanding commercial relationship” with Thales since 1996 and helped set up a key meeting in Paris following which in July 2011 Thales and Dassault won the Indian government contract.

In his petition, Bhandari claimed he was told by a Thales India official about an elaborate financial covert scheme in India and Dubai which enabled the payment of secret commissions to intermediaries. This arrangement was presented as being a standard practice within the Thales group for the payment of commercial intermediation services, taking into account the regulations in force in France, the claim reads.

The petition also alleges that in order to pay the commissions to Bhandari, Thales awarded offset contracts to two companies based in Bangalore.

“The companies would retain about 25 per cent of the price paid by Thales for services that could materialise in engineering or consulting,” the newspaper said.

A spokesperson for Thales confirmed that Bhandari had filed a petition against Thales SA in a commercial court in June last year for the settlement of sums “allegedly due to him on an aeronautical modernisation project”.

“Thales firmly denies the claims by Mr Sanjay Bhandari regarding the sums allegedly due or any other payments to him by Thales SA,” a spokesperson for Thales said.

“Thales has never signed a contract with Mr Bhandari or his companies in connection with this project. Thales complies with the law and applies a zero tolerance policy on corruption and influence peddling. The Group’s integrity programme is regularly evaluated and amended to reflect changes in applicable legislation and best practices,” the spokesperson said.

Bhandari is being sought by India’s Central Bureau of Investigation (CBI) and the Enforcement Directorate (ED) for prosecution over money laundering, contrary to the Prevention of Money Laundering Act 2002, with two extradition requests related to money laundering and the second to tax evasion.

The Indian government’s extradition request for Bhandari had been certified by Home Secretary Priti Patel on June 16 and he was arrested a month later in London on July 15, 2020. He appeared at initial hearings in the case at Westminster Magistrates’ Court in London last year, with a full extradition hearing scheduled between February 21 and March 9.