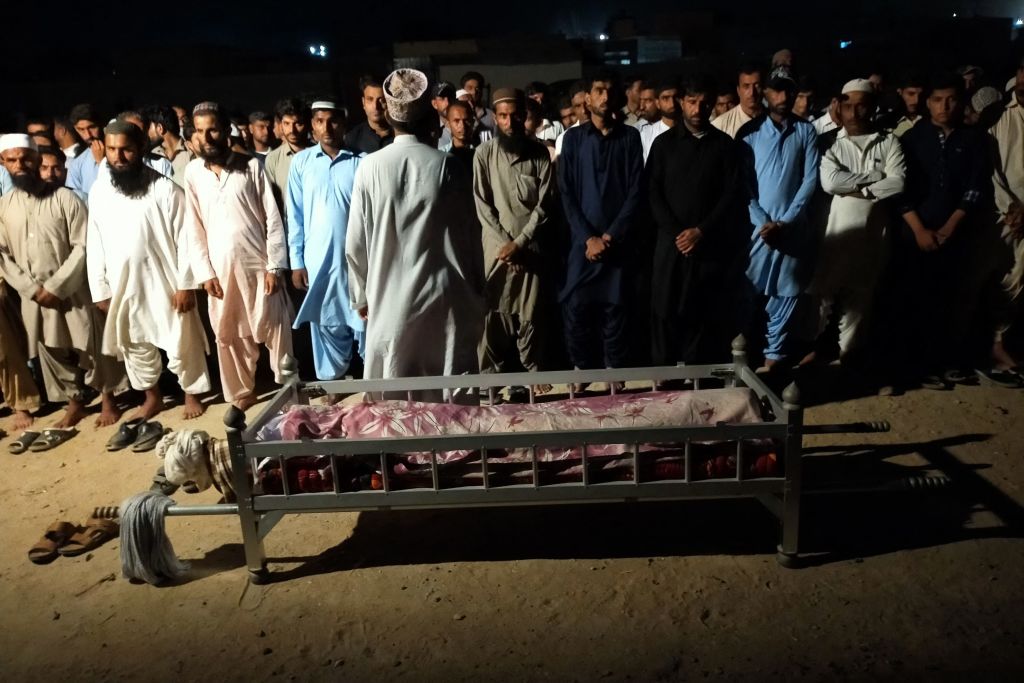 Residents perform a funeral prayer for a victim of a suicide attack in the port city of Gwadar on August 20, 2021. (Photo by AFP via Getty Images)

CHINA has asked Pakistan to overhaul the security mechanism to forestall attacks on its nationals working on various infrastructure projects after a suicide bomber attacked a convoy of Chinese nationals in the Balochistan province.

Two children were killed while a Chinese national and several others were injured in the suicide attack on the convoy of four vehicles in Gwadar on Friday (20). It was the second attack in over a month targeting Chinese nationals.

The Chinese embassy in Islamabad said in a statement that Pakistan should properly treat the wounded, conduct a thorough investigation on the attack, and severely punish the perpetrators.

“At the same time, relevant departments at all levels in Pakistan must take practical and effective measures to implement strengthened whole-process security measures and upgraded security cooperation mechanisms to ensure that similar incidents will not happen again,” it said.

The embassy said the security situation in Pakistan has been serious and there have been several terrorist attacks in succession, resulting in the casualties of several Chinese citizens.

It asked its Chinese citizens in Pakistan to be vigilant, strengthen safety precautions and reduce “unnecessary outings”.

The Pakistani authorities in a statement said the bomber targeted the convoy of Chinese nationals comprising four Chinese vehicles with integral security details of the Pakistan Army and police contingent on the East Bay Expressway near Fishermen Colony in Gwadar.

“A young boy ran out of the colony once the convoy reached there to target Chinese vehicles. Fortunately, soldiers of the Pakistan Army in plainclothes rushed to intercept the boy who immediately exploded himself about 15-20 metres away from the convoy,” according to the statement.

“We reaffirm to our Chinese brothers our wholehearted endeavours to deal with these threats comprehensively,” it said.

Gwadar is the culmination point of the $60 billion (£44b) China-Pakistan Economic Corridor (CPEC).

A large number of Chinese experts and workers are employed in Gwadar and the surrounding areas to complete various projects under the CPEC.

China is involved in several projects aimed at the development of the Gwadar port on the Arabian Sea which is part of China’s Belt and Road infrastructure project.

In the last few months, there has been an increase in terror attacks targeting Chinese nationals in Balochistan and Karachi.

At least 13 people, including nine Chinese nationals, were killed in a terrorist attack in Khyber Pakhtunkhwa last month.

Chinese nationals also came under attack in Karachi last month when gunmen shot at them from a moving vehicle.

For Pakistan, ties with China are crucial due to its increasing economic dependence on Beijing.

This year, the two nations are celebrating the 70th anniversary of the establishment of diplomatic relations.