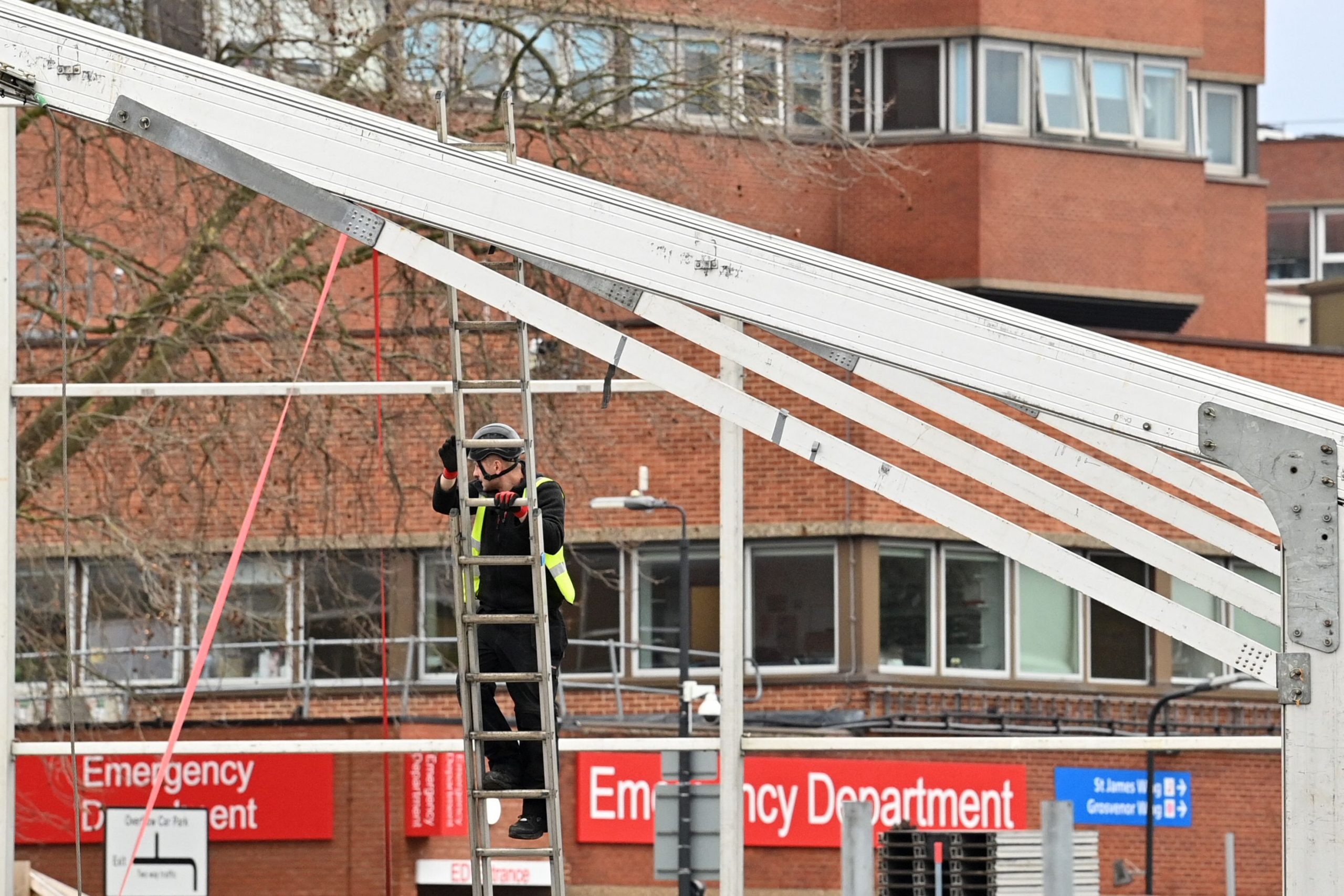 England is building temporary hospitals to deal with a potential overspill of inpatients as surging virus cases put the country’s health service on a “war footing”, officials said Thursday.

Fuelled by the highly contagious Omicron variant, daily cases have ballooned, standing at more than 183,000 on Wednesday.

NHS England said it would build the structures known as “surge hubs” in the grounds of eight hospitals in cities including London, Bristol and Leeds from this week, with each designed to house around 100 extra patients.

Outside St George’s Hospital in Tooting in south London, workers were already putting up a metal framework to support the roof of a new unit, AFP journalists saw.

“Given the high level of Covid-19 infections and increasing hospital admissions, the NHS is now on a war footing,” National Medical Director Stephen Powis said.

He added that he hoped “we never to have to use these new hubs”.

The extra beds are designed for patients who are recovering from illnesses, including those who no longer have Covid, to free up space and staff in the adjacent hospitals to treat large numbers of virus cases.

The number of patients in hospital with the virus are also growing fast, exceeding 10,000 in England on Wednesday — the highest figure since March.

The UK has been one of Europe’s worst hit countries with a death toll of 148,089.

The government opened large “Nightingale” field hospitals in venues such as exhibition centres during the first wave of the virus. The facilities named after nursing pioneer Florence Nightingale were not widely used and staffing was a problem due to their vast size.

This time, the plan is to make available as many as 4,000 “super-surge beds”, in some cases using existing hospital facilities such as gyms or education centres.

Health secretary Sajid Javid said: “We hope the Nightingale surge hubs at hospitals will not have to be used but it is absolutely right that we prepare for all scenarios and increase capacity”.

Medics warned of rising staff shortages due to people off sick with the virus or self-isolating.

Pat Cullen, general secretary of the Royal College of Nursing professional body and union, told Sky News: “At this point in time we have no idea how we’re going to be staffing those additional hubs as they are set up,” she said.

Chris Hopson, head of NHS Providers, which represents some healthcare sectors, warned that in some areas, staff absence rates due to Covid mean there are “significant numbers of ambulances off the road”.

England is the exception among UK nations in not imposing extra virus curbs for the festive period, while Wales, Scotland and Northern Ireland have imposed limits on how many people can socialise together and closed nightclubs.

British Prime Minister Boris Johnson has said that the high booster takeup rate in England plus evidence that Omicron is milder have allowed the country to avoid more restrictions.

He has urged people to get tested before attending New Year’s events and be “sensible”.

The numbers of people testing positive or in self-isolation is hitting sectors including transport.

The Southern rail company announced Thursday it will not run trains from London’s Victoria station, one of the UK’s busiest, until January 10 due to “coronavirus isolation and sickness”.