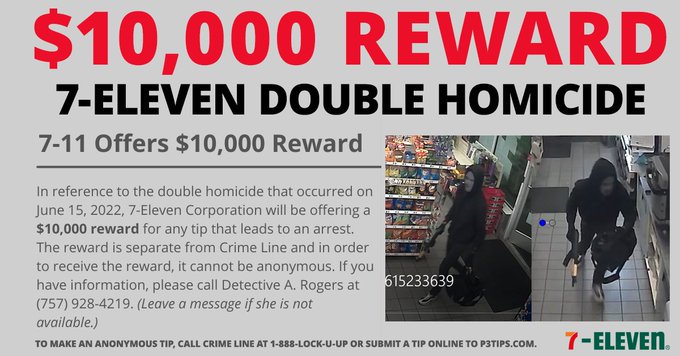 US retail store 7-Eleven has offered $10,000 (£8,154) for information on double homicide inside Newport News store, according to a report.

The Dallas-based firm offers the reward for any information on a fatal double shooting that happened inside one of the chain’s Newport News stores on June 15.

“In reference to the double homicide on June 15, 2022, 7-Eleven Corporation will be offering a $10,000 reward for any tip that leads to an arrest. The reward is separate from Crime Line and in order to receive the reward, it cannot be anonymous. If you have information, call Detective A. Rogers at (757) 928-4219,” 7-Eleven said in a statement regarding the investigation on social media.

According to Newport News Police Department (NNPD), Police began the investigation after crews received a call at 11:46 pm about suspicious activity. When officers arrived, they found two men dead inside the business.

Police revealed that both victims died before they could be taken to the hospital.

During a press conference, NNPD chief Steve Drew said the incident was a suspected robbery. According to them, a customer walked in and called the police when they noticed no one was working.