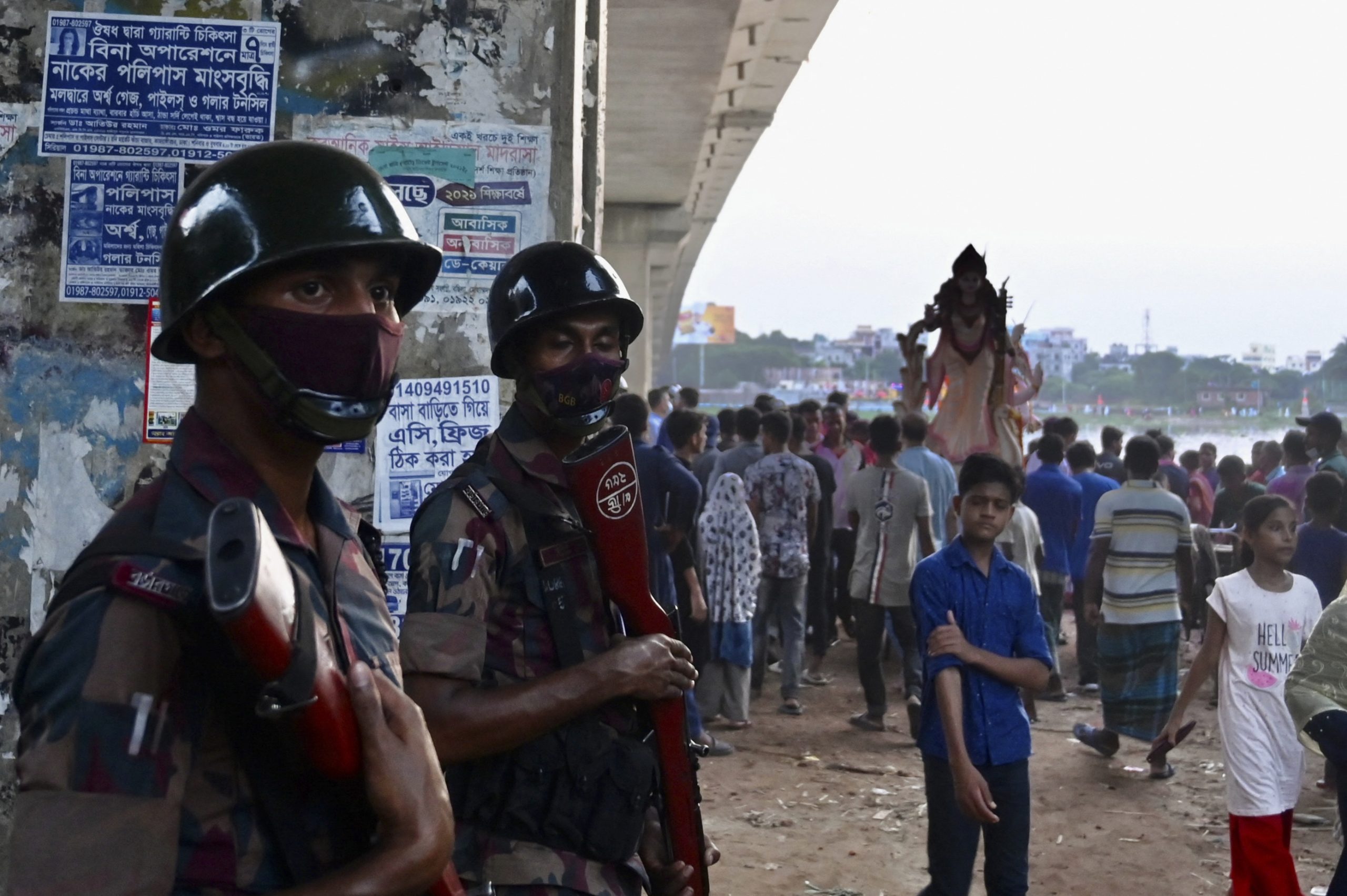 Border Guard Bangladesh personnel stand guard as Hindu devotees prepare to immerse a clay idol of the Hindu Goddess Durga in the Buriganga River on the final day of the Durga Puja festival in Dhaka on October 15, 2021. (Photo by Munir Uz zaman / AFP)

Police fired tear gas and rubber bullets at thousands of protesters in Bangladesh’s two main cities on Friday, in a third day of religious disturbances in the Muslim-majority nation, authorities said.

The protests began on Wednesday after footage emerged of a Koran being placed on the knee of a god during celebrations for the Hindu festival of Durga Puja. Hindus make up 10 percent of the population.

At least four people were killed late Wednesday when police opened fire on a crowd of around 500 people attacking a Hindu temple in Hajiganj, one of several towns hit by the disturbances.

Two Hindus were also killed and some 150 others were injured across the country, community leader Gobinda Chandra Pramanik told AFP, with at least 80 makeshift temples attacked. Authorities did not confirm the toll.

On Friday up to 2,500 Muslim worshippers gathered outside Baitul Mukarram Masjid, Bangladesh’s largest mosque in central Dhaka, demanding “exemplary punishment” for the “desecration” of the Islamic holy book.

“They brought out a procession and then hurled sandals and bricks at our officers. We fired tear shells and rubber bullets to disperse them,” Sazzadur Rahman, Dhaka’s deputy police commissioner, told AFP.

He said at least five officers were injured and three protesters were held.

An AFP photographer at the scene said more than 5,000 people joined the protests.

High-speed mobile phone internet services were shut down across the country in an apparent bid to prevent spread of violence.

And amid concern over the “disturbing” violence from Hindu-majority neighbour India, Bangladesh Prime Minister Sheikh Hasina met leaders of the community on Thursday and promised stern action.

“So far around 90 people have been arrested. We will also hunt down all the masterminds,” Home Minister Asaduzzaman Khan said.

The Hindu minority, who number around 17 million, have faced sporadic violence in recent years, often sparked by rumours spread on social media.