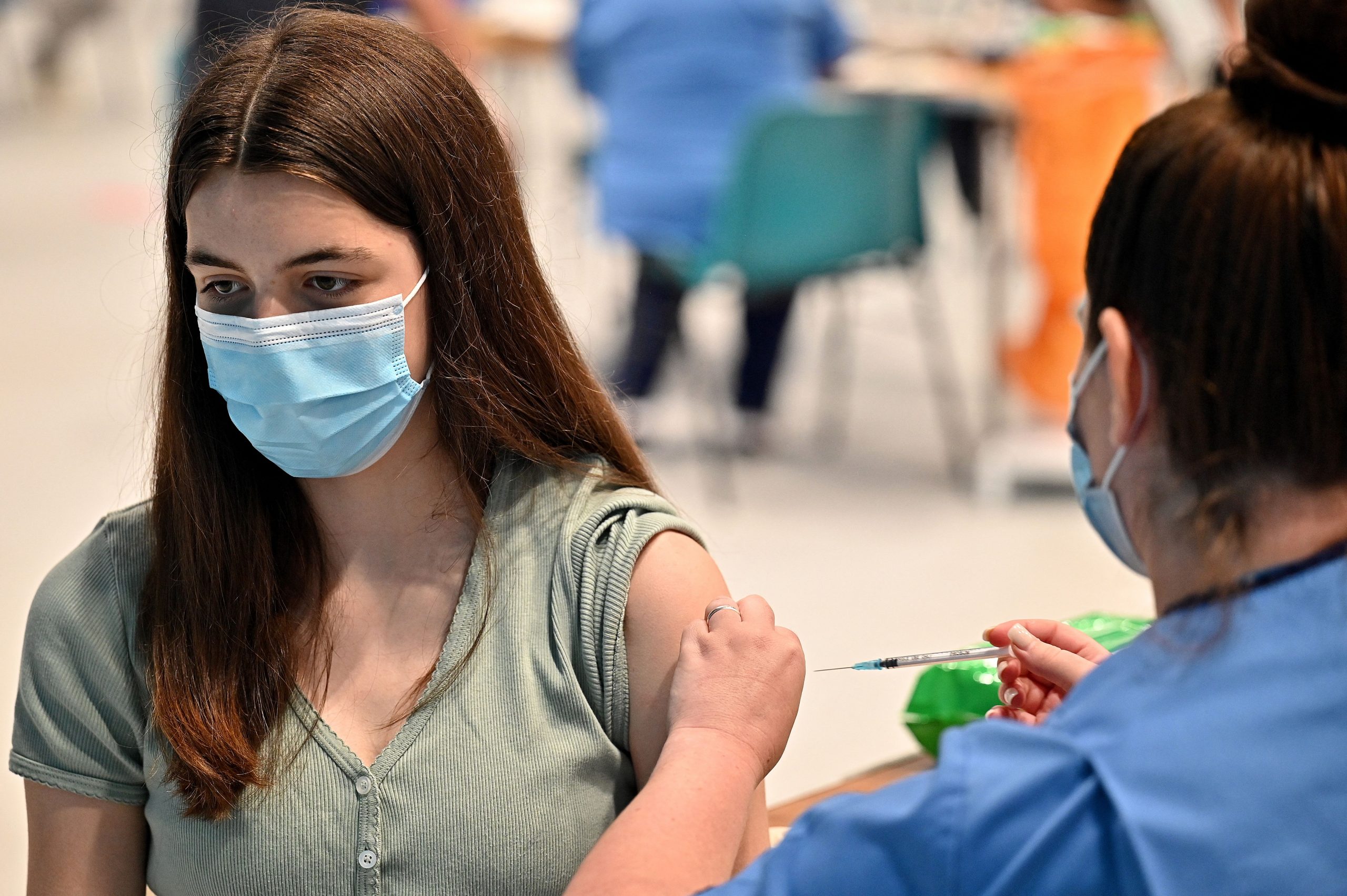 A teenager receives a covid-19 vaccine at a vaccination centre in Barrhead, south of Glasgow. (Photo by JEFF J MITCHELL/POOL/AFP via Getty Images)

SAJID JAVID and Nadhim Zawahi have urged reluctant teenagers to ignore fake news and go and get the Covid-19 jab.

Javid, the health secretary and Zawahi, the education secretary are writing to the parents and saying the vaccines are safe, seeking to boost uptake among the teenagers.

All parents of the secondary pupils in England will receive a letter urging them to come forward for a vaccine and also continue with the regular testing.

According to a report in The Times, officials believe that vaccination of under-16s have been slowed down to seek consent from parents and it takes time from schools to get it organised.

Reports suggest, in Scotlant under-16s can book appointments for jabs at the same centres as adults, where 39 per cent of 12-15 year-old have taken the shot.

The vaccination drive which began three weeks ago was also hit by big Covid outbreak as NHS chiefs look to set dates for vaccinations in every school in England by the end of the month.

The joint letter is designed to reassure parents about the safety and benefit of vaccination, which both Javid and Zawahi say is “one of the best things young people can do to protect themselves and those around them”.

They also add that children have been “hugely affected by the pandemic” and have urged that testing and vaccination are the best way to keep them in school through the winter.

The Joint Committee on Vaccination and Immunisation (JCVI) have declined to recommend Covid-19 vaccination for younger teenagers, saying Covid is so mild for most children that benefits of the jab would be small for a mass programme. Also, some on the committee are concerned athat the very rare cases of heart inflammation caused from the vaccine, although usually mild, may cause permanent damage.

However, Chris Whitty, the chief medical officer for England gave the go-ahead saying mass vaccination would reduce disruption to education.

The joint letter insists on the benefit of the the jab for children’s welfare and mental health and says heart problems are “extremely rare” after a first dose. It acknowledges the JCVI’s reluctance to vaccinate children but puts focus on Whitty and other experts account have been taken into account that extra health benefits from avoiding children missing education and concluded that there were public health grounds to recommend vaccinating 12 to 15 year-olds”.

The letter adds the children who already had Covid should also get the jab because it is not yet known till when the natutal immunity lasts.

The letter also warns that some parents will have seen “fake stories on social media about the vaccine”, which have included a forged NHS letter wrongly claiming jabs will kill one in 3,000 children.

The letter tells parents: “You may have come across false or misleading information about the virus or the vaccine. It is important that you get your information from trusted sources.”

Geoff Barton, general secretary of the Association of School and College Leaders, said: “School leaders are increasingly frustrated about delays to the rollout of coronavirus vaccinations. There appear to be logistical issues around the capacity of health teams to deliver vaccinations at the speed and scale required.”

The NAHT teaching union’s general secretary, Paul Whiteman, said: “The big issue schools are having at the moment is the number of children and staff off sick due to Covid and other illnesses. The government removed bubbles and other isolation protocols to keep more children in school, but, as we predicted, this seems to be leading to a high number of pupils missing school as a result of becoming ill.”