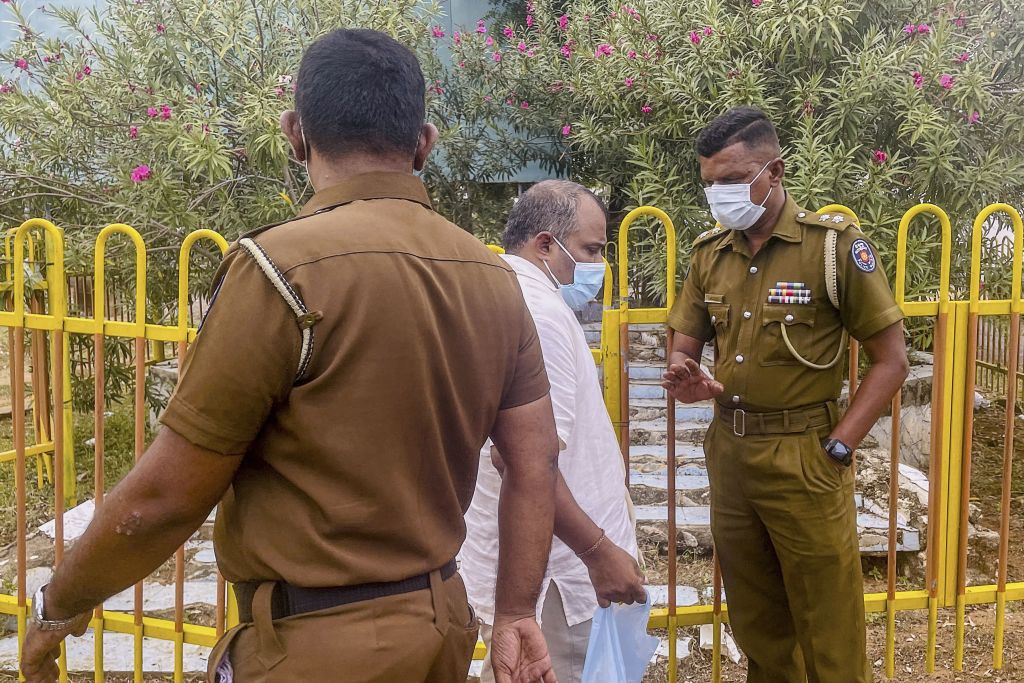 Police officers escort into a vehicle Tamil legislator Selvarajah Kajendran (C) after accusing him of commemorating a Tiger separatist rebel, at Nallur in Jaffna on September 23, 2021. (Photo by AFP via Getty Images)

SRI Lankan police on Thursday (23) arrested a Tamil parliamentarian for commemorating a separatist rebel who died campaigning for the minority community, hours after president Gotabaya Rajapaksa called for reconciliation between ethnic groups.

Opposition legislator Selvarajah Kajendran was bundled into a police vehicle in the northern Jaffna peninsula, the heartland of the Tamils, despite protests from onlookers at a memorial for Tiger rebel Thileepan.

Video footage shared on social media showed Kajendran, 46, resisting arrest and eventually being forced into the car along with two of his aides at Nallur, 360 kilometres (225 miles) north of Colombo.

Nallur police confirmed that the Tamil National People’s Front MP had been detained at the memorial event, which was held near a temple where Thileepan died in 1987 after staging a hunger strike.

There was no immediate comment from his party, but Sri Lanka’s main Tamil party, the Tamil National Alliance (TNA), condemned the police’s actions.

“I condemn the arrest of Selvarajah Kajendran, MP in (Nallur) Jaffna today while exercising his right to #memorialisation,” TNA spokesman Abraham Sumanthiran said on Twitter.

The detention came hours after Rajapaksa vowed at the UN General Assembly in New York to address the root causes that led to a three-decade Tamil separatist war that ended in 2009.

Rajapaksa was the top defence official at the time and played a key role in crushing the Tamil Tigers, who at the height of their power controlled one-third of the island.

Commemorating the rebels is banned by the government, despite the UN Human Rights Council repeatedly urging Colombo to allow Tamils to mourn their war dead.

Sri Lanka has also resisted international calls to investigate allegations that government troops killed at least 40,000 Tamil civilians in the final months of the war.

However, on Wednesday (22), Rajapaksa told the UN assembly that he wanted to work towards ethnic reconciliation.

“It is my government’s firm intention to build a prosperous, stable and secure future for all Sri Lankans, regardless of ethnicity, religion, or gender.”

In talks with UN Secretary General Antonio Guterres the previous day, Rajapaksa said he was inviting Tamils abroad to join talks to ensure ethnic peace in the country.