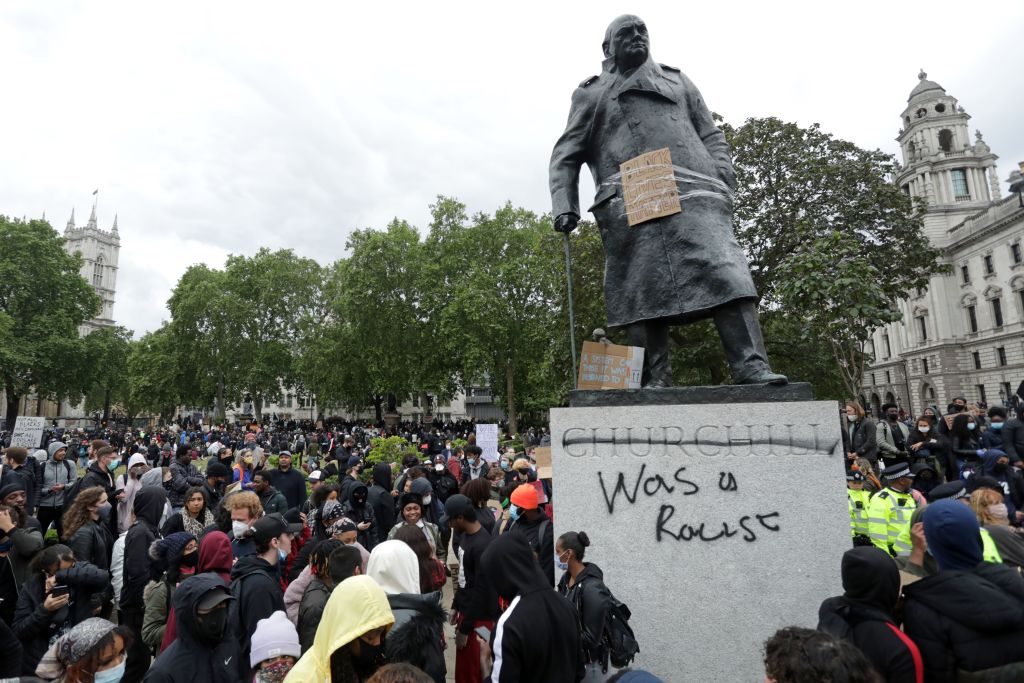 The statue of former British prime minister Winston Churchill is seen defaced, with the words "was a racist" written under his name on it's base in Parliament Square. (Photo: ISABEL INFANTES/AFP via Getty Images).

ANTI-RACISM protests in Britain have been “subverted by thuggery”, Prime Minister Boris Johnson said on Sunday (8), warning those responsible would be held to account.

Tens of thousands took to the streets of London on Sunday, rallying for a second day running to condemn police brutality after the killing of George Floyd in Minneapolis. As numbers dwindled, some protesters tussled with police.

It came after 14 police officers were injured on Saturday, two seriously, when protesters clashed with mounted police near Johnson’s Downing Street residence.

“People have a right to protest peacefully and while observing social distancing but they have no right to attack the police,” Johnson said on Twitter.

“These demonstrations have been subverted by thuggery — and they are a betrayal of the cause they purport to serve. Those responsible will be held to account.”

“That speaks to the acts of public disorder that actually have become a distraction from the cause people are actually protesting about,” she told the BBC.

“It’s right that police follow up on that and make sure that justice is taken with those individuals responsible for such disorderly and lawless behaviour.”

The comments, however, created a stir.

“He was a major slave trader involved in the transportation of 84,000 enslaved African men, women & young children, of whom 19,000 died on voyages from West Africa to the Caribbean & the Americas.”

“I grew up in Bristol,” the former chancellor tweeted. “I detest how Edward Colston profited from the slave trade. But, THIS IS NOT OK. If Bristolians wants to remove a monument it should be done democratically – not by criminal damage.”

I grew up in Bristol. I detest how Edward Colston profited from the slave trade.

But, THIS IS NOT OK.

If Bristolians wants to remove a monument it should be done democratically – not by criminal damage. https://t.co/Wfz47zQQZU

Labour MP Clive Lewis argued on Twitter in favour of pulling down the statue: “If statues of confederates who fought a war for slavery and white supremacy should come down then why not this one? Someone responsible for immeasurable blood and suffering. We’ll never solve structural racism till we get to grips with our history in all its complexity. #BLM”

Earlier in the day, shadow foreign secretary Lisa Nandy said: “We cannot be silent in the face of racism and discrimination. These protests must be the moment for recognition and positive change.”

We cannot be silent in the face of racism and discrimination. These protests must be the moment for recognition and positive change. pic.twitter.com/v3g5YUzHVx

Meanwhile, Winston Churchill’s statue at Parliament Square was again vandalised on Sunday. A day ago, some protesters had used neon green spray paint to deface the monument even as UK marked the 76th anniversary of the D-Day.

This time a bunch of protesters desecrated it with a graffiti reading “was a racist” under his name, leading to a heated online debate.

While many people reminded protesters of the former prime ministers leadership during the “darkest hour”, others pointed out his racist stance, especially towards Indians.

Calling Churchill a hero, Tory mayoral candidate Sahun Bailey said: “Without him, we’d be without the freedoms that these protesters are exercising today.”

Many social media users posted Churchill’s infamous outburst during India’s freedom struggle: “I hate Indians. They are a beastly people with a beastly religion.”

A lot of people also held Churchill responsible for the Bengal famine of 1943.

3 million people died in the Bengal famine as a direct result of Winston Churchill’s crimes. Do they teach that in colonial history in UK schools?

Sadiq Khan, meanwhile, came under fire, with critics accusing him of “allowing anarchistic rioters” to “destroy” the city.

“Where is Mayor Sadiq Khan while our war memorials in London are being desecrated & vandalised, and police are being attacked?” asked one on Twitter.

The London mayor backed “peaceful” protests, but said he was “badly let down by a tiny minority who turned violent”.

“This is simply not acceptable, will not be tolerated and will not win the lasting and necessary change we desperately need to see,” he tweeted.

He also urged protesters to “remember that Covid-19 is still a very real threat”.