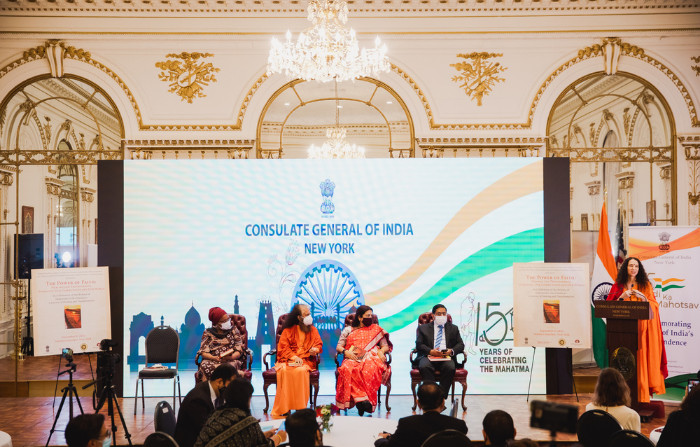 THE consulate general of India in New York, the US, recently organised an event to honour ‘Hollywood to the Himalayas: A Journey of Healing and Transformation’, the memoir of Sadhvi Bhagawati Saraswati, secretary-general of Global Interfaith WASH Alliance, Parmarth Niketan Ashram located in Rishikesh in the northern Indian state of Uttarakhand.

In her book, the US-born Sarasawati has written about the unexpected way her life had transformed 25 years ago when she travelled to India with a backpack and experienced spirituality on the banks of River Ganga.

A number of dignitaries were present on the occasion, including India’s minister of state for external affairs and culture Meenakshi Lekhi, United Nations special adviser on the prevention of genocide to secretary-general Alice Nderitu, consul general of India to New York Randhir Jaiswal, president of Parmarth Niketan Swami Chidanand Saraswati and secretary-general, Religions for People, professor Azza Karam, who moderated the event.

After the event was inaugurated with the ceremonial lighting of the lamp and recitation of auspicious prayers, Saraswati presented each of the dignitaries on the dais a copy of her memoir.

As the UN Security Council convened, the consulate general of India highlighted the security that comes from people’s faith.

“In a special confluence of faith, culture and leadership, leaders from the United Nations, from Government and from interfaith came together to celebrate the power of faith to heal and transform ourselves, our communities and our world,” a press release said.

‘Faith can divide or unite, choice is ours’

“We used the power of faith to keep our rivers and river banks clean. It’s so fitting that the East and the West come together here today in celebration of Sadhviji’s new book Hollywood to the Himalayas. For 25 years she has been a bridge of the East and the West, of science and spirituality and now of the United Nations and United Creations!”

Nderitu said, “Sadhvi Bhagawati represents those religious leaders and actors who are taking a strong stand on the protection and promotion of human rights and on the prevention of atrocity crimes at international and local levels. She chose to help, support, and protect the most discriminated and marginalised.

Sadhvi Bhagawati embodies the quintessence of the local peacebuilders. As United Nations Special Adviser on the Prevention of Genocide, I will continue to partner with Sadhvi Bhagawati and other women religious actors to advance the prevention of atrocity crimes globally. Only with their contribution, we can strive towards a world free from atrocity crimes. Therefore, dear Sadhvi, please count on my full support, and that of my office.”

Dressed in a saffron sari and wearing a red bindi, Saraswati said in her speech how the power of faith had transformed her life. “Having grown up in Hollywood with all the opportunity and all the privilege, what I didn’t have was faith or a connection to God. Through the powerful, totally unexpected experience of Oneness with the divine that I had on the banks of the Ganga river, I realized that I am part of the sacred perfection of the universe, that I am One with all.

“That awareness and connection to faith transformed my life and healed me from all the ways I’d suffered. Now, I’ve been so blessed to be able to share the power of faith with so many others and to use it for so much good, ranging from women’s empowerment and equality to environmental protection to water preservation.”

Born and brought up in California, Saraswati moved to India in her early twenties. She quit her doctorate programme, divorced her husband and became a Hindu renunciate, someone who takes vows of chastity, simplicity and non-attachment.