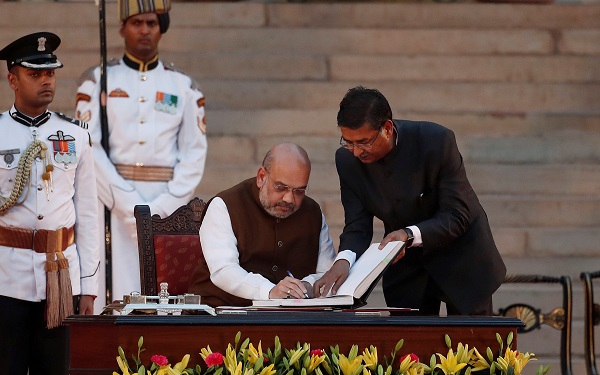 Amit Shah signs documents after taking his oath as a cabinet minister during a swearing-in ceremony at the presidential palace in New Delhi, India May 30, 2019. (Photo: REUTERS/Adnan Abidi)
Follow Us

Having masterminded the Hindu nationalist Bharatiya Janata Party’s landslide victory in the April-May general election, Shah had been tipped as a possible candidate for the finance ministry in recent days.

Sitharaman will become the senior most woman minister in Modi’s cabinet.

The previous finance minister, Arun Jaitley, had written to Modi asking not to be considered for a ministerial position due to ill health.

Sitharaman will take over finance ministry at a time when there is pressure from industry for the government to provide some stimulus to halt a worrying slowdown in Asia’s third largest economy.

India probably lost its spot as the fastest growing major economy to China in the January-March quarter as a chill in domestic and global consumer demand hit manufacturers and service providers. Data for the quarter is set to be released later on Friday.

Modi also named S Jaishankar, a former foreign affairs secretary, as India’s new external affairs minister. He will take over from Sushma Swaraj, the ruling party’s veteran leader and the previous most senior woman in the cabinet. She has also stepped aside due to poor health.