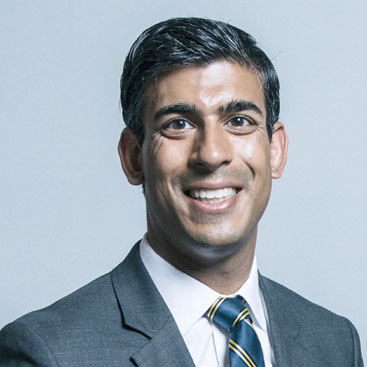 WHEN Rishi Sunak stood for election in rural Richmond, Yorkshire, in 2015, looking to take over William Hague’s old constituency and the safest Conservative seat in the country – left-wing journalists wondered somewhat hopefully if he would lose, perhaps because they liked to believe that northern Brits are racist Brexiteers.

They were half right. As it happened, Sunak was a Brexiteer himself but sadly – at least for those journalists – his colour was not held against him in the slightest by the Yorkshire voters in the 95 per cent white constituency. He was elected, though with the 19,550 major­ity down just a bit – and only because Ukip was rampant at that point.

In the 2017 election, which was otherwise catastrophic for the Tories and resulted in a hung parliament, Sunak increased his majority to 63.9 per cent, beating Lord Hague’s 62.8 per cent support in 2010. “Rishi has proved to be a diligent constituency MP and it was no sur­prise to see him re-elected with an increased majority in 2017,” commented Hague.

Sunak has, indeed, showed himself to be a serious and active local MP, concerned about both human and animal welfare, and commit­ted to action and communication in his North Riding seat – he has written at least one de­tailed and researched article a week on con­stituency matters since he was first elected.

In a sense, third-generation, British-Punjabi, Southampton-born Sunak is carrying on a fam­ily tradition. “I grew up watching my parents serve our local community with dedication,” he says. “My dad was an NHS GP and my mum ran her own local chemist shop. I wanted to make that same positive difference to people.”

It’s a familiar tale – his parents went the In­dian “save-up-and-sacrifice-for-education” route and sent their son to the £30,000-a-year Winchester College, a