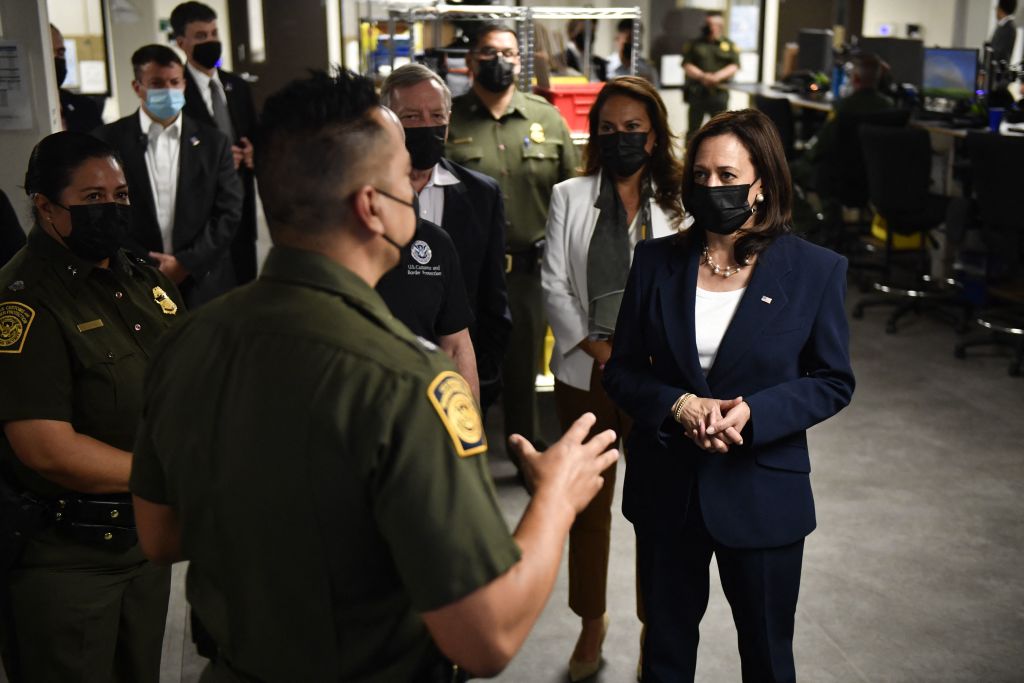 US Vice President Kamala Harris visited a border patrol facility near the US-Mexico border on Friday (25), aiming to counter claims from Republicans she has been slow to visit the region as part of her role addressing the root causes of immigration.

The trip, her first to the border since becoming vice president five months ago, was announced on Wednesday (23) and appeared to have been hastily put together days before a border visit by former President Donald Trump.

A White House official said Harris’s schedule was not dictated by what the Republican Trump does. “I can assure you we don’t take our cues from the former president,” the official said.

“I said back in March I was going to come to the border, so this is not a new plan,” Harris told reporters after landing in Texas. “Coming to the border … is about looking at the effects of what we have seen happening in Central America.”

Republicans have criticised President Joe Biden, her fellow Democrat, for rolling back restrictive Trump-era immigration policies even as migrant detentions at the US-Mexico border have reached 20-year highs in recent months.

In May, more than 180,000 migrants were apprehended at the border, according to monthly figures from Customs and Border Protection.

Meanwhile, the Biden administration has ordered to investigate conditions for migrant children at the Fort Bliss army base in El Paso, amid testimonials presented in court that conditions are desperate, reported The Guardian.

The administration has instructed [homeland security secretary Xavier] Becerra to do a thorough investigation of the conditions where children are being held in tents at the military facility, and report back to Biden and Harris, the report added.

Harris was not due to visit the secure facilities at Fort Bliss. Last month, Becerra announced he was walking back plans to house thousands of children younger than 12 there, after Democratic lawmakers and immigration activists protested that the facility did not meet basic child welfare standards, The Guardian report added.

The temporary shelter is one of a dozen or so makeshift sites the government set up to provide more capacity beyond the traditional, licensed shelters that the health and human services department oversees.

Immigration remains a hot-button issue for both parties. Democrats and pro-immigrant activists have pressed Biden to further scale back enforcement and ensure humane treatment of migrant children and families arriving at the border.

White House officials have for months said Harris’s efforts to stem immigration from Central America are focused on diplomacy and are distinct from the security issues at the border.

Harris, who visited the border as a senator and attorney general from California, was assailed by Republicans when she visited Mexico and Guatemala this month as part of her efforts to lower migration from the region into the US.

During that trip, Harris said she would visit the border in the near future but was focused on “tangible results” and “opposed to grand gestures.”

Nonetheless, Republicans criticized Harris for choosing El Paso rather than the area they point to as a hot spot for increased border crossings.

Theresa Cardinal Brown, managing director of immigration and cross-border policy for the Bipartisan Policy Center, a Washington-based think tank, said many Republicans have embraced Trump’s hardline immigration policies as they gear up for US congressional elections in 2022.

Harris was accompanied in El Paso by Homeland Security Secretary Alejandro Mayorkas, Chairman of the Senate Judiciary Committee Dick Durbin and Democratic Representative from Texas Veronica Escobar, who called the El Paso area the new “Ellis Island,” a reference to the famed area in New York Harbor that processed millions of immigrants as they entered the US in the late 1800s and early 1900s.

Harris is now facing accusations from legendary singer Nina Simone’s granddaughter of “taking away” the late legendary singer’s estate and handing it over “to white people”, according to a report in The Telegraph.

Lisa Simone Kelly said Harris, a trained criminal attorney, of bullying her mother to the point that she almost committed suicide when she was serving as attorney general.

“Nina’s granddaughter here,” Simone Kelly wrote on Twitter “My family doesn’t run her estate anymore. It was taken away from us [and] given to white people. Our family name was DRAGGED in the media. We get NO royalties, nothing. Wanna hold someone accountable? Ask Kamala Harris why she came for my family.”

She accused the VP of “breaching her fiduciary duty” when she allegedly drained up to $2 million from its coffers, including a $1.5 million deposit into her personal company, according to court records, the report added.

A 2016 settlement, regarding the Nina Simone Charitable Trust, referred to Harris multiple times for her “primary responsibility for supervising charitable trusts in California” as state attorney general.

The vice president’s approval rating has fallen in recent weeks, now hovering below Biden’s at 47 per cent. Other polls predict her winning the Democratic nomination should the 79-year-old president decline to run, but have her likely losing in a head-to-head with Trump.