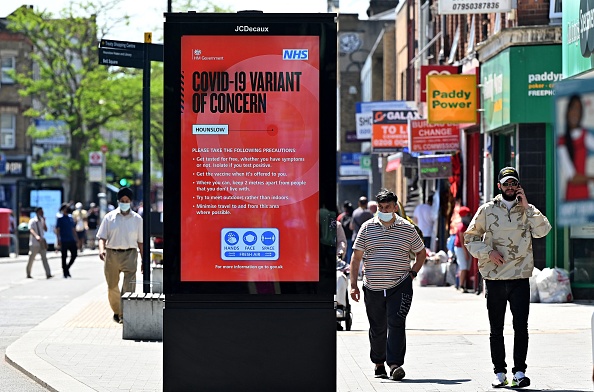 THE UK government is considering a delay of four weeks in lifting remaining Covid restrictions, a media report claims, amid growing concern over rapidly increasing cases and the higher transmissibility of the Delta variant.

Ahead of an announcement scheduled to be made by the prime minister Boris Johnson on Monday (14), a “quad” meeting has been scheduled over the weekend, The Guardian claims, adding that the four – Johnson, the chancellor Rishi Sunak, the Cabinet Office minister Michael Gove and the health secretary Matt Hancock – will decide whether to suspend or delay the planned unlocking of all legal limits on social contact.

Although no final decision has been taken, the report cited a government source saying that a delay of two to four weeks was likely due to the spike in cases that have triggered the fear of a third wave. Data is still being examined ahead of a final announcement scheduled for Monday, and a senior government source stressed the government was considering “options – plural” for step four of England’s roadmap.

Experts feel that a delay in unlocking will ensure to measure the impact of infections on hospitalisations and give time for more people to get their second vaccine dose.

Daily infections are now rising, pointing to a growth rate not seen since cases started to soar at the end of last year, with  8,125 Covid cases reported on Friday (11).

Meanwhile, the British Medical Association (BMA) has joined public health officials in calling for a delay in reopening.

BMA council chairman Dr Chaand Nagpaul said recently that it is not just about the number of hospitalisations, but “also the risk to the health of large numbers of younger people, who can suffer long-term symptoms.”

Apart from the medical community and public health officials, UK people also want to delay the reopening, claims a survey conducted by YouGov, which says that 53 per cent of UK voters want some lockdown rules to stay across the UK past June 21 while 25 per cent want all freedom-limiting legislation to remain.

Just 34 per cent of people said they would like life to go back to normal on June 21, as per the survey.

The last part of ending lockdown in England will see nightclubs reopen, and an end to restrictions on performances, weddings and other life events. Johnson has been facing mounting pressure to push back Freedom Day for the past few days.