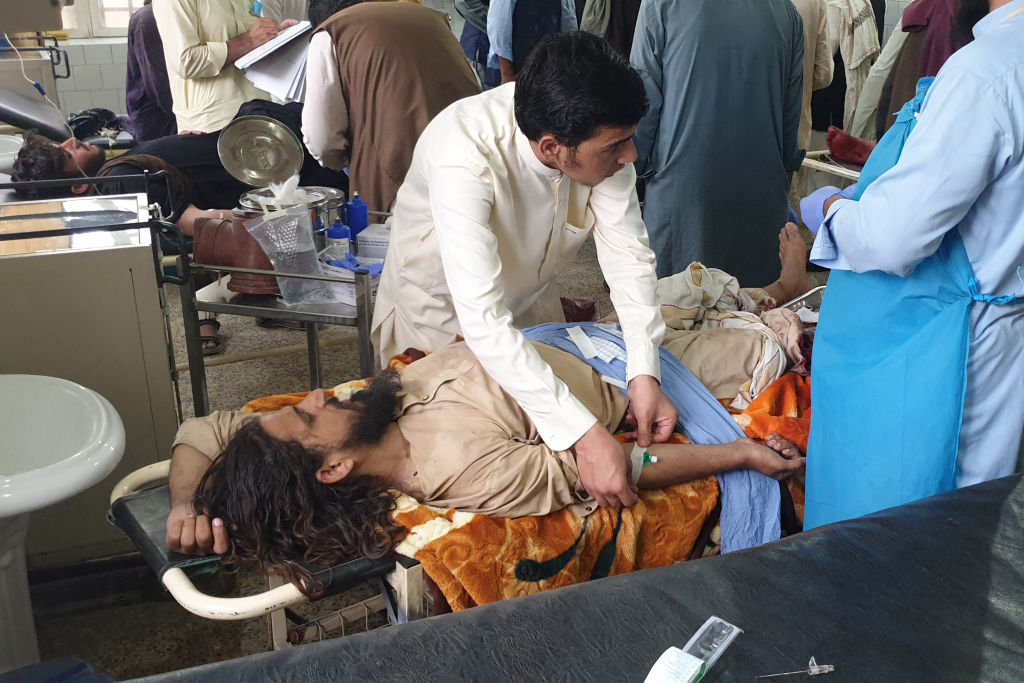 Paramedics treat men injured during fighting between Afghan forces and Taliban fighters, at a hospital in Chaman, a Pakistani town in the border with Afghanistan, on July 16, 2021. (Photo by ASGHAR ACHAKZAI/AFP via Getty Images)

AFGHAN forces clashed on Friday (16) with Taliban fighters in Spin Boldak after launching an operation to retake the key border crossing with Pakistan, as regional capitals stepped up efforts to get the warring sides talking.

Dozens of wounded Taliban fighters were being treated at a Pakistan hospital near the border after fierce overnight fighting.

“We have suffered one death and dozens of our fighters have got injured,” Mullah Muhammad Hassan, who identified himself as a Taliban insurgent, said near Chaman in Pakistan, about five kilometres (three miles) from the border.

The fight for the border comes as a war of words heated up between Kabul and Islamabad after the Afghan vice president accused the Pakistani military of providing “close air support to Taliban in certain areas”.

Pakistan strongly denied the claim, with a foreign ministry statement saying the country “took necessary measures within its territory to safeguard our own troops and population”.

“We acknowledge the Afghan government’s right to undertake actions on its sovereign territory,” it added.

Residents of Spin Boldak, which fell to the Taliban on Wednesday (14), said the insurgents and the army were battling in the main bazaar of the border town.

The border crossing provides direct access to Pakistan’s Balochistan province, where the Taliban’s top leadership has been based for decades, along with an unknown number of reserve fighters who regularly enter Afghanistan to help bolster their ranks.

As fighting continued, Pakistan said on Thursday (5) it would hold a special conference on Afghanistan in Islamabad during the weekend, although Taliban officials had not been invited.

There were signs that official talks in Doha – which have stalled for months – could stutter back to life.

An aide to Afghan president Ashraf Ghani told the local media that his government had asked for the Islamabad conference to be postponed as negotiators were already heading to Qatar.

The Taliban have capitalised on the last stages of the withdrawal of foreign troops to launch a series of offensives across the country, capturing a swath of districts and border crossings, and encircling provincial capitals.

Foreign troops have been in Afghanistan for nearly two decades following the US-led invasion launched in the aftermath of the September 11 attacks.

They have appeared largely out of the picture in recent months, but fears are growing that government forces will be overwhelmed without their vital air support.

The speed and scale of the Taliban onslaught has caught many by surprise, with analysts saying it aimed at forcing the government to settle for peace on the insurgents’ terms or suffer a complete military defeat.

An Afghan official said a local ceasefire with Taliban leaders had been negotiated for Qala-i-Naw, the Badghis provincial capital that saw fierce street fighting last week.