Migrants claiming to be unwilling victims of human trafficking or modern slavery should be sent back to the villages from which they came, MPs say in their letter to Rishi Sunak 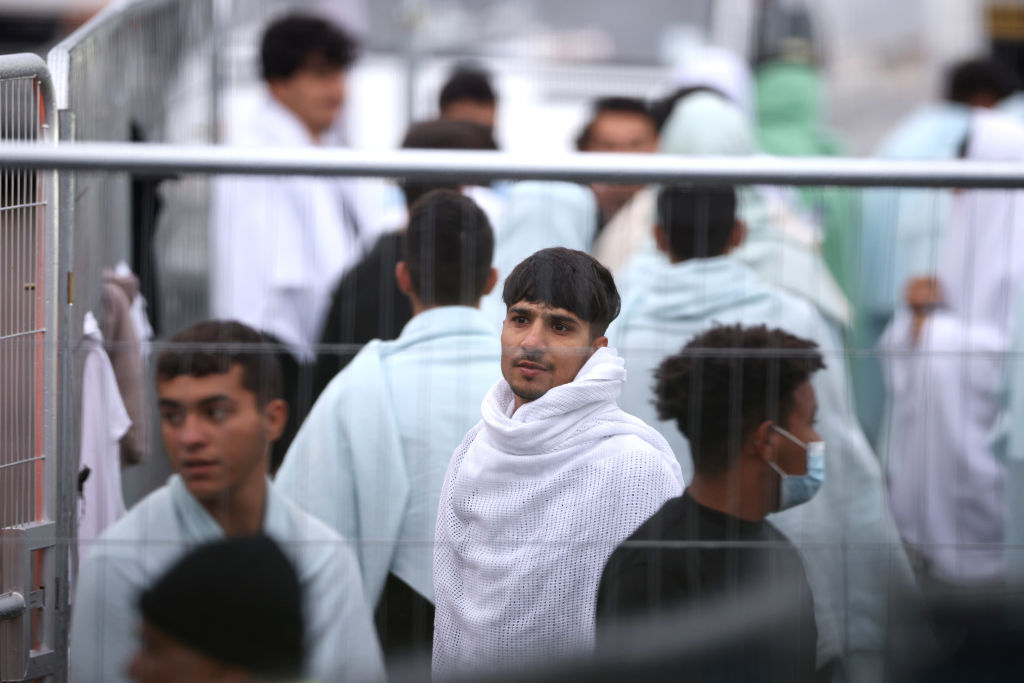 Residents at the Manston airfield migrant processing centre look on as Home Secretary Suella Braverman visits the site on November 3, 2022 in Ramsgate, England. (Photo by Dan Kitwood/Getty Images)
Follow Us

Conservative backbenchers have urged Prime Minister Rishi Sunak to make changes to modern slavery laws to enable the UK to send back “bogus” asylum seekers to their home countries easily.

More than 50 Tory MPs including former minister David Davis and 1922 committee chair Graham Brady have written to Sunak saying ministers could rapidly implement a “simple change” in the legislation to address the wave of illegal migrants reaching the UK’s shores.

Data showed some 42,000 migrants have illegally crossed the English Channel so far this year, a significant number of them being Albanians.

They said migrants claiming to be “unwilling victims of human trafficking or modern slavery” should be sent back to “the villages from which they came”.

“If they have really been taken against their will, then they could not reasonably object to being returned to their own homes,” they argued in the letter.

“The quirks in our modern slavery laws that prevent this are clearly in defiance of the aims of that law and should be removed,” the backbenchers said.

The letter from the MPs comes weeks after the National Crime Agency (NCA) revealed that Albanian migrants reaching the UK in small boats were told how to exploit modern slavery laws to avoid deportation.

Home Secretary Suella Braverman recently admitted the UK’s failure to control its borders but vowed to “fix” the “crisis” over illegal migration.

Separately, Davis insisted that asylum laws were created to protect people fleeing persecution and not those who escaped crime in their country of origin.

He said asylum permits should not be issued to applicants coming from countries considered safe.

He, however, did not blame Albanians themselves for the crisis the UK is facing.

The blame ultimately, “lands with the Albanian gangs who bring them here, not the Albanians themselves,” the former Brexit secretary told Sky News.