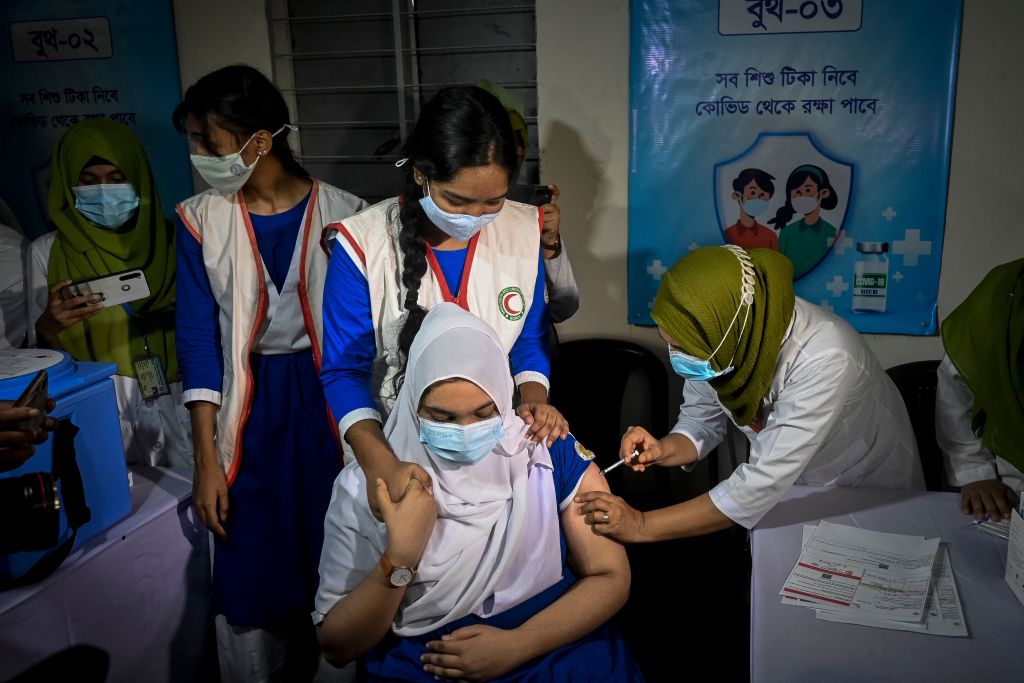 A health worker inoculates a student of a higher class with a jab of Covid-19 coronavirus vaccine inside a school in Dhaka on November 1, 2021. (Photo by MUNIR UZ ZAMAN/AFP via Getty Images)

THE UK donated more than four million doses of the Oxford-AstraZeneca vaccine to Bangladesh through the Covax mechanism.

Bangladesh’s fight against the pandemic and its economic recovery will be reinforced by the donation, the British government said in a statement on Thursday (23).

At the G7 meeting this year, the UK committed to donating 100 million doses by June 2022 and 80 per cent of the doses would be distributed through the Covax facility.

Like the rest of the world, the UK and Bangladesh have experienced difficult times because of the pandemic and “we are both in it together in building back better”, British high commissioner Robert Chatterton Dickson said.

“This vaccine donation by the UK is a powerful demonstration of Brit-Bangla bondhon between two countries. The UK will do everything we can to support Bangladesh to save lives and defeat the pandemic,” he said, referring to the ties between Britain and the south Asian country.

The UK government said more than half a billion doses of the Oxford-AstraZeneca vaccine have been delivered at a non-profit price globally, with two-thirds going to lower and middle-income countries.

It said it has been supporting Bangladesh to develop a national response plan to tackle the pandemic.

Bangladesh’s vaccination drive was disrupted earlier this year as India, which was faced with a massive tide of infections at home, suspended the supplies to its neighbour.