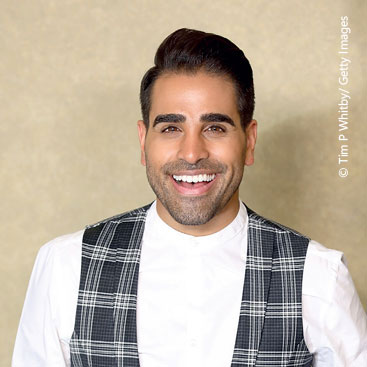 DR RANJ SINGH is a familiar face on TV, and most people know him as the good doctor who dispenses medical advice and more to viewers of ITV’s This Morning.

Anyone who sees him is immediately captivated by his charming personality and dashing smile, and this has earned him the title of Britain’s hottest children’s TV presenter.

But this wasn’t the case when he was growing up. In an interview, Singh said it wasn’t until he went to college that he had his first real date. “Dating was a complete no-no when I was a kid. Also, I was never really very attractive and wouldn’t get that kind of attention. So I threw myself into my school work and concentrated on that. I know, how boring. I do love being a geek though,” he said.

The 39-year-old from Kent was born to parents from Punjab and he grew up in a traditional, conservative Sikh household. His parents came to Britain with nothing, and they worked hard to provide Singh and his two brothers all the luxury they could afford.

Like most children from south Asian immigrant families, Singh too opted to go the conventional route when it came to choosing a career.

After graduating from school he moved to London to begin his career as a medical practitioner and he trained at various hospitals in the capital before becoming a member of the Royal College of Paediatrics and Child Health in 2007. He is currently an NHS doctor specializing in the health of young people at London’s St George’s and St Thomas’ hospitals.

It was while working as a medical practitioner that he stumbled into the world of television and since then he has been balancing his life as a TV personality and a GP. From 2012 to 2015, he