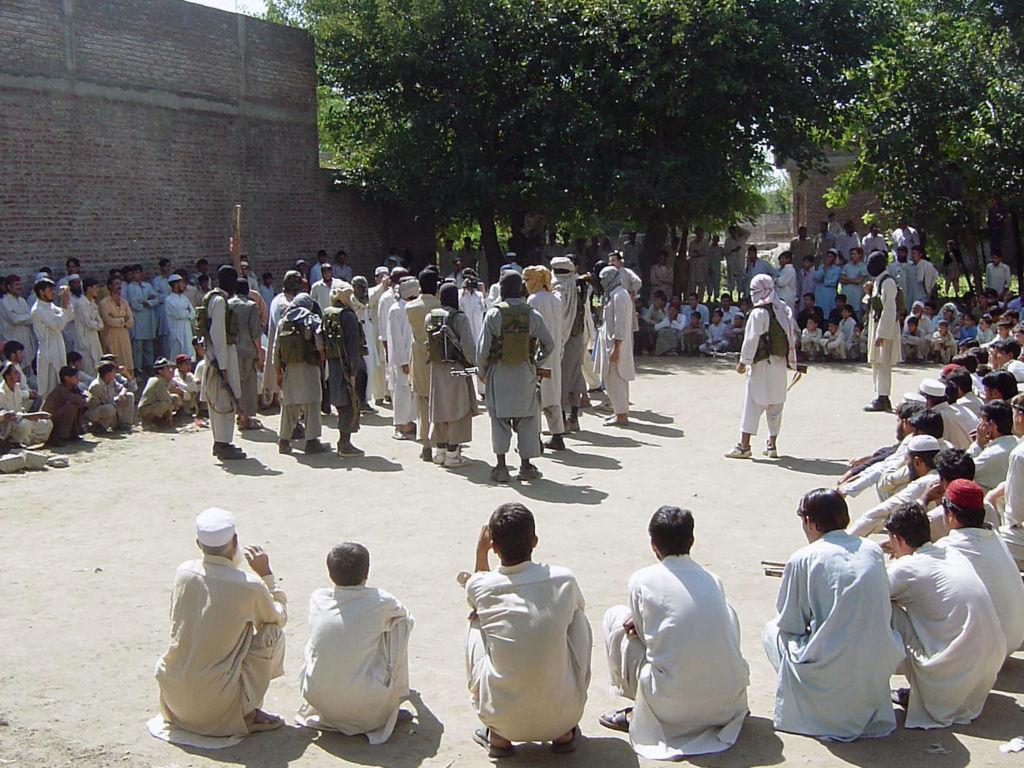 A file photo of Tehreek-Taliban Pakistan members surrounding a butcher, who allegedly sold the meat of animals slaughtered without following proper Muslim rites, before administering punishment during an open trial by the militants in Ningowalay village in Swat on September 25, 2008. Swat experienced numerous clashes and bombings since radical cleric Maulana Fazlullah launched a violent campaign to enforce harsh Islamic Sharia law in the region. (Photo by CHAND KHAN/AFP via Getty Images)

PAKISTAN on Monday (23) said the Afghan Taliban have assured that they would not allow their soil to be used against Islamabad by Tehreek-i-Taliban Pakistan (TTP) militants, amidst reports that several hardcore terrorists have been released in Afghanistan after the insurgents seized Kabul.

The TTP, commonly known as the Pakistani Taliban, is a banned militant group based along the Afghan-Pakistan border. It has carried out several major terror attacks across Pakistan, reportedly using Afghan soil.

Addressing a press conference, Pakistan interior minister Sheikh Rashid Ahmed said the government has taken note of the reports that the Afghan Taliban have set free some TTP militants, including its leading commander Maulvi Faqir Mohammad, after taking over the war-torn country, and it is in “full contact” with the Taliban on the issue.

“The related (Afghan) authorities there have been told to control those who have done terrorism in Pakistan. The Afghan Taliban have reassured (us) that Afghanistan’s land will not be allowed to be used in any case by the TTP,” he said.

A media report said Pakistan has handed over to the Afghan Taliban a list of “most wanted terrorists” linked to the TTP, who are still active in Afghanistan.

The list was shared with the Afghan Taliban leadership recently after they took control of Kabul, according to The Express Tribune.

“We have taken up the issue with them (Afghan Taliban). We have given them a list of wanted TTP terrorists operating from Afghanistan,” the report said, quoting an unnamed senior Pakistani official familiar with the development.

Besides, Afghan Taliban chief Haibatullah Akhundzada has reportedly set up a three-member commission to investigate Islamabad’s complaints that the TTP was using Afghanistan to plot cross-border terrorist attacks.

Pakistan destroyed the infrastructure of the TTP through successive operations in tribal areas since 2014. It is believed that most of the operatives ran across the border to Afghanistan.

According to a report prepared for the United Nations Security Council in July, the TTP has about 6,000 trained fighters on the Afghan side of the border and the Afghan Taliban, despite their distrust, carry on with relations as before.

The TTP had supported the Afghan Taliban in their fight against the previous Afghan government backed by the United States.