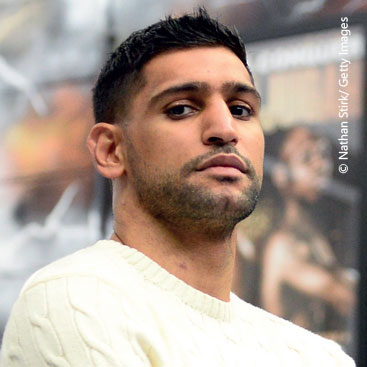 A INCIDENT-FILLED appearance on I’m A Celebrity, Get Me Out Of Here and marital woes saw Amir Khan’s face plastered all over news­papers and websites in recent months.

It felt like the once meteoric career of the boxer, who had been out of the ring for almost two years, was crashing and burning.

All that changed in April when he stepped into the ring at the Echo Arena in Liverpool and destroyed Canadian Phil Lo Greco in 39 pulsating seconds. It was the Khan of old, the lightning-fast hand speed was back and the Bolton fighter put the welterweight division on notice that he was back to claim a world title.

“That night was incredible,” Khan tells the GG2 Power List. “I felt great in training and was in great shape, but it was my first fight af­ter hand surgery so I wasn’t 100 per cent sure of how it would go. To go in there and blow him away in the first round was amazing.”

The 31-year-old dismisses suggestions that the surgery will hinder him going forward and that he won’t have the power of old. “You know, I broke my hand years ago and just never got round to getting it properly fixed. I knew I would be out for a long time if I had surgery and there were too many big fights to be had, so I fought on without having surgery. Now the hand is stronger than ever, and if anything, I will punch harder than before.”

Khan’s second comeback fight didn’t have the fireworks of the Lo Greco bout, but he still triumphed against Colombian Samuel Vargas in 12 gruelling rounds. The former Olympic silver medallist has now set his sights on a stadium fight against either old sparring partner Manny Pacquiao or long-time