In an article published more than half a century back, Arthur Lapworth recognised that polar reagents come under two classes which he termed: “Cationoid” and “Anionoid.”

So, let’s understand the concepts and Electrophile and Nucleophile differences.

Electrophiles are positively or neutral charged atoms or molecules having free orbitals for incoming electrons.

Nucleophile (labelled E / E in reaction mechanisms) is a chemical species that seeks a positive centre in a chemical reaction. It is like the nucleus of an atom since a nucleophile contains an electron pair available for bonding.

Electrophilic substitution of an electrophile to benzene, replacing a hydrogen atom.

Nucleophilicity also moves up while going down the periodic table. So by comparing the halides we get this hierarchy: I-  > Br- > Cl-  > -. But there are exceptions too.

One of the challenges of understanding nucleophilicity is because it is highly dependent on the electrophile.

π bonds donate a pair of electrons, but in this case, the pair is shared between two atoms. This happens in double bonds and the case of triple bonds (alkynes: R – CH = CH2, Benzene, etc.) as well as enols, aromatics, and enolates.

The key factor determining the nucleophilicity of π bonds is the presence of donor groups or atoms that can share electrons with the double bond to help stabilize it (after it has donated its pair of electrons to the electrophile). When a double bond reacts with an electrophile, the result is a carbocation.

For this, we can use the concept of electronegativity. For example, let us compare NH3 with H2O.

Incidentally, both the molecules by dint of their lone pairs can behave like a nucleophile by forming bonds, but the question remains, which one is better of the two? Let us find out!

Since nitrogen holds its lone pair more loosely than oxygen, it has a better chance of forming new bonds with another molecule by donating the electron pair.

Typical cases of Nucleophile and Electrophile: 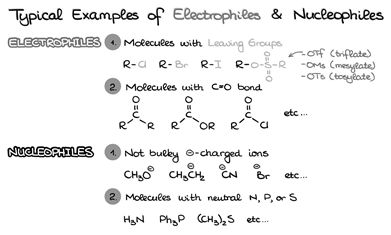 Typical electrophiles normally have good leaving groups like sulfonate esters or halides. They may also have polarizable C=O bonds like aldehydes, ketones, or carboxylic – acid – derivatives.

On the other hand, Nucleophiles can be some smaller negatively charged species or molecules with N, P, or S atoms.

Ans. Electrophiles and nucleophiles can be considered as the derivatives of atoms or molecules.

As a corollary to that, chemical reactions between organic and inorganic chemical species mostly happen through electrophiles and nucleophiles.

A more detailed view on the differences between Electrophiles and Nucleophiles are tabulated below:

Ans: Electrophiles are called Lewis acids because of their property to accept electrons.

An electrophile is formed when an atom or a molecule has secondary electrons and obeys the octet rule or has a positive charge that is required to be neutralized to become stable.

For example, Hydronium ion (H3O ) is an electrophile — it has a positive charge, and the hydrogen atom has free space for incoming electrons. Therefore, it can accept electron pairs from Lewis bases such as –OH to form H3O molecules.

Ans: Nucleophilicity indicates the strength of a particular nucleophile, and it depends on many factors such as charge, polarisability, basicity, etc.

This Global Literacy Day, learn everything about Life Insurance

Nike vs. Adidas: What’s the Difference and Which Is Better?

Know About A Gaming Community

Instagram Username Claims, Merges and Verifications (All You Need to Know)

What You Should Avoid Sharing on social media

Types of Insect Bites or Stings and Their Effects