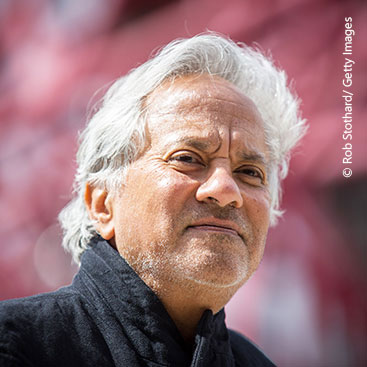 SIR ANISH KAPOOR’S sculptures have been shown around the world in the past year or so, most notably at the 2018 Summer Exhibition at the Royal Academy.

Here he was given pride of place in the An­nenberg Court at the front of the academy’s Burlington House headquarters in London’s Piccadilly on the historic occasion of the exhi­bition’s 250th anniversary.

Realising Sir Anish is always in demand, the exhibition’s curator, Edith Devaney, began ne­gotiations with the artist a year in advance. “He wanted to put in some­thing celebratory,” she said.

The result was Symphony for a Beloved Daughter, a steel, canvas, paint, graphite and ba­salt sculpture that became the exhibition’s “show stopper”.

He also merited a solo exhibition, Anish Ka­poor: Works, Thoughts, Experiments at the Ser­ralves Museum of Contemporary Art in Porto, Portugal, where the curators billed the show by stating: “There are few living artists of our time who have achieved the recognition and the renown of Anish Kapoor.”

One installation, Descent into Limbo, appeared to be a bottomless hole in the centre of the floor, but was in reality an 8ft-deep excavation painted with Vantablack, his patented pigment that is so black that it absorb 99.6 per cent of the light that falls on it. One man who thought the hole was merely a painted black circle, fell in and was taken to hospital with back injuries, but was fortunately not too badly hurt.

It was a year when Sir Anish asserted his Jewishness by distributing the $1 million from his 2017 Genesis Prize (also known as the “Jewish Nobel”) to five NGOs mostly engaged in easing the global refugee crisis.

“Like many Jews, I do not have to go far back in my family history to find people who were refugees,” Sir Anish said. “Directing my Genesis Prize