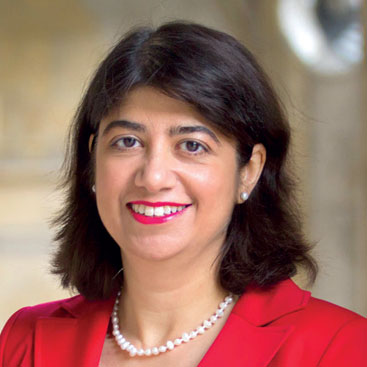 ONCE touted as Jeremy Corbyn’s secret centrist weapon, Seema Malhotra’s fallout with the party’s top brass – she resigned from the shadow cabinet in 2016 in a bitter public spat – should not belie her status as a rising Labour star.

The daughter of Indian immigrants who grew up over a shop in west London, her ini­tial elevation within the parliamentary party was swift. First elected as Labour MP for Feltham and Heston in 2011, and re-elected in both 2015 and 2017, she was appointed a shadow minister for women by Ed Milliband and shadow chief secretary to the Treasury in 2015 when Corbyn became Labour leader.

One of dozens of shadow ministers to resign in protest over Corbyn’s leadership in June 2016, Malhotra then made an unprecedented complaint to the speaker of the Commons. She called for an official Commons investigation, saying her staff had felt “harassed, intimidated and insecure” after aides to Corbyn and shadow chancellor John McDonnell had allegedly gained unauthorised entry to her office.

Despite her public rift with the leadership, Malhotra still maintains a high profile as a member of the Commons Select Commitee on Exiting the EU and remains an outspoken critic of Theresa May’s Brexit strategy.

Her views on economic issues are influ­enced by her childhood above the family shop. “Growing up in a small business, you see they are the lifeblood of local economies. For me it was the first introduction to public service – serving customers that came into the shop.”

One of five children, she was educated at a state school in the London borough of Houn­slow, then studied politics and philosophy at Warwick University before completing a post­graduate degree in Birmingham.

The founder of the Fabian Women’s Network, her first parliamentary promotion by Milliband to the newly created role of shadow minister for the prevention of violence against women and girls made her responsible for champion­ing the cause of victims of rape, domestic vio­lence sexual assault and female genital mutila­tion, issues for which she still campaigns.

Malhotra is married to management con­sultant and financier Sushil Kumar Saluja and lives in Chelsea. Referring to her modest fam­ily background, when her parents’ business sometimes struggled to make ends meet, she says: “You have to have politics that’s going to be on the side of people in tough times.”