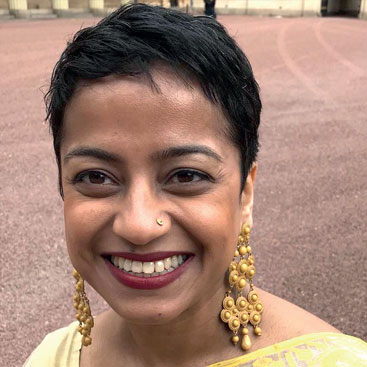 ONE of the founders of Mental Health First Aid (MHFA) England, and until June its CEO, Poppy Jaman was responsible for training 300,000 “mental first-aiders”.

Under her guidance, the MHFA went from being a small outpost of the government’s Na­tional Institute of Mental Health in England (NIMHE) to one of Europe’s fastest-growing not-for-profit SMEs.

Last year, the-then health secretary, Jeremy Hunt, named Jaman as one of England’s fore­most experts in mental health, an accomplish­ment solemnised in the 2018 honours list when she received an OBE in recognition of her services.

Her interest in mental health was sparked, she believes, by her own experience of growing up as what she calls a third-generation Bangla­deshi in Portsmouth. She now thinks it was complications over her identity, combined with a “perfect storm” of adverse childhood condi­tions including racism, deprivation, poverty, culture and gender issues, that contributed to what was diagnosed as post-natal depression but was probably a more general mental crisis.

Jaman was, in fact, born in Bangladesh. Many years ago, her grandfather had signed on for the merchant navy of the old East India Company (hence the Portsmouth connection), and her father was born here. He returned to Bangladesh to marry, and brought Poppy back to the UK as an 18-month-old toddler in 1978.

It was a traditional family life, with very lit­tle money, marooned in a foreign land, and al­though Jaman was clever and happy at school, there was the issue of everyday racism – some of it overt, such as peltings of ketchup and eggs, some of it glancing or assumed.

For example, when she was excluded from a school sports photograph, it wasn’t because of her skin colour, but rather that the other girls were all wearing gym skirts while, as a Mus­lim, she had on leggings, so the symmetry or uniformity of the team appearance would have been disturbed. Jaman said that although she didn’t think twice about it then, deep down she believes she obviously did.

But she certainly thought twice when, as a 13-year old, on the first evening of the family’s life in a new house, a brick wrapped in a mes­sage of racist abuse, was thrown through the living room window. As the family’s senior English speaker present (her father was at work at a restaurant) the teenager had to deal with the police.

She was split in half – she had grown up ac­ademically gifted and a Briton out-of-doors, while back at home things remained heavily traditional. All too soon afterwards, the bright girl went through an arranged marriage, which didn’t last, and following quick motherhood at 17, she started to come apart.

Jaman discovered that while she might have suffered in extremis, the matrix of problems that led to her mental suffering was common to many people. So began an interest in mental health that turned her into an advocate.

It is impossible to overestimate the long-term value of what Jaman, now happily remar­ried with four children, is doing. Following her departure from MHFA over the summer, she has been devoting time to the City Mental Health Alliance, which she helped to set up in 2013 and has been CEO of since 2015. “In my mind I’ve got 10 years for another big thing to do,” she says.

She is working on making certain that just as every workplace in the country has a first-aider who can deal with medical emergencies until help arrives, so there should also be a designated responder for mental crises.

“About 300,000 people with long-term men­tal health issues lose their jobs each year and the most recent Mental Health at Work report from Business in the Community showed that up to 1.2 million face dismissal, disciplinary action or demotion for disclosing a mental health issues at work,” says Jaman.

“With an estimated cost to employers of £35 billion a year, neglecting basic mental health support in the workplace is damaging both hu­man and economic potential.”