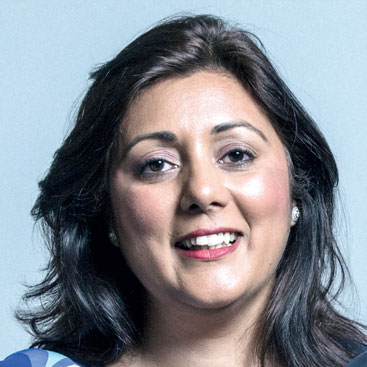 NUSRAT GHANI has a lot of firsts to her name. Earlier this year, the Kashmiri-origin parliamentarian achieved a rare feat, becom­ing the first female Muslim minister to speak from the dispatch box in parliament.

In 2015, she became the first Conservative party Muslim female candidate to be elected to parliament, and in 2017, she made history after she took the oath of allegiance to the Queen in Urdu.

At the time, her aim was not to make history. “My motivation was simple. My parents were incredibly proud that I had been elected to serve as MP and I wanted to honour my mother by speaking in a language she understands and my mother tongue,” she said.

Born in Birmingham to parents who migrated from Kashmir in Pakistan, Ghani’s entry into politics wasn’t an easy one. Politics was not discussed in her home and her neighbours had been on welfare for two or three genera­tions. There was no pressure on her to get an education: in fact, she is the first girl in her family to have gone to university. On the con­trary, she faced opposition in wanting to go to school and university, but Ghani was deter­mined to get a good education.

She studied in state schools before going on to study politics at Birmingham’s City Univer­sity. She then got a masters’ in international relations at Leeds and took up a job in the fi­nancial sector. However, she soon realised that banking wasn’t her future, and went on to work with charities such as Age UK and Breakthrough Breast Cancer, as well as the BBC World Service.

It was only in 2010 that she made her entry into politics. Although she suffered a setback when she lost to Labour’s Shabana Mahmood, Ghani won the Wealden, East Sussex, seat in 2015 and found herself on the Home Affairs Committee. The 2017 election saw her return­ing to parliament for a second stint.

Today she is the transport and maritime minister and is involved in charting plans to get young people interested in engineering. Her department has tied up with teachers and firms such as Apple and Siemens to change the way young people view the subject.

She also believes in diversity in politics and wants women from different backgrounds to realise there are others like them in the Commons.

Ghani has also been involved in producing reports on a number of different issues such as security, hate crime, policing and immigration. In 2016, she joined forces with Barnardo’s, the UK’s oldest children’s charity, to undertake an independent inquiry tackling harmful child sexual behaviour. Last year, she was promoted to chair the government’s Apprenticeship Di­versity Champions Network.

When she is not busy with politics, Ghani spends time with her daughter Farah, who loves cricket and enjoys baking. Ghani is mar­ried to David Wheeldon, Sky’s director of policy and public affairs.