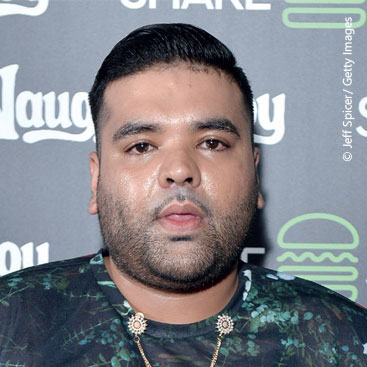 WATFORD-BORN Shahid Khan had a quirky and unusual entry into the music business.

He went on the Channel 4 game show Deal Or No Deal and scooped £44,000, allowing him to set up a studio at home in his parents’ back garden by building a shed, and sign artists and produce music himself.

Khan is now one of the most in-demand music producers on the planet. Known by his stage name Naughty Boy, he has graduated to a studio on the old Ealing Films studio plot.

There are no obvious discernible Asian in­fluence in most of Khan’s popular music, but his sense of style, energy, and passion is partly derived from the verve and ubiquity of popular Asian culture in Britain; and as he evolves, it may well become more apparent.

In May, his popularity won him the People’s Choice Award at Eastern Eye’s ACTA Awards, when he topped a poll by readers of the paper. He typically downplayed it, saying he wasn’t an “awards person. I don’t make music because I am Asian, I make it because it’s in my heart.”

Accepting the award, Khan made a plea to give young people with imagination a chance and said the community should better respect those who are creative and didn’t want to be doctors, lawyers or accountants.

His entry into the music business wasn’t that unusual in itself – when his parents went on shopping trips to Luton or Southall in Lon­don, he would pick up Bollywood cassettes and play and dance to them with his sister. He taught himself how to play the piano and learned how to produce music, (often mixing) on a home computer.

Khan eschewed a music course, knowing his parents would not approve. He enrolled on a business-related degree at London Metropoli­tan University (at the time known as London Guildhall University) but dropped out and got a £5,000 grant from the Prince’s Trust to get started in the music business. That and the No Deal money meant he could at least have a go at achieving his dream.

His most popular find was Emeli Sandé, a Scottish medical student with an incredible voice – it was reported they met by chance at BBC Radio 1Extra and clicked. They were both unsigned and invited to the BBC as artists in that bracket.

In a 2013 interview, Khan said he knew San­dé had star quality and was determined to work with her. He focused on simple songs with strong lyrics and the awards and acco­lades that followed showed they both had star quality in terms of their musical ability. They ended up writing tunes together and contributed to major US artist Chipmunk’s hit, Diamond Rings.

Khan also had a big hand in Sandé’s album, Our Version of Events, which went on to sell one million copies. He signed a contract with Sony ATV and secured an album deal with Vir­gin Records (EMI Records).

Talking to a celebrity magazine, Khan said he would never consider being a judge on one of the reality TV music competition shows as he couldn’t reject young people. He wanted to help them and assist those who didn’t want to be on TV when they started out.

Today, Khan is one of the most powerful fig­ures in the music business far beyond these shores. He continues to work on his second al­bum, a follow-up to his hugely successful Ho­tel Cabana. The album features work by Sandé and a host of collaborations with other top art­ists, including Rahat Fateh Ali Khan (nephew of the legendary qawwali singer Nusrat), Ed Sheeran, Sam Smith and Wiz Khalifa.