Mishal Husain has won accolades for her TV and radio work 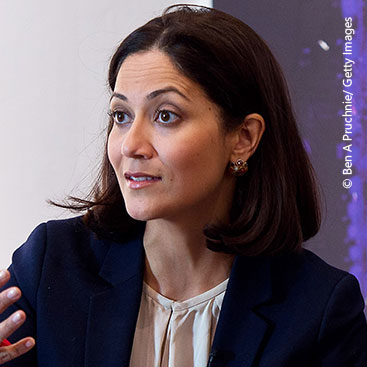 IF ONE was a member of the royal family, seeking a respected journalist to conduct a world-first TV interview with you and your betrothed, following the announcement of a royal engagement, then BBC radio and televi­sion presenter Mishal Husain is just about the perfect candidate.

At least Prince Harry seemed to think so, af­ter he handpicked Husain for his and Meghan Markle’s first joint TV interview following the announcement of their upcoming nuptials in November 2017.

Some have speculated that the Prince was particularly drawn to the 45 year old’s ability to seamlessly combine the requisite air of gravi­tas, with an unstarry, down-to-earth persona.

To consider the BBC Radio 4 Today presenter to be a soft touch, would however, be a long way off the mark. Just ask Boris Johnson and new Brexit secretary Dominic Raab.

In February 2018, Husain made Johnson look ever so slightly silly by her incredulous response to his likening of the operation of a potential border between Northern Ireland and the Republic, to that of a border between Westminster and Camden.

The previous year, her interview style had drawn a complaint from Tory HQ after she exhorted the-then foreign secretary, “No, no, please stop talking”, during a somewhat prickly exchange, following the London Bridge terror attacks.

Raab did not get off much easier either, during his first interview following prime minister Theresa May’s announcement of her Brexit compromise plan at Chequers in summer 2018.

“You are in charge of this, are you?” She fired at Raab, “Because this clearly wasn’t David Davis’s plan. Are you now in charge of putting this through, or is this about Olly Robbins and Theresa May?”

Even the BBC’s director general Sir Tony Hall was forced to suc­cumb to Husain’s journalistic rig­our, when the Corporation chose her to interview him