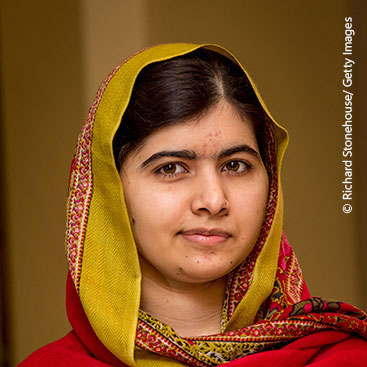 ALTHOUGH among the world’s best-known educational campaigners, Malala Yousafzai has been principally focusing on her own education.

The girl who was so brutally targeted by the Taliban in 2012 has blossomed into an iconic global figure with a Nobel Prize for peace to her name (in 2014).

Her straightforward manner, her power as a speaker and her tireless commitment to the cause of education have endeared her to young and old alike. And many of the world’s leaders listen if Malala is in town. So famous is she that the moniker, Malala, is enough these days.

She used to be described as the world’s most famous school girl, but she is now at Oxford University and has just completed her first year at Lady Magaret Hall reading politics, philosophy and economics (PPE).

She continues her charity work in her time off, spreading the message of the Malala Fund, which seeks to support young people get an education and is especially active in assisting girls with their schooling and combating dis­crimination and inequality. The Fund is now active in Pakistan, Afghan­istan, India, Syria, Nigeria and Brazil.

Her most prominent initiative within this is the Gulmakai Network: these are education champions based in a particular country who help to recruit and train women teachers, one of the most simple and effective ways of tack­ling a prejudice about girls going to school.

The Fund reckons some 130 million girls are denied access to school across the world. And while this work continues to be principally in developing countries, with the advent of the #MeToo and #TimesUp campaigns in the West, Malala recognises there is work to be done here too in challenging all forms of patriarchy and discrimination.

Her visit to the UN in New York in 2013 on her birthday was very much the catalyst for the Malala we see today. In that famous chamber, she deliv­ered a speech of electrifying dimen­sions. She put education centre­stage and declared in her own imitable way that the pen was the mightiest weapon anyone needed to fight oppression.

Her Fund has a wide array of supporters and backers. It has a leadership council made up of individuals who both donate and provide strategic advice. Among this group is Tim Cook, the chief executive of Apple, and Joe Gebbia, who helped to found and build Airbnb. On her board, she has an ex-US ambassador and other heavy-hitters from the world of philanthropy, diplomacy, education and outreach.

The UN declared her birthday, July 12, as Malala Day and every year she visits a new country on this day. Previous trips have taken her to Syria, Jordan and Nigeria.

This year as she turned 21, she went to Brazil, a country not universally recognised as having a problem with educating girls, but there she discovered a huge divide and common issues.

The population is just over half indigenous and of African heritage in its origins, and the other half has European ancestry. The former two groups fare much worse in education, while a broader group of women face domestic abuse and even death at the hands of violent partners. While 70 per cent of Brazil’s white population pass out from high school, the same figure for black children is just 30 per cent and indigenous communities fare worse.

Malala’s visit helped to highlight these is­sues and everywhere she went, she drew huge crowds and warm expressions of sisterhood and belief in her mission.

When she travels, there is something of an entourage – more than just security, her Foun­dation staff and her father, Ziauddin, whom Malala has called her main inspiration and guiding light.

On the trip to Brazil were social media stars who believe in Malala and her goals and cham­pion them through their own massive following. One such person is Jérôme Jarre. He has nearly two million followers on Instagram and founded something called #LOVE­ARMY; wearied by the pressures of commercial blog­ging and critically unfulfilled, he ditched spon­sored endorse­ments for ac­tion against the world’s ills. He now raises money for good causes and brought in over £5 million to help Somalia and the Rohingya.

Another social media star with Malala in Brazil was Elaine Welteroth. Once of part of the Vogue empire, (she was the first editor of Teen Vogue in the US), she is now a brand in her own right and is more influential than her nearly 300,000 followers on Instagram would suggest. She interviewed Malala as the Fund set up its first Gulmakais in Brazil.

Many have predicted a political career – Malala has cited Benazir Bhutto, the first woman prime minister of Pakistan, as one of her heroes – but as she gets older, she appears more cautious about making such pronounce­ments and there is almost a discernible change in step. She wears heels and lip gloss and enjoys listening to pop music and following cricket.

Yes, she is a young woman with the world at her feet, but she wants as normal a life as pos­sible. At university, she is just Malala, another student with books to read, essays to write, and friendships to nurture. She lives in student digs and has the same trials and tribulations of anyone in such a situation.

Her father says since she has been at uni­versity, he has noticed a different Malala, one who is more confident and stronger. There isn’t a boyfriend yet, but Ziauddin said he would not be shocked. He had a love marriage himself and so he could not be hypocritical.

She isn’t universally liked in Pakistan, which she visited briefly last year. Some see her as a western stooge and not sufficiently Islamic (in outward appearances) to be a role model.

She told her principal biographer, Christina Lamb, who helped to pen the successful I Am Malala that she saw herself continuing the work she has started after her Oxford days are over.

Malala is reported to be working on a book about refugees next and in it she will return to her own story. How the village girl, passionate and committed to education, dodged death, thwarted the Taliban and became a global icon no world leader can afford to ignore.

And it is powerful, she maintains, not be­cause she managed to do all this herself, but, “I tell my story not because it is unique but because it is the story of many girls.”

The challenge from her to us is to change that narrative.