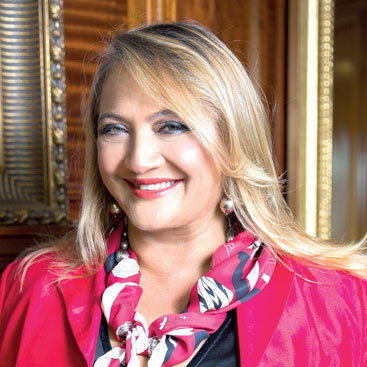 SHE is described by some in the media as the diva of divorce, but that does little justice to the many achievements of Ayesha Vardag.

The Asian lawyer set up her eponymous specialist divorce and family law firm in 2005 from her home in north London. Five years later, Ayesha Vardag Solicitors became Vard­ags, and today it claims to be the go-to firm for some of the most high-profile divorce cases in the country. The full-service law firm has of­fices in London and Dubai.

Among Vardag’s most recent cases was for­mer beauty queen Pauline Chai, who was awarded £64 million in 2017 in her divorce from Laura Ashley owner, Dr Khoo Kay Peng. During legal proceedings, the former Miss Ma­laysia used a loan which this year has become the Access to Justice Fund. Announced by Var­dags, the £10m pot is aimed at helping the “weaker party” in a divorce fight.

“The party who has been kicked out of their home, starved of finance and abused, economi­cally or otherwise,” Vardag told the media.

She has also campaigned to change English law so as to permit a no-fault divorce, which the government is consulting on.

Another career highlight is from 2010, when Vardag, representing a German heiress, Katrin Radmacher (fighting her French banker hus­band), led a landmark supreme court case (Radmacher v Granatino), which led to changing English law to ensure that prenuptial agree­ments could be legally enforced in the UK.

In Young v Young, Vardag secured a record-breaking award for the wife, Michelle Young, in the high court in 2013, despite the fact that her husband, property entrepreneur Scot Young, had declared bankruptcy. The couple separated in 2006, with Scot claiming that his business empire had collapsed. However, Var­dags successfully argued on Michelle’s behalf that he had hidden his vast wealth in a series of complex offshore trusts.

The judge found that Scot had hidden £45m from the court and ordered him to pay £20m to his wife, plus costs of £5m (believed to be the largest cost order ever made in family pro­ceedings) and maintenance arrears totalling £1.5m. This was the largest-ever award against a declared bankrupt.

Vardag also led her team to secure the high­est-ever award after an overseas divorce in the Al Baker v Al Baker case with Sareh Al-Baker winning £63m in 2016.

Born to an English mother and Pakistani fa­ther, once the south Asian country’s youngest ever senator, Vardag grew up in Oxford and graduated from Cambridge. She worked on re­search projects at the International Court of Justice in the Hague and at the UN (IAEA) Le­gal Division in Vienna, and helped draft the nuclear energy Safety Convention. Her firm Vardags was declared the fastest-growing law firm in Europe’s FT 1000 rankings of 2017.

She runs a graduate training programme that finances top-performing graduates out of university and her flexible parental packages have been described by some as “the Rolls Royce of childcare schemes”.