After his successful debut in Bollywood with the film Student of the year, the actor has given a mix of some hits and some flops, however, his latest release Ittefaq came out to be a winner and his performance in the film was appreciated.

During an interview with a leading Indian daily, Sidharth was asked to share his experience as he completes 5 years in Bollywood and what does he take away from the experiences. The actor said, “I now understand that everyone has [their own] work to do. And it did take me a while to get that. Now, not understanding [things] or being awkward about them is not an issue at all, because I know that we all lead very busy lives. However, we’re still emotionally connected with the people we have worked with.”

Talking about his relationship with his co-stars, Sidharth further added, “Yes, that’s true, and I feel it happens only because of the intensity of the moments that one spends with them. After all, you’re working alongside them 24/7. It’s all about understanding that, and it comes with experience and teaming up with different people. changed the way you work? I want to excel and try new things when it comes to playing characters. I also feel that since I’m not a trained actor, I learn a lot of things on the job. Now, I love getting into the screenplay and dialogues. I now believe in doing more background research [for my characters]. So that is the top priority, and as we have seen this year, content is king.”

Sidharth further shared his opinion about acting, he said,  “After all, it is the most unpredictable profession. We have no clue what works and no one has a fixed formula per se. So, I think the only advice that I got was to look forward. I was advised, ‘As difficult as it could be, you have to detach yourself from this aspect (setbacks), pick yourself up and move on’. And I took that advice seriously. And so, now, I have started working way harder on my future projects.”

Sidharth is currently busy prepping up for his next release Aiyaary, helmed by Neeraj Pandey which is scheduled to release on January 26, 2018. 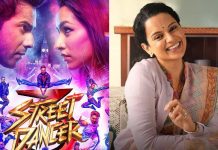