Arsenal’s Vinai Venkatesham has ambitious plans for the club 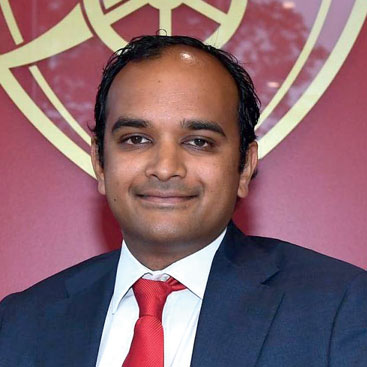 A FOOTBALL club is not only a sports and so­cial club, it is also a living thing that binds to­gether families and communities and, in the case of a really big team such as Arsenal (the sixth most valuable club in the world accord­ing to Forbes), is at the centre of a huge global network of fans and sponsors.

On the day the GG2 Power List met Vinai Venkatesham, he could look out of his office window and see the Emirates Stadium com­plex from the inside.

He has a different office now, probably with an even better view. As Arsenal’s chief com­mercial officer, he was a vital part of the club’s functioning and its global success – so much so that when CEO Ivan Gazidis left in September to join FC Milan, Venkatesham was promoted to managing director.

Since he arrived in 2010 (“I was brought in to look after sponsorship sales and the spon­sorship servicing team, and there were two and-a-half people in that team”) his role has grown exponentially. He is now responsible for 10 areas including partnerships, hospitality, marketing, CRM and business strategy, plus the retail and arsenal media teams, and 200 people in total.

Venkatesham’s doctor father came to the UK on his own from Hyderabad in India in the early 1970s. “The idea was he would get a base before my mum came over. He arrived in Lon­don with no money and his first job was in Newcastle. He had never been cold before, never seen snow before…”

Eventually the family settled in Twickenham and ran a medical practice in nearby Chiswick. His mother managed it and his father retired only last year, handing over to his doctor sister, who was born here (“Pretty quickly – my sense is quicker than they were planning!”) six