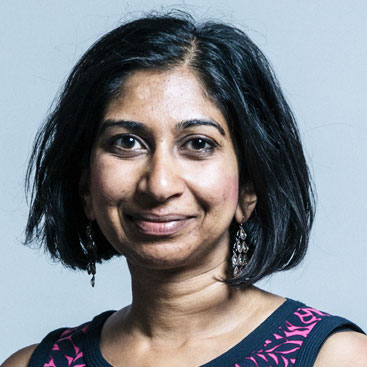 “FAKE news” was the Tory MP for Fareham’s reaction to press reports over the summer that she had left the government in protest over its Brexit strategy.

An ardent ‘leaver’ who chaired the pro-Brexit European Research Group of Conserva­tive MPs, Suella Braverman’s spat with the media came amid claims she had followed her erstwhile boss, David Davis, who quit as Brexit secretary over Theresa May’s Chequers plan.

As the GG2 Power List went to press, Braverman remained resolute in her ministeri­al position at the Department for Exiting the European Union. “I didn’t resign,” she insisted. “I’m supporting the position of the govern­ment, I’m supporting the prime minister and I want to deliver a really good Brexit.”

A lawyer by profession, Braverman was first elected to parliament as MP for Fareham in 2015 and was re-elected at the 2017 snap elec­tion with more than 35,000 votes.

Apart from the issue of Europe, she has taken a particular interest in education, home affairs and justice. Following the 2017 polls, Braverman was appointed par­liamentary private secretary to Treasury ministers. During the January 2018 reshuffle, she was appointed parliamenta­ry under-secretary of state at the Depart­ment for Exiting the European Union.

The daughter of immigrants who “came to the UK with very little”, Braver­man’s personal mantra is “aspiration is my in­spiration.” She is a passionate believer in meri­tocracy as a force for social and individual good, which she sees as the guiding ethos of the Tory party. “I’m a Conservative because we are the party that says it doesn’t matter where you start.

“You can make your life and that of others better by taking responsibility, self-empower­ment and service. Aspiration, to me, means re­warding endeavour, enabling compassion and liberating people from the shackles of the state.”