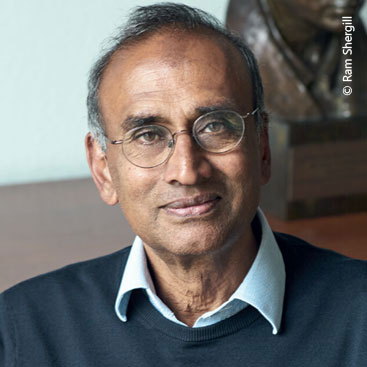 THE problem with most scientists is that they cannot write in a sufficiently engaging way – at least for the lay reader. And those who can write often do not have an understanding of the intricacies of the science.

Prof Sir Venkatraman (“Venki”) Ram­akrishnan, winner of the 2009 Nobel Prize for chemistry and president of the Royal Society, is the exception.

His memoirs, Gene Machine: The Race to Decipher the Secrets of the Ribosome (One­world; hardback £20), published last month, may well turn out to be one of the most popu­lar science books since Stephen Hawking’s A Brief History of Time. It is a fun read and also very simply written.

In one witty chapter, The Politics of Recogni­tion, he writes about the “corruption” that can be caused by the awarding of prizes which, in his opinion, can distort coverage of the day to day work done by scientists.

He writes about the Nobel Prize that “some hanker after it so much it changes their behav­iour… It makes them deeply unhappy and frus­trated when, year after year, they fail to get one and is a disease I call pre-Nobelitis”.

“After the prize, there is post-Nobelitis…. They are asked for their opinion on everything under the sun, regardless of their expertise, and it soon goes to their head,” he adds.

Sitting in the small cubicle that serves as his office at the LMB (the Medical Research Council’s Laboratory for Molecular Biology) in Cambridge, he talks about his book and also what he hopes to achieve in the two years that he has left from his five-year term as president of the Royal Society, the world’s most prestigious gath­ering of scientists.

“The president has an effect in terms of setting priorities and exercising leadership.”

For example, he wants Brit­ain to remain open to the free flow of scientific talent, especially after Brexit, and he also strongly advocates the teaching of science for all pupils right through school and possibly into university.

At the entrance to the ultra-modern LMB building, which wouldn’t look out of place in Silicon Valley in California, there is a large model of the double helix, representing the discovery of DNA in 1953 by Francis Crick and James Watson. From what Venki says, his baby – the ribosome – is just as important.

“So it has links to the origin of life and a central role at the crossroads of biology. One goal is to get people to appreciate what an amazing and important molecule it is and how central it is to life.”

Another is to explain “how science depends on lots of people contributing at different stages, sometimes collaborating, sometimes competing. Scientific enterprise is not some smooth linear process – it is full of human fail­ings as well as human tenacity and brilliance.”

The point about scientists being able to come and go, attend seminars and not be de­nied entry on the whims of visa officers is a crucial one. “If you look at my career, many of my key moments were when I talked to some­one, got some idea which I could then use in my own work.

“That is how science progresses. So the thing is to ensure we don’t develop this reputation that we are a country trying to keep people out. Top scientists have a choice of destinations – if we get perceived as not an open society that’s not great for us.”

He also does not want children to drop sci­ence at school and feels the population as a whole should be aware that “we are facing in­creasingly disruptive changes due to technol­ogy. We have one of the narrowest education systems in the world. So the Royal Society is doing a lot of work on developing a broad-based curriculum.”

Venki, now 66, settled in Cambridge in 1999 after a career in the US, where he went at 19 after getting his first degree in Baroda in India.

In July there was a moment of joy for his entire family. He calls it a “coincidence” but Venki was in the chair when his 59-year-old sister, Lalita Ramakrishnan, who now also lives in Cambridge, was admitted as a fellow of the Royal Society for her “path-breaking work on tuberculosis”.

Also present was their father, Prof CV Ramakrishnan, a biochemist who, with his wife Ra­jalakshmi, went from Madras (now Chennai) to establish the department of biochemistry at Maharaja Sayajirao University of Baroda in 1955.

Venki recognises that being president of the Royal Society is “a real privilege. Also by acci­dent, I am president at a particularly important time in British history so it is very important that I try and do a good job and make sure that we get a good agreement as a result of Brexit.”

“There are two or three things I care about,” he reveals. “British science has always benefited from being outward looking, attracting talent from all over the world. We want to make sure that doesn’t change. You sometimes hear this talk about cutting down immigration. What you can’t do is give the impression that you don’t want anybody to come here. That’s a very neg­ative impression.

“We are a global marketplace for talent so it is important for us to be able to attract people from all over the world, especially from Eu­rope. We have had long-standing collabora­tions which would last for decades – both large-scale and small-scale collaborations with our European colleagues.

“My view is we should do our very best to preserve those links and those collaborations.”